Once the “Alaskan Assassin” known as Joleen White announced her plans for Boise 70.3, we decided to make it a regional Triple Threat Triathlon team event… I mean, how often can you meet up with your Anchorage teammate? We rallied the troops and were able to have 7 of us in attendance, with 6 states represented: Alaska, Washington, Oregon, Utah (x 2), Colorado, and Hawaii. We rented a place for the team through VRBO, and our Colorado teammate Stewart even doubled as an amazing team chef and bike mechanic. Overall it was an awesome weekend. 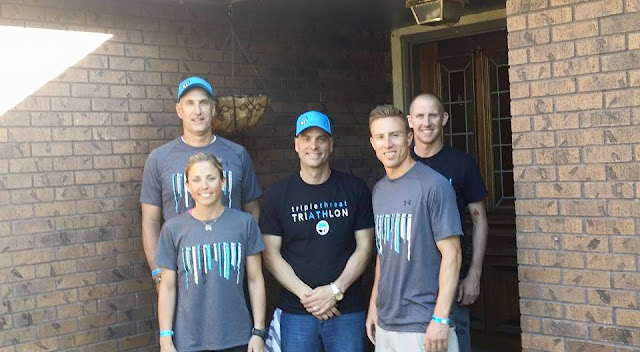 I went into this race extremely relaxed, in part due to the fun team vibe, but also because my expectations were so low. For one, I didn’t feel I had gotten in enough long rides/runs in training. But more than that, for the first time since running a marathon with IT band issues over a decade ago, I went to bed the night before the race not knowing if I’d be able to get the job done, period.


The week before the race was a rare mid-year vacation for myself and fam (parents, siblings and their spouses). One day we got into some water basketball at the hotel, which was surprisingly a blast. However, as with many activities, the intensity level ratcheted up with each passing game. What was initially a fun game became more competitive, yet still a good time. It became increasingly impossible to get anywhere near the hoop without getting completely mauled, and if there had been a ref of some kind, everyone would have fouled out almost immediately.

There’s often that moment in these situations where someone loses their cool and it goes from friendly to, well, less friendly. With all the blatant fouling that had been going on (in good fun), my brother’s whining about me accidentally scratching his arm on a shot struck me as ridiculous. Shortly thereafter we both dove for a ball, and since my left arm happened to already be around his neck, I figured I’d give him the business with a little brotherly headlock accompanied with a nice dunk under water. It was a dirty play, a flagrant foul for sure, but not intended to be overly malicious. My brother came up hot, but after a couple minutes we were fine. The group did however decide it was best to move on to other activities.


Despite no bad blood afterwards, as I texted my brother a couple days later, I definitely got the worst of the exchange in the form of bruised ribs. You know what they say about karma…

I went for a swim several days before Boise and could sense I might be in trouble. A 20 min little taper run 3 days out confirmed it, as I was doubling over in pain and grunting like an Eastern European female tennis player with every other stride. The day before the race I did a 10 minute test jog with similar results… I was in for a world of hurt.

Race day came, and we took our time in the morning before eventually hopping one of the shuttle buses around 8:30 for this unique 10AM start. We were all really quick in transition and then it was the waiting game for our individual waves. I had bought an Ace elastic bandage to wrap around my chest in an effort to give a little support, and I tucked two of those hand warmer things skiiers often put in their gloves into the bandage to try to provide some extra warmth. It was worth a shot.

Once my wave was given the green light to enter the water, we had ~5 min until go time. Usually I like to warm up as much as possible, but after my first little breaststroke motion to get to the starting buoys I could tell it would only hurt, so I just lightly treaded water. The gun went off and I gritted my teeth with every pull. I soon realized that breathing to my right (I’m 50/50 in the pool but usually left on race day) was slightly less painful so I went to that for much of the way. It was pretty much a hard pull with the right arm followed by a “wet noodle” pull with my left, but it got the job done. As a positive of the slower swim, I felt great from an aerobic standpoint as I exited the water.

It was soon clear we were in for a windy day. The weatherman that morning had labeled it “breezy,” which I equated to an old high school math teacher of mine who claimed his notoriously long & difficult tests were “quizzes.” That said, I was just stoked to be out of the water, and I tried to stay aero and keep a positive mindset. There were a few changes to the course from last year, none of which favored the athletes… hilly and on not great roads, with multiple turnarounds that completely broke your momentum. It was a challenging day & course, but it was fun spotting a few teammates along the way. I used Hammer Perpetuem as my one and only source of calories on the ride, rode within myself and felt good. That said, several times I wondered how I would manage running 13.1 miles when 13.1 minutes was so tough in the days leading up to the race.

My little moment of truth arrived as I went through T2 and started an apprehensive jog. I could definitely feel the pain, but it felt different that my short runs the days before. I wasn’t doubling over in pain… it felt doable, and I was ecstatic. The swim and bike mixed with some race day adrenaline must have loosened things up a bit. Still, I popped a few ibuprofen at the start of the run for good measure. I ran with a Hammer flask and went to it early for some hits of Montana Huckleberry gel. I always break the run of a 70.3 into thirds, running the first 4 miles at one full notch slower than “comfortable.” So extra comfortable I guess. If I’d have put in more volume I might have been more aggressive, but from my experience it’s so easy to start out too hard. A pace that feels easy in the beginning will eventually get tough to maintain, and the goal is to be running miles 8-13 (not just running, but hopefully putting the screws down if possible).

I felt great for that first third, then set out to run 5-8 with a little more purpose. However, there’s such a fine line in long-course racing between feeling great and feeling like you ran into a brick wall. I regularly took more hits of gel, along with water, and dumped ice in my hat at multiple aid stations. I kept my same pace as the first third, but it was far less easy.

The final third is gut check time, and my pace started to fade ~20 sec. After the race Joleen mentioned that she had a very upbeat and positive tune in her head to keep her moving. I can’t remember what it was exactly, but I envision something like this:

On the other hand, I needed to channel something more like this to get me thru miles 9-13:

In the closing miles I popped a couple Endurolytes to ward off what felt like a potential cramp in my calf. At one of the final aid stations I double fisted some cups of water and threw them in my face, which actually seemed to help more than drinking it. Finally the homestretch, which is always a great feeling. As always, the support and volunteers were amazing. The city of Boise puts on a great race!

It was so great to hang out as a team, which made this a very memorable race. David Wild (Hawaii) was incredible, placed 20th overall in 4:34 and qualifying for 70.3 Worlds in Austria. He’ll be joined by David Fernandez (Florida) who qualified last month at Chattanooga 70.3. Joleen was also amazing, placing 6th in her AG in 5:25. She earned a qualifying spot for Worlds as well but ultimately decided to pass on the trip this year. 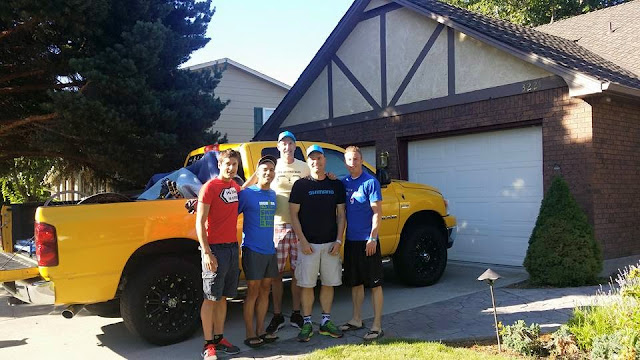