In honor of today being "Selection Sunday" for the NCAA college basketball tournament, I'm proud to announce the inaugural Triple Threat Triathlon Ironman Challenge! You can download and print your Ironman bracket from the homepage of TripleThreatTriathlon.com.

Instructions: The concept is simple: given the option of two races, which would you choose? Assume you just won the lottery and money is no object. Also assume zero travel time... a snap of the fingers and you're checking in at the race site.

Methodology: I began by taking the entire list of Ironman and Ironman 70.3 races in the world (80+) as listed on trimapper.com. I know there are lots of great non-Ironman brand races out there, but for simplification I went with Ironman only. Just like the NCAA tournament, not every team made it in... I had to make some painful cuts, whittling the field down to 64. I also excluded the two races that require qualification (Ironman World Champs in Kona and 70.3 Champs in Vegas) in order to level the playing field. Otherwise almost everyone would take Kona to "win it all." 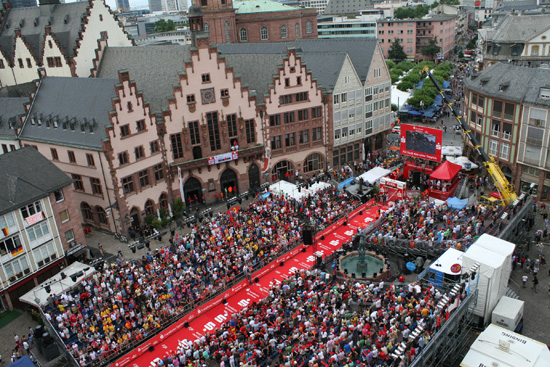 For the bracket, I arranged the races in alphabetical order according to the host city, which I got from the trimapper list. This made it a little more interesting than seeding, creating some tough match-ups in the early rounds rather than the higher seed automatically moving on.

For my own bracket, I tried to pick the race I'd prefer doing based mainly on my gut instinct. The more "exotic" locations didn't always advance, and on the flip side some races in more "boring" locations did due to sentimental reasons. For example, I grew up in Indiana, so Muncie 70.3 made the field of 64, even though it's hardly a tourist hot spot. Similar stories with Steelhead (Michigan) and Boise (Idaho), being races I've done in the past and have good memories from. I obviously don't have tons of insight into every race... some that didn't even make the field of 64 may be among the best. Pardon my ignorance if your favorite race didn't make it in. 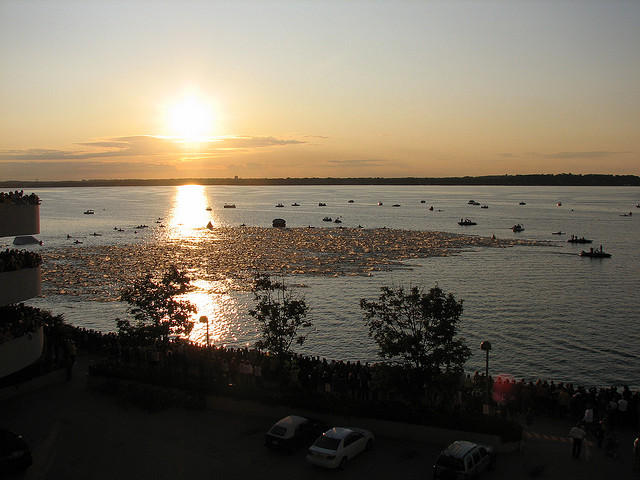 In summary, there are no right or wrong answers... I enjoyed filling out the bracket and hope you will too!

Without further ado, here's my bracket: 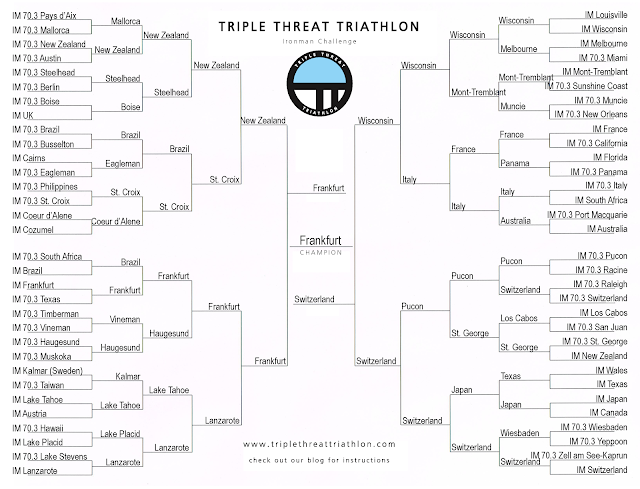 Once again, you can download and print your own Ironman bracket from TripleThreatTriathlon.com.
You might have to do a little research to figure out what countries some of the races are in. The above mentioned trimapper.com or Ironman's site are good references if you need them.
I'm interested to hear your feedback... with the bracket laid out how it is, what was the toughest match-up for you? Who made your Final 4, and who do you have winning it all?
Posted by Utah Tri Buzz at 12:00 AM