This was my second go at the Patriot Half with last year’s race being my first ever 70.3. I learned a lot and suffered a lot at last year’s race and was looking to make a killer improvement from last year’s time. The race is set in East Freetown, Massachusetts, set up all around Cathedral Camp, and is honestly the perfect spot for a triathlon! I got to the race roughly at 5:30 AM which gave me plenty of time to set up transition, hit up the bathroom and get a nice warm up swim in. I headed for the start line at the water just in time to see the elites take off for the swim at 7:00 AM. 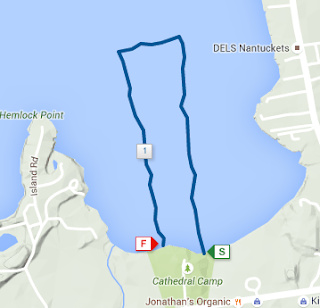 The swim for this race is a time trial start where age groupers enter the water 3 at a time every 10 seconds. Although it sounds like it is a long drawn out process, the race management company Sun Multisport does it very efficiently and all 800 (give or take) racers are in the water within 20-25 minutes.

I entered the water at roughly 7:08 AM and my strategy for the 1.2 mile swim was to just stay consistent. By far the swim is my weakest discipline but I know I have come a long way since the first time I did a triathlon two years ago. My time last year was 43 minutes and I just wanted to finish faster than last year’s time. I felt fast throughout the swim in my Roka Elite wetsuit and had no trouble at all sighting with the Roka F2’s I had on. I exited the water and checked the clock and was happy to see 36 minutes. Reviewing my swim file afterward I think I can shave a minute or two off if I just swim a little straighter on the half mile swim back to shore. 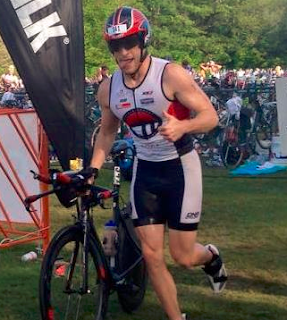 I got into T1 and stripped my wetsuit off and was ready to go for the bike. I have been putting up some big blocks of training on the bike this winter and spring and really wanted to do some damage on this rolling bike course. My target wattage was to start out at 225 and slowly build to 230 by the end of the two lap 56 mile course.

The 1st 10 miles felt great. My legs we feeling really responsive and I was passing a lot of the fish that got out of the water before me. At mile 11 or 12 however I had my first little snag (which really was a big snag). We went over railroad tracks and the bump somehow dislodged the shear pin that was holding my hydration system. I was able to fix the problem thanks to the extra Velcro strap I added to the system before the race, but soon discovered the 400 calories of solid food I brought along for the ride had fallen off when the shear pin came loose. All I was left with was 400 calories of Perpetuem from Hammer Nutrition. In training I found my best nutrition plan was to sip Perpetuem every 15 minutes and every 45 minutes have some solid food. 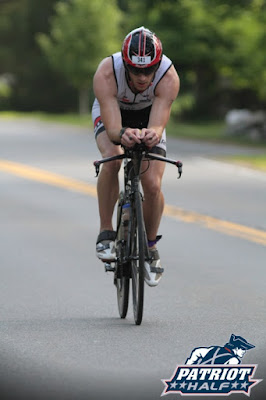 It was time to re-evaluate. I knew 400 calories would not be enough at my current wattage so I backed my wattage down to 215 and hoped for the best. I decided I would have to properly manage the 400 calories of Perpetuem for the remainder of the bike and try to take in as many calories as possible in the 1st few miles of the run.


I continued this method for the remaining 45 miles and came into T2 with a 2:35 bike split. I was happy with this split but knew the run was probably going to be tough as I was feeling some rumbling in my stomach. I was probably not going to hit my sub 5 hr goal but knew I was still 2nd in my AG so maybe I could hold on during the run and still get a podium spot.

I had a pretty quick transition and made sure to grab a few extra gels to try and make up the 400 calorie deficit I had with my nutrient plan. My running has been great lately and I was really hoping for a 1:35 run split, but after the snafu with my nutrition I had no clue what I was capable of. 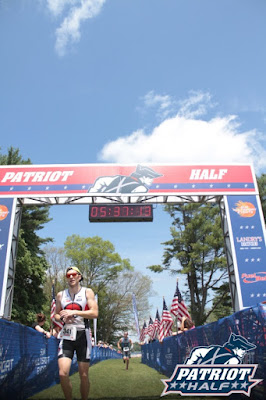 Starting out in the first mile my legs felt great and were very responsive. My stomach was still grumbling so I started taking in my first gel. All I was hoping was that it was not too late. By the time I hit the first aid station my grumbling stomach felt like a washing machine on the spin cycle. I knew this was not going to be pretty. I made sure to take in some water and some flat coke and hoped it would help settle my stomach. By mile 2 all hell broke loose, both my legs started cramping and I was forced to start a walk/run strategy. I continued this for the remainder of the half marathon.

I finished the run in 2:10, the slowest I have ever been on a 70.3 run. My final time was 5:29, not the sub 5 hr I was looking for, but I was still able to shave 20 min off my time from last year. I ended up 5th in my AG, which isn’t on the podium but still not bad considering what I went through on the run. I learned a lot from this race about mental toughness and how to adapt on the fly. I have a new burst of motivation and am looking to take this motivation into my next 70.3 in August. I want to give a special thanks to my Triple Threat Triathlon teammates for giving me tons of advice during my training, our TTT sponsors for their awesome support and especially my girlfriend Katie and my parents for coming out and supporting me for this race! As the great Bill Belichick would say, “We’re on to Timberman!”