Fish out of Water

I turned on the radio while driving the other day and heard Dan Patrick interviewing Michael Phelps. Normally I find Patrick pompous and annoying, but since Phelps was involved I resisted the urge to change the station. It was a lot of fun watching Phelps dominate the last few Olympics. I loved his fiery competitive streak and the way he would walk in with his headphones and game face on, ready to rock. From things I’ve seen and heard, he definitely has that Michael Jordan characteristic of thriving off of every real and perceived slight and using it for fuel. With guys like that you get the sense that if people would just keep their mouths shut they’d have a better chance of winning. Talking trash to Jordan during his playing days was suicide. As the owner of the Charlotte Bobcats (a really bad team btw) MJ to this day has members of his staff send him articles saying what a terrible GM he is. Although it hasn’t really helped to turn around the Bobcats yet, that’s the type of stuff he thrives on. Although only 27 years old, Phelps has lost the fire to grind out training sessions for four years until the next Olympics in Rio. He said in the interview that if he could just race and not have to train, then he would still compete, but he knows that’s not possible… as evidenced by the 20+ pounds (~10kg) he said he’s put on since London.

I can’t blame Phelps or other professional athletes when they decide to hang it up. If we’re going to blast guys like NFL quarterback Brett Favre for trying to hang on too long, then we can’t criticize athletes for going out on top, even when they theoretically have something left in the tank. An example from the triathlon world is Chrissie Wellington, who raced 13 Ironmans in her career and won all of them (including 4 World Championships), before announcing her retirement at age 35. After devoting everything to such a single focus, I can understand the desire to get involved with other things and do anything else. That said, since we always remember elite athletes at the peak of their powers, it’s strange to see them as anything less than that post-retirement.

It’s cool to me when former pro athletes either continue to be involved in their sport, or when they take on bold new challenges. Some sports lend themselves more to continuing to participate than others. I’ve heard Macca say that he’ll continue to do triathlons well after his pro days are over. On the other hand, I don’t see Favre playing in a local flag football league any time soon. As far as taking on new challenges goes, Phelps has been hitting the links of late. As a Steelers fan, I was stoked to hear that retired wide receiver Hines Ward is training for Ironman. Of course you knew his ride had to be black and gold, right? 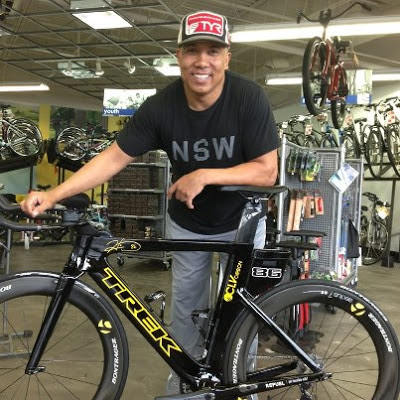