First year professional triathlete Moka “S-moka-n fast” Allen Best has been on a meteoric rise since doing her first triathlon less than three years ago.  Between swimming, biking, running, and raising her four children, Moka gives new meaning to the phrase "working mother."  She was gracious enough to chat with me for a few minutes on her unique story and what her plans are for the coming season.

What’s your athletic background, and how did you get into triathlon?

“I grew up in Maryland.  I played field hockey, volleyball, and was a… embarrassing to say… cheerleader in high school.  I started running at age 17 or 18, and in the beginning I couldn’t run a mile without stopping.  A friend introduced me to mountain biking, and I borrowed my brother’s Huffy for rides.  Eventually I got my own bike.  I moved to California, and my now former husband convinced me to do San Diego's SuperFrog in 2010 (editor’s note, this is a half Ironman distance race as her first tri!).  I did the race four months after having my daughter Stella.  I caught the triathlon bug right away, and 2012 was my 3rd season in the sport." How would you sum up your 2012 season?  What was the highlight/lowlight?

“The highlight was definitely qualifying for my pro card on my last attempt of the year in New York.  I actually broke my big toe in T2, so the run was especially painful!  The low point was having two gnarly bike crashes back-to-back shortly before the ITU Championships in Spain, where I had hoped to qualify for my pro card.  There were a lot of challenges in my quest to become professional:  bike crashes, a flat tire in one race, and a bogus drafting penalty in another to name a few."

What’s on your schedule for 2013 and what are your goals?

“I’m focusing entirely on Olympic distance races.  I’ll do several of the Lifetime Series races: Nautica South Beach (Miami), CapTex (Austin), Chicago, and Dallas.  I’ll also do some of the Ironman 5i50 series: St. Anthony's (Florida), Kansas, and hopefully the championships at Hy-Vee (Iowa) if I can qualify.  I'll also do the New York City triathlon.  My goal is to podium (top 3) before the end of year.  I know there’s going to be a steep learning curve though.”

"So many triathletes have a story of something they’ve overcome or are working to overcome in their life.  I've had my share of challenges as well, one of which being a history of an eating disorder.  Triathlon has helped me change my focus from being “thin” to being healthy and strong. One of my main motivations is to inspire women who have struggled with similar issues as well as victims of abuse, showing that you can be strong and overcome.  I do this by simply being open and talking about things via social media, my blog, website, etc.  I also have recently had some great opportunities to speak in public, such as at women's shelters and high school graduations."

“Ironman St. George in 2011 is my favorite, but also the hardest I’ve ever done.  I got the stomach flu two days before the race… I was so sick, and finished with only 10 minutes to spare.  Initially I was really disappointed, but looking back I’m most proud of that race because I didn’t give up.”

Do you feel added pressure now that you have your pro card, or was the pressure in getting to where you are?

“I definitely feel pressure.  I’m not concerned with placing, but I don’t want to disappoint all the people who believe in me and are cheering me on.”


Rumor has it several sponsors have been lining up for a piece of you.  Can you elaborate?

"(Laughing) I do have some really exciting partnerships with Fezzari bikes, Reynolds wheels, Rudy Project (2nd season with them), and Canyon Bicycles as my local bike shop.  I have some shoe, clothing, and wetsuit sponsorships in the works.” 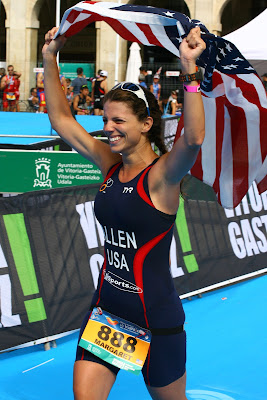 What’s your biggest strength and weakness?

“This is an easy one.  My strength is the bike, weakness is the run.  My body just doesn’t seem to like running.”

What advice do you have for other mothers in the sport?

“I would say don’t listen to the people who say you can’t do both.  I love my kids so much, and they're proud of what I'm doing.  (Laughing) My 4-year old took me to show and tell at her preschool!  My two oldest kids will often ride their bikes while I run.  We talk a lot during these runs, and it’s really quality time.  My oldest loves running 5ks, and I'm happy to be a good example of being active."

How about for those new to the sport?

“Triathlon doesn’t necessarily get ‘easier’, but you get stronger as you go.  Don’t give up!  Find a good support group.  They can help you overcome some of the unknowns you have when you’re starting out.”

You can follow Moka at her very cool website www.mokaallen.com and on Facebook.  She also has a few spots available for coaching, and can be reached at moka@racepacetraining.com.
Posted by Utah Tri Buzz at 9:45 AM