After finishing 2nd to last at her first ever triathlon, the odds in Vegas of Elaina Mertens (Iowa) qualifying for Kona within a decade were not good. In fact, if you had put some money down that day, you'd currently be enjoying retirement on the Caribbean island of your choosing. Elaina has clearly improved just a little bit, and we're stoked to have her on board as a new member of the Triple Threat Triathlon team!

What's your background and how did you get into triathlon?


Running was my first love, I first went out for cross country in high school to get in shape for basketball, and ended up loving it. I went on to run at Coe College, where I studied strength and conditioning. I did my first triathlon about 9 years ago when I was in college. There was a new triathlon close to my hometown, and my dad bet me I couldn’t do it. I love a challenge, so I gave it a shot. Coming from a running background, I was most nervous about the swim. I rode my Trek mountain bike for that race, and finished 2nd to last!! Somehow amidst a disastrous start in this sport, I loved the challenge. Needless to say, I’ve made several equipment upgrades, and learned a lot in the meantime!

How would you summarize your 2015 season, and what was the highlight and lowlight (if any)?

I would say my highlight and lowlight might have occurred on the same day! My 2015 training cycle was certainly the best I've had yet! Bike rides and long runs were consistently faster than what I did last year, and I felt the strongest I've felt heading into Wisconsin! I did several shorter races en route to IM Wisconsin, and competed very well for the season leading up.

Qualifying for 2016 Kona World Championships was without a doubt the highlight of my triathlon career (2nd in my age group at Ironman Wisconsin). This day was also probably my lowlight- complications on the bike course had me feeling rather defeated during the day. 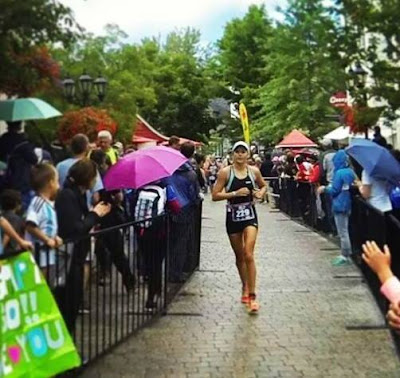 Give us a quick recap of IMWI... did you go into it with Kona as the goal or was that an unexpected result? Did you know where you stood in your AG throughout the day?

I did not have the direct goal of qualifying for Kona. I thought it was a possibility, but I didn't think it was likely. The tricky thing about qualifying is that there are a few key factors that are out of your control- mainly who shows up in your age group, and how many slots are allotted per age group. My mentality going in was just to do the best that I could, and if that was good enough for Kona, then awesome! And if not, maybe some other year.

Qualifying was definitely a lifelong goal, I never imagined I'd accomplish in my second ironman! Going through the race step by step, I felt more confident than I had the year previous, and felt that my training was substantially better than the previous year, particularly for biking and running. I figured my swim would be similar. I got out of the water in 1:15, about 20 seconds faster than my ironman in 2014. I felt great about that! My goal for the bike was a 19.4 mph average (5:46-5:48). This would have put me a few minutes faster than I had completed the bike portion of my ironman in 2014 (5:51).

Unfortunately, I had a few unexpected stops during the bike portion of my race, in hopes of fixing a broken shifter. Somewhere around mile 70 my shifter came loose, and began defaulting to the highest gear. I stopped at the first group of spectators I saw, and a gentlemen gave me a screw driver from his truck so I could try to tighten the shifter. It seemed to work, but after I began riding, I found out that the shifter was unaligned, and I also could not use my lowest three gears. I spent the next 40ish miles shifting in and out of gears at the mercy of my bike, and grinding up all the hills. Almost in tears heading into T2, I have never been more glad to ditch the bike! My bike time was 5:58, a little over 10 minutes slower than my goal (the three stops actually cost me right around 10 minutes), I was honestly just happy I made it into the transition.

Heading out onto the run, I knew there was no way I would hit my goal time, and I was for sure I was out of the running for an age group award. I had no idea what place I was actually in. The run went relatively well (3:41), but my legs felt a little more burnt out than I had hoped, probably from the mashing up hills. I stopped worrying about pace, and enjoyed the course.

Upon finishing, my fiancé met me at the finishers chute. I asked him if I even got top 10 in my age group. He laughed at me, and told me I was 2nd. I knew 2nd place would maybe be good enough for Kona, but I didn't get a whole lot of sleep that night worrying whether it was or wasn’t! I was ecstatic and astonished to get a slot for Kona! I still cannot believe its true! 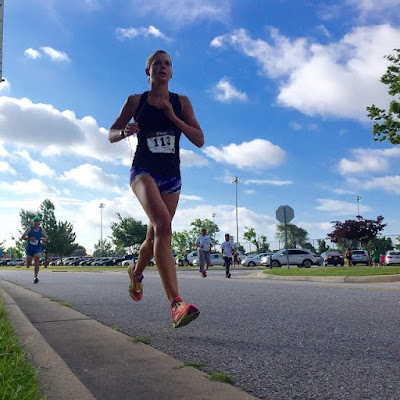 Was that your first IM? If not, how did it compare to others you've done?

IM Wisconsin was my second. My first was 2014, IM Mont Tremblant, where I did a 10:55. Both races were absolutely amazing in their own respective ways. Mont Tremblant was amazing because I entered the race with no expectations for myself, and no idea what I was getting myself into. Just making it to the finish line was my only real hope! The course was absolutely beautiful, and I quickly caught the ironman bug! Wisconsin was a different type of beautiful. I live a little over an hour away from Madison, so I had lots of friends, family, and even some of my students came up to support me. It was amazing how quickly the time went by when they were literally all over the course! Heading into Wisconsin, I was planning on taking a year or two off from the long course and focusing on some shorter races. I suppose that can wait another year :)

You closed out IMWI with a 3:41 marathon, yet I remember you telling me you were "disappointed" with that run! On a perfect day what do you think you're capable of?

I ran a 3:37 at Ironman Mont Tremblant the previous year, and I felt that my run training leading up to Wisconsin was significantly better. My long runs were around 7:50-8:00/mile, whereas the previous year they were 8:30-8:40/mile. I also did more tempo work this year, and had been running slightly faster that 2014 in the months leading up to Wisconsin. Both Mont Tremblant and Wisconsin are similar in amount of climb in both the bike and run, so heading into Wisconsin, I was hoping for 3:35-ish.

Clearly your "A" race for 2016 will be Kona. At this point are there other races on the schedule as well? Will you do anything different in training for Kona vs. say, Wisconsin?

2016 will without a doubt be an interesting year. I clearly wasn't planning on qualifying for Kona!! So I'm getting married in March, and having a wedding reception in June, and going on a honeymoon in June-July! So things will be pretty different from Wisconsin training. I am planning on doing a 70.3 (probably Racine, or the newly released 70.3 Ohio), I will also do some smaller sprints, and Olympic Nationals in Omaha. Probably most importantly, I plan on enjoying Kona. My goal was to qualify, and while I want to compete well, I really want to enjoy the experience! 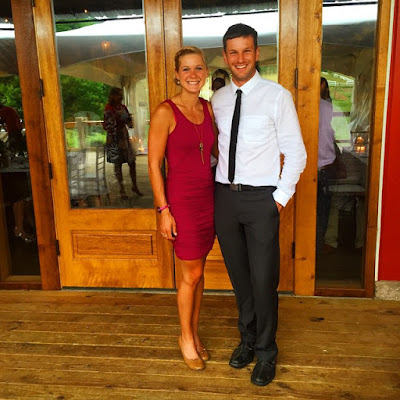 Many swimmers struggle to become great runners and vice versa. How has the process been for you as a former collegiate runner?

This is a process I still struggle with. Running is my first love, and I have a really hard time cutting back on runs and devoting time to the pool. I work out with our college cross country team, and coach track in the spring, so it's very easy for me to get plenty of running miles in and neglect the water.

I have made small improvements in my swimming over the years, but this has always been my biggest struggle. On the upside to this, if you come out of the water in last place, you can count on passing people for the rest of the race, which is super fun!

From the little I know, it sounds like you have a very interesting job... can you tell us a bit about it, and is there crossover value to your own training & racing?

I work in the Kinesiology department of a college, and I absolutely love what I do here. I teach Sports Nutrition, and Anatomy & Physiology. I also complete research related to sports performance- particularly endurance performance. I am currently working on a project involving the effect of compression socks on maximal performance and recovery. Next semester, I have a student who will be looking at caffeine dosage and performance. I love the research side of things because it allows me to be continually learning, and of course gives me insight on how I can improve as an endurance athlete. It's also great, because my students get to work hands on in the lab, and be involved in the whole research process from start to finish. I love seeing them grow in the process, and start to ask their own questions related to research. I also coach/ personal train a handful of individuals (around 10 right now). My ability to stay up on the trends of nutrition, and advancements in training allows me to share some unique insight with my clients! 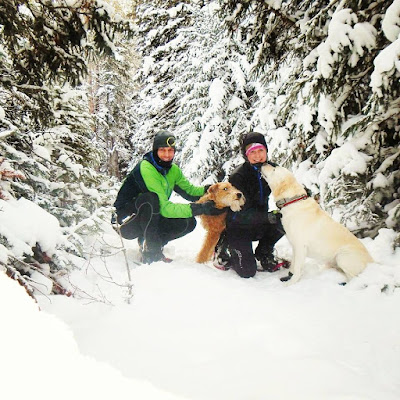 What's the triathlon scene like in Iowa, and what are the pros and cons of being a triathlete in your state?

The triathlon scene in Iowa is great. It seems like no matter where you go with this sport, you can meet some amazing people, and hear some inspiring stories. We have a pretty tight knit community of triathletes in our state, and I have really come to love the local camaraderie you get here.

My fiancé and I are big in the biking scene, and traveling. We are actually going on a Trek Travel for our Honeymoon- it’s a five day biking tour around Sonoma and Napa, including wine tastings at many wineries! On the weekends, we sometimes bike to different wineries or breweries around our area (prepping for the honeymoon). We ride fat bikes, or our tandem bike in the colder months, or just for fun. We also have two awesome dogs that love going to the trails. I guess both of those things still involve running and biking, so I don't think I do much other than that! Haha!

The majority of my students are athletes here at the college, and I really enjoy going to their athletic events as well!