A little housekeeping... below is David Fernandez' (Florida) video review of the Wing57, which I've added to the original written review. Enjoy!

Being successful on race day requires equal strength in both body and mind. Let’s face it, the DNA you’re born with contributes to the equation, but regardless of the hand you’re dealt, you can train your way to huge individual improvement. On top of that is the equipment you use on race day. For example, no matter how good Mirinda Carfrae’s DNA and training may be, she’s not winning Kona on the rusted out beach cruiser in your neighbor’s garage (now that I think about it, I'm not so sure... she still might run everyone down).

The mental side is huge as well. Just like any sport, some people show up having conceded the fight before it begins. Of course everyone is there for some element of “fun,” but some show up with that X Factor, which is often described by phrases such as Marshawn Lynch (below) “activating Beast Mode,” “a little fire in your belly,” “a chip on your shoulder,” “Playing Angry," etc, etc. Basically it’s a drive or an attitude of winning, whatever “winning” means to you. On the other hand, others are afraid to really push themselves and stay comfy in “Safety Mode.” A good performance requires a huge helping of mental toughness in order to, as Macca famously puts it, “shake hands with the pain.”

Some days it’s easier than others to have both body and mind clicking on race day. Sometimes that’s on the physical side, if your legs just aren’t there, for example, but other times it’s more mental. It’s an interesting phenomenon: Have you ever gone for a run really pissed off about something? Or maybe really stoked about something? Suddenly you have a gear, and a drive, that you didn’t have before. For some it’s the competition, or could be a certain someone you really want to beat! For others it’s more internal, even a “look fast, feel fast” phenomenon of rocking a new race kit, new gear, etc. All of these benefits are obviously psychological, but they can sometimes play a big role in your performance.

After getting a chance to test out the Rudy Project Wing57, in my opinion the benefits are huge on both of these levels: physical as well as psychological.

On the physical side, the Wing57 has been referred to as an “absolute speed monster,” and was designed with the aid of legendary aerodynamics guru John Cobb. It underwent extensive wind tunnel testing, and it also comes with a magnetic, removable extension that can be added to the tail depending on your riding style (flat or arched back), to help break apart vortices which create a low pressure zone and drag. 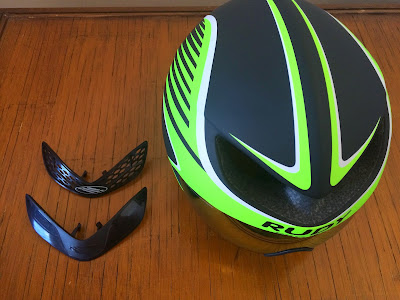 In addition to its aero benefits, the ventilation is far superior to other brands I’ve worn. This is a big reason why Rudy Project has won the prestigious Kona Count 4 years in a row. Especially in hot conditions, this ventilation is crucial. That said, the Wing57 comes with vent covers so you can customize the helmet depending on race distance, conditions, etc. It comfortably fits a wide range of athletes, weighs in at a mere 300g, and features a one-touch adjustable dial in back, which makes transitions a breeze.

On the mental side, I’ve got to say there’s something about strapping this helmet on that immediately activates the aforementioned Beast Mode. Andy Potts touched on this power in our interview when he said “I feel like a fighter pilot when I wear it.” It’s easier to feel and be fast when you look fast! The visor is badass… I thought it might take some getting used to, but it really didn’t. You feel legit, feel fast, and it looks intimidating as hell.

Speaking of Andy Potts – He just won IRONMAN Coeur d’Alene wearing the Wing57 in one of Rudy’s 6 new limited edition colors. Check out how that wicked new Red & Black matches his kit perfectly:

There are reasons why some NFL players such as Marshawn Lynch (Beast Mode himself), the retired great LaDainian Tomlinson and others play with a visor, and I’d argue in many cases they are more psychological than physical. They strap that thing on and it’s go time… they look tough, intimidating, and it transforms them to another level.

In summary, like all sports, succeeding in triathlon is both physical and mental. I would encourage you to put the Wing57 to the test and find that next level for yourself!

As previously mentioned, Rudy just released 6 new limited edition colors of the Wing57, including the slick black & red that Andy Potts is wearing in the image above. All-in-all, they now have 10 styles in stock, and I'm told they will be releasing a further line of 3 "custom" colors in August, which have been made specially for North America.

To see all the new Rudy Project Wing57 colors, head over to www.e-rudy.com

Peeling Back the Onion: A Rudy Project Investigative Report 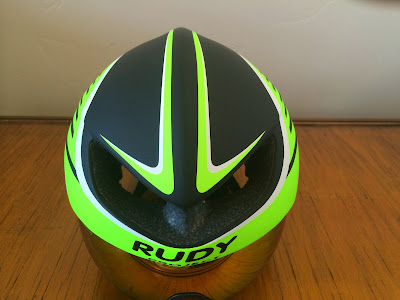 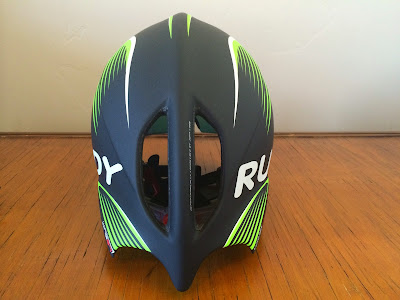