That Didn't Go As Planned...

Amy Fletcher went through a lot this season... while many triathletes may lament getting knocked around on a swim or maybe a flat tire, she had legitimate things to complain about. That said, her attitude and resiliency has been nothing short of admirable. Being the week of Thanksgiving, sharing her story comes at a perfect time.

So, after Ironman Chattanooga in September 2014, I signed up for IM Texas in May 2015. IM Louisville had been moved to October thus rendering it WAY too cold for me. IMTX is historically hot, so that was the plan. Of course, the majority of the training was inside (because I live in Indiana), but I think the quality of indoor training is often much better than outside anyway. I was pleased with my training and was eager to get outside for some rides as soon as it was warm enough. Easter Sunday, 5 April, came along and it was finally warm enough for a long ride outside. Blue and I headed out for our first 100 mile ride. I rode 22 miles and stopped back at the car to refill bottles. I felt really bad the entire time… sluggish and heavy and my abdomen was crampy, maybe even borderline painful. I thought maybe it was just the wind or something I ate, so I refilled and headed south for the remaining 80 miles. 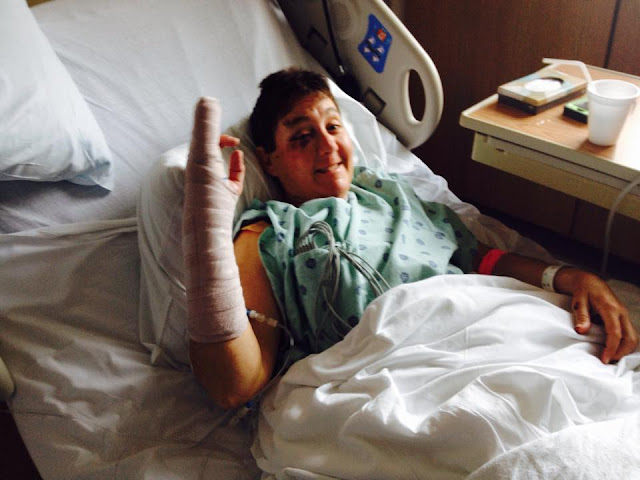 I continued 25 miles south still feeling bad. I never felt “right”, but at times, I felt better than others…the discomfort came in waves. At the Economy Trailhead, I decided I felt too badly to continue and turned around for the 25 miles back to the car. As bad as I felt then was actually the best I was going to feel for the next three weeks, but I did not know that. As I struggled to get home, it got later into the afternoon and it was a beautiful Easter afternoon and I started seeing people out on the greenway. I was feeling even worse and was getting a little panicked that something was wrong with me. I passed a couple of friends, who would have helped me, but I was scared that if I stopped moving, I might not be able to start riding again. So I kept going…slowly, but still moving.

I made it home. I could not eat all evening and once in bed, the pain increased and Mr. tried to get me to go to the Emergency Room. Since the pain would let up every once in a while, I didn’t want to go. I didn’t want to have to tell an ER Doc, “My belly hurts …well, not right now, but sometimes.” In hindsight, I absolutely should have let him take me, but I might be a wee bit stubborn. 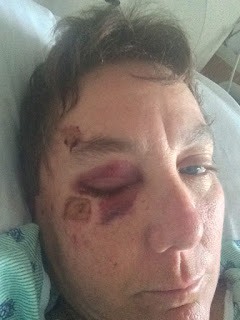 The next day of school was the start of a new grading period and I had all new students. Their class assignments and materials are all online, but it takes them some time to get logged in and figure out how to access their assignments. This would be the case on Tuesday also, because I teach every other day at two schools. I made it through both days, but coworkers considered sending me, against my will, to the ER. Once I had taught one day at each school, I could upload assignments and instructions from home if needed. And it WAS needed.

I got in to see Doc and was diagnosed with “Gall Bladder Sludge” (That can’t be good) and was scheduled for removal the next day. No wonder I didn’t feel good….SLUDGE? Before the surgery, Mr and I explained that I had an Ironman in 5 weeks. He didn’t actually laugh out loud, but he worked really hard to hold it in.

Recovery was slow and painful and I was out of school and basically relegated to the couch for several weeks. Obviously, IMTX was out of the question. 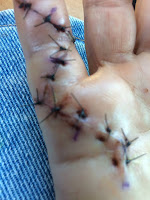 Once cleared to start training again, Blue and I headed out to the greenway. I ran into friends Beth and Janice and we were riding back towards home together. It felt great to be back at it – this was my second ride since being cleared to ride again. We crossed the intersection of 700 N ….and that’s it….the lights went out…I don’t remember anything else. Beth and Janice said that for some reason, Blue and I slipped off the side of the greenway into the gravel and I tried to get back onto the pavement, but wiped out and Blue flipped across the greenway and actually hit Beth. They say I was awake and talking and told them the passcode on my phone (they obviously called 911 then called Mr). I don’t remember anything until…I don’t really know when I “woke up” but it was a day or two later. Side note…no one stopped my Garmin, so I have the video of the ride, the stationary time, then the ambulance ride reaching 86 mph to the hospital).

I ended up having multiple CT scans (which, apparently, I do not like…after the first one, they decided to just sedate me rather than fight me over it…again, I don’t remember it). I had a Level Two head injury (Doc said that my helmet may have saved my life!), broken eye socket, broken arch (cheek bone) and broken finger. As a result, I had three surgeries and 3 additional procedures requiring anesthesia and eight weeks of occupational therapy to get my finger moving.

I am back to training now. I am slower. But I am training and I am happy. I am working on strength training as well as swim, bike, run. I am signed up for IMCHOO 2016 in September and am very, VERY thankful to be able to train again. During the recovery of both the gall bladder then the crash, Mr was amazing. He was always confident that “we” would get through this and I was going to be OK. He was always positive and reassuring. Even once when we were grocery shopping and I was falling behind because I couldn’t walk that fast, he came back for me and told me I would heal and would get stronger. I thank God for Mr.

I am writing this today, 23 November, because it is the week of Thanksgiving and I am thankful, but also because my crash, was exactly six months ago. Mr. was right. I swam, biked, and ran today. I am blessed.