After getting in a nice sprint tri this morning, I'm actually leaving the country for a few days later today. Since I'm not sure if I'll be able to post during the week, I figured I'd tee up a very popular 2-part series that originally posted in 2013. In terms of an update, I will most likely be going under the razor for Boise 70.3, our upcoming team race... the peer pressure will be too much to bear.


I’m not a hairy guy. I’m just not. As with most things, this comes with pros and cons. Some women like the "sasquatch" look, but thankfully my wife is not one of them. That’s a pro. On the other hand, girls used to comment that my arms were smoother than theirs, and past attempts at growing facial hair were met with ridicule and shame.
﻿
While on the subject, I did a little research and learned that the modern practice of shaving among women began in the early 1900’s, at least in part due to a huge marketing campaign to increase razor sales. While it’s rare to come across a hairy female these days, as I was reminded at my last race, such is also the case regarding a species known as the male triathlete. Although I don’t have statistical proof, based on my observations it appears that more and more men are taking the plunge and shaving their legs. The trend is definitely up. Personally I’ve never had the desire, despite being more in the minority with each passing year. Maybe I need to do some more research, because I’ve never really understood it. I mean, how many milliseconds can it really save you?﻿﻿

Outside of triathlon, swimming, and a few other sports, shaving your legs just isn’t cool for guys. At least it didn’t used to be. In fact, despite its growth in popularity, many would argue that such an action requires a revocation of one’s “Man Card.” As a case study, I’m reminded of the following scene from Arrested Development:

Maeby (touching George Michael’s leg): “your legs are seriously smoother than mine... and I just shaved mine!”


George Michael Bluth (after an awkward pause): “so I’m thinkin’ bout getting a motorcycle.”
When accused of having smooth, feminine legs, George Michael feels the need to defend his manhood by countering in a “manly” way. 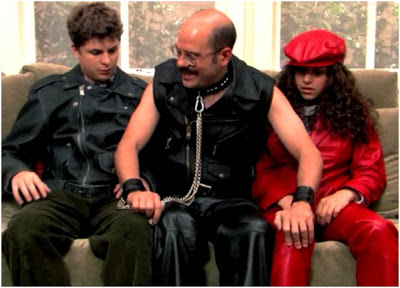 So I ask you, where is the line of acceptance drawn??
To be completely truthful, I have partially tested the smooth skin waters. Last year while out for an average run at an average pace, my right calf muscle realized that Ironman training had only begun and decided it couldn't take it anymore. For those of you with children, it's kind of like when your oldest child makes the devastating discovery that baby #2 is there to stay and freaks out on you. “You mean there’s no end to this madness?!?” To make a long story short, my run training was severely hampered for the rest of my training, and I took a friend’s recommendation to try KT tape the day before the race. This required shaving part of my leg in order to apply the tape, but I stopped short of going “all the way.” So I ask you… has my Man Card been snipped, or was that simply the nudge I need to shear these babies for my next race??