My friend Mark picked me up from the Houston airport and we stayed one night in Houston. We had a great carbo loading dinner- chicken parm at Collina’s Italian Cafe. Delicious.

In the morning we headed up to The Woodlands to scope out the area and figure out a race day plan. We attended the Athlete Banquet with Mark's brother Pat and sat at the same table as Sister Madonna Buder, the 84 year-old nun who holds the current world record as the oldest person to ever finish an Ironman. The meal was fantastic and every year the inspirational video Ironman creates for this event makes me cry; so emotional.

I met Triple Threat teammate Amy Fletcher, who had planned to race but her gall bladder had other plans. However, she came down to Texas from Indiana to cheer on friends who were racing.

I also met teammate Gina Shand (Virginia) at Gear Bag Drop Off where she was volunteering.

She brought a friend with her, a friend who enjoys her passion for racing triathlons all over the place. Everyone needs a friend like that. They were so excited to be volunteering at the race. Gina was also psyched to be able to volunteer again, the next day as a finisher catcher. What an amazing person!

Mark, Pat and I attended the Athlete Briefing and learned that the water was too warm for wetsuits.

Athletes could wear wetsuits but they would be last to enter the water and wouldn’t be considered for a Kona spot. This forced me to change my race clothing considerably. My TTT top had too much drag to swim in it but it was perfect under a wetsuit. I decided to wear my swim suit on race day and completely change into different clothes in transition. It made me nervous since I’ve never changed like that before nor had I trained or raced in open water without a wetsuit. But sometimes you just have to adapt. So I did.

We drove to the park for a practice swim. The water temperature was perfect at about 81 degrees. We swam for a half hour then had to bring our bikes to transition. I picked my bike up from TriBike Transport in Ironman Village. I decided to pay the extra $40 for the valet service after the race so I didn’t have to worry about bringing my bike back to the Village from transition; it was worth the additional cost. 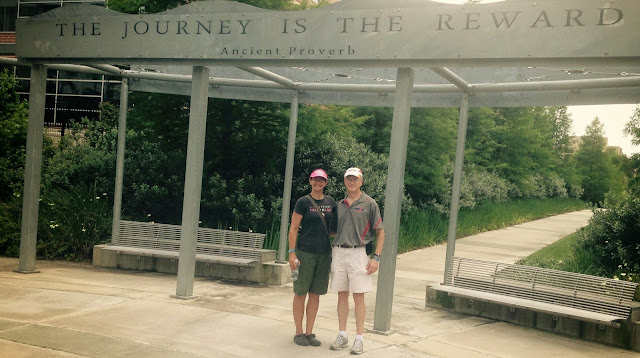 We relaxed before the swim start at the playground. Stretching, relaxing, taking pictures.

The age group race began at 6:40 am. Since it was a rolling start it was organized by swim finish times so we could line up and enter the water with similar abilities. Mark and I started at the 1:20 group. I like the “toughness” of the traditional Ironman mass start however, the rolling start was much less stressful. It was awesome swimming with triathletes at my level however I did get beat up a bit. But that is expected. Mark’s friends Amy and Paul told us no one here at The Woodlands swims in this water and I understand why. I couldn’t see a thing in the dark water but I got through it.

I felt good during the swim and felt somewhat fast despite no wetsuit. When a swimmer pulled me down, not on purpose, it was okay and I recovered. The main thing, I didn’t drown. It was my slowest 2.4 mile swim but I felt strong getting out of the water at the end.

The muddiest transition ever. The periods of rain leading up to race day made the ground in bike transition smelly and muddy. I should have carried my bike the entire time through transition but walked in through some grassier areas. I paid for it because the first 50 miles of the bike I heard a rubbing noise, I think caused by the mud. After drinking my 2 bottles of Perpetuem I alternated drinking water and Gatorade at every aid station keeping only one water bottle at a time on the bike.

At Mile 50 I was on strange pavement and my back tire felt like a possible flat. I stopped. Felt the tire pressure and it was FLAT! My first flat at an Ironman race. I changed the flat and had troubles with my CO2 so it took much longer. Then I didn’t fill it up right and had to stop a few times to get it right. Once I had full pressure I was so nervous I was going to flat again. I only brought one replacement tube.

I continued the rest of the race in survival mode. I rode as fast and safely as I could. I prayed and prayed. I repeated the mantra “I’m going to make it today, I’m going to make it today.” I wasn’t really sure I was going to make it but I kept saying it out loud. The bike course was beautiful. It was hot and I was glad for the five minute rain shower about Mile 70 to cool off. The rolling hills were tough and I tried to stand during many of them.

From mile 80 on I also repeated “almost there, almost there” a hundred times. I used Endurolytes despite never used them in training. I know, this is a no-no, but since I don’t have a sensitive stomach and I only had 4 of them, I swallowed one every half hour until I ran out. I actually felt a surge of energy about 5 minutes after taking each one. Not sure if it was related but I felt strong on the bike. I wore my Rudy Project Wingspan helmet and just loved it. So comfortable and light.

When I saw the Mile 100 sign I fist pumped and got some cheers. Happy Happy Happy. It was going to be a miracle if I made it back to transition. I knew that once I got there, I would finish Ironman even if I had a slow marathon. I dismounted at the transition. The awesome volunteer took my bike. I ran through the mud and into the changing tent. I made it. I am going to make it today. 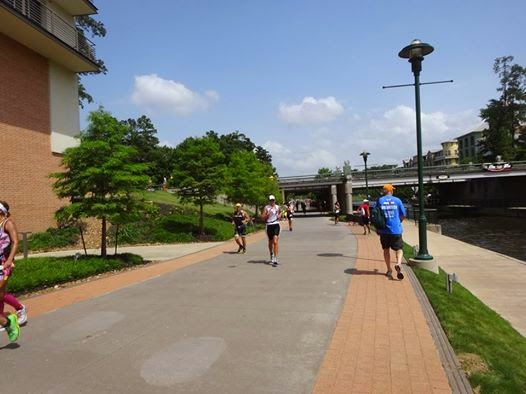 On the run the temperature felt like it was in the high 80s with only a few clouds in the sky. Where were those dark clouds we saw the last two days? The humidity and sun exposure made the first mile a walk/run. It was tough to stay running the entire time. The run was 3 grueling loops around the waterway. The spectators and locals who sat outside their home and cheered were amazing. The aid stations that lined the canal made me smile. Since my flat on the bike I vowed to smile at everyone and be the happiest triathlete on the course. I felt fast while running with a strong pace but the walking at aid stations slowed my overall time.

My run plan was to a) alternate Gel, Gatorade, Water at each aid station b) put ice down my top and down my tri shorts to cool my quads c) when walking count to 200 then run if feeling good – 500 if I feel terrible d) smile e) not drink and eat too much to prevent over hydration which happened at Ironman Wisconsin. It all pretty much worked.


My favorite spectator sign was the one with a woman holding up a sign that said “Single and Supportive”. Trying to pick up athletic men on race day. Smart. LOL

The Ironman Finish is the best thing about the race. The spectators cheered and I tried not to cry as I fist pumped over the finish line. I was caught by Gina, my Triple Threat Triathlon teammate. Down the line was Mark and his support crew cheering!

I’m proud of my effort. I feel thankful to be able to compete in this sport. So much can go wrong on the days leading up to the race and on the course. I am worse-case-scenario-girl in my head, but positive mantras, praying and being thankful got me to the end. 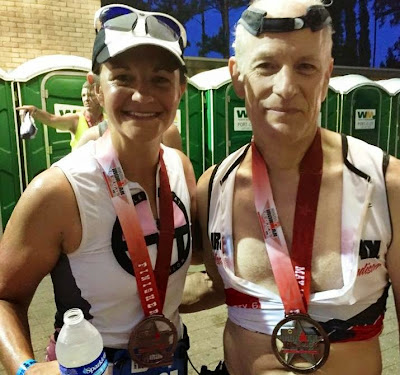 
I promised myself when I finished the bike course that I would be happy with my time no matter what. My time wasn’t a PR even though I arrived at the start with the best training to date. Now, it’s time for me to work on speed. This is not my last Ironman.

I am so happy that I got to race with my friend Mark. It was fun to ride with him for a bit at the beginning. I was thrilled to see him at the end with his friends who came to cheer us on.