Rookie of the Year: Paul Eicher

Before moving out of state, from 2007-2010 I competed in the Fleet Feet “Aquathon” series held in Madison, WI. These races were held Thursday evenings from May-Aug (5 total), and consisted of a 1k swim followed by a 5k run. At many of these events, I remember seeing a kid who appeared to be barely old enough to drive. He was often accompanied by his parents, and in hindsight they may have served as both support crew and means of transportation. He also stood out due to the fact that he always kicked my butt, along with virtually everyone else’s. I briefly met him at a few races and would congratulate him on a job well done.


Anyways, a couple months ago I was on slowtwitch, and happened to click on an article recapping the inaugural Ironman 70.3 Raleigh. Tri legend Greg Bennett won the race, and a 21-year old named Paul Eicher placed 2nd. “Wait a minute, I know that guy!” Indeed, it was the kid from the Aquathons, who I discovered was mid-way through his first year as a professional triathlete.

To say Paul’s first year as a pro has been impressive would be a major understatement. As mentioned he took 2nd at Ironman 70.3 Raleigh in what was only his second race as a professional. He followed that up with a solid result at Ironman 70.3 Racine (Wisconsin) in July and a 4th at Ironman 70.3 Steelhead (Michigan) two weeks ago. Impressive stuff, which led me to reach out to the kid himself to learn about his experiences as a pro.

What’s your background, and how did you get into triathlon?


Ever since I was a little kid I remember going out to cheer and volunteer at Ironman Wisconsin (the IMWI bike course passes through my home town of Cross Plains two times). I always looked up to those athletes, especially my then summer swim coach Justin Pernitz, who is an Ironman triathlete and now co-owner of Endurance House Middleton. I always wanted to do an Ironman someday, and I made it my goal to compete in Ironman Wisconsin my senior year of high school at the age of 18. Luckily I didn’t start with nothing; in high school I competed in cross country, swimming, and track, so the next logical thing was to throw in a bike and do the Ironman, right?

At what moment did you decide to step up to the next level, and what was the process of becoming pro? What was your family’s reaction to the news?


I don’t know if there was a single moment that I decided to make the jump… it was mostly just a continuous thought in the back of my mind. In college I changed my career path many times, and every time the root of the reason seemed to be that I just wanted to train and compete in triathlons. I qualified a few different times for my pro card but didn’t decide to take it until this year. It just seemed like the right time… I was ready for the change and excited to give it a fight. My family’s reaction was just like I would ever expect, supportive as ever! Yes they had a few reservations, but they would support me in anything I decided to do, even if it was under water basket weaving (editor’s note: I hear that’s a very lucrative field).


What motivates you as an athlete?


I don't think I can answer that question in one interview. Motivation for me comes from so many avenues in life: my own self drive, my family, friends, and the "big man upstairs" to name a few (Paul closes each blog post with his stamp of "GTGTG," short for Give the Glory to God). 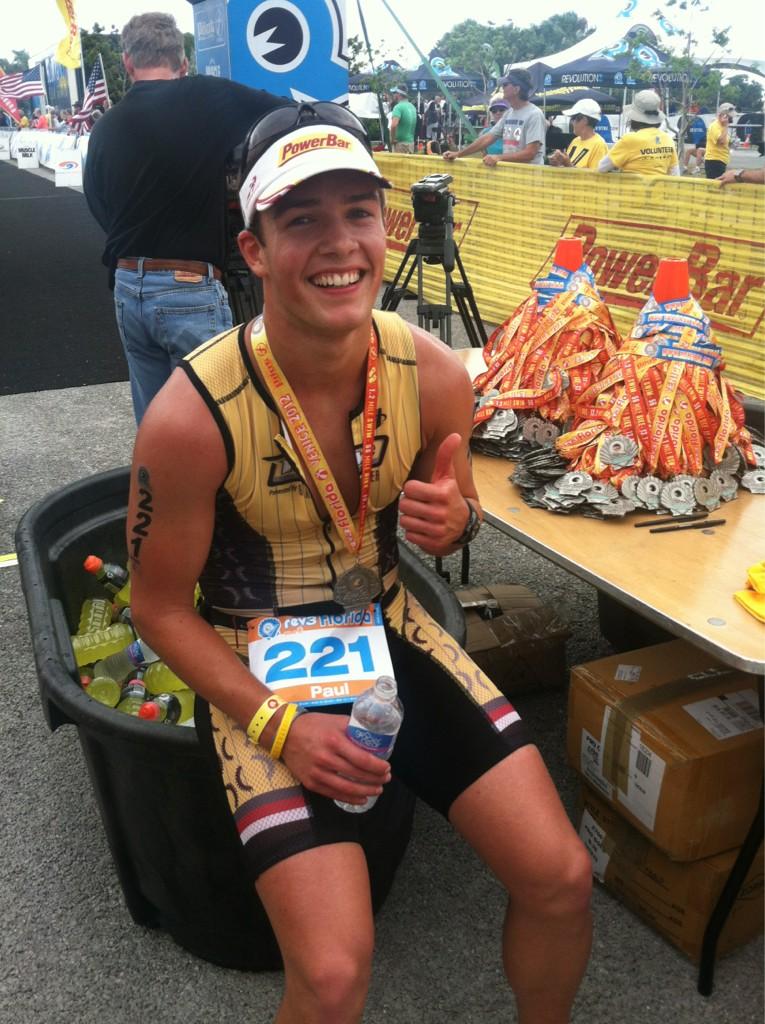 How were the nerves before your first race as a professional? In general, do you feel more pressure now that you’re racing for a pay check?

I rarely ever get too nervous before a race, but that first race (Ironman 70.3 Texas in March) was something else. I was ridiculously nervous. I have no clue why, other than it was a giant step that meant a lot to me. Since that first race my nerves, or lack thereof, have gone back to normal. I don't feel any pressure to race for a pay check because that is way in back of my mind, if there at all. I still have money coming in from other job avenues so that helps a lot also.

With a 2nd and 4th place already in the books, have you exceeded your expectations or is this how you envisioned your first year would go?


I was for sure hoping and working hard for the results I’ve gotten thus far, but definitely was not expecting any of it. Top 5 finishes in 2 of my 4 Ironman 70.3 starts sure does exceed my expectations. This year’s focus was not on racing but simply learning how to train like a pro/ be a pro… racing was the cherry on top. Personally I was simply hoping to be "in the race" at a few races and not be a back of the pack pro for too long.


How important are sponsors to making it in this sport, and what has your experience been like thus far on the “business side” of triathlon?

Sponsors are extremely important for a professional’s success in this sport. I have been blessed with support from a group of sponsors that I would do anything for. For the 2013 year I have been racing with Team RACC which stands for Racers Against Childhood Cancer. The team’s goal is to raise awareness and money for the fight against childhood cancer. Leading into my 70.3 Racine race I put on a fundraiser which raised $1500 for RACC, which was stupendous. Endurance House Middleton helps me with all my training and race product needs, which is SO important, as well as giving me a platform for private and group coaching which is a big passion of mine. CycleOps takes my bike training to the next level with their PowerTap and trainer products which are by far the best in the business. PowerBar supplies me with my training and racing nutrition needs in the form of gels, bars, and drinks. Peak Performance Massage in Madison keeps my body tuned up and ready to endure the torture I put it through, haha. Last but not least, Newton running shoes are simply the best! My biggest sponsors of all, however, are my parents, who supply the roof over my head and brought me up to be the person I am today.

What impact has your coach had on you thus far?

My coach, Will Smith, (not the Fresh Prince) has taken my training to a new level this year. The experience that he brings to the table is like no other. He keeps my training hard, fun and smart, and I am looking forward to what the future holds.

Have you been “star struck” by anyone you’ve raced thus far? Which pros will you eventually be most intimidated to see on the start line with you?

As a pro myself I can’t be star struck like I used to be when I was an age grouper. Yes, I look up to a few pros but there is no drooling over any of them, haha. I do have to say that it was pretty cool meeting Greg Bennett after placing 2nd to him in Raleigh… he was a cool guy. There are plenty of guys I am intimidated to race against at the moment, but that won’t be for too long.

I know (US Olympian) Gwen Jorgensen also hails from Wisconsin, so it can be done, but do you ever feel you’re at a disadvantage living in a colder climate? Will you train in WI year-round? 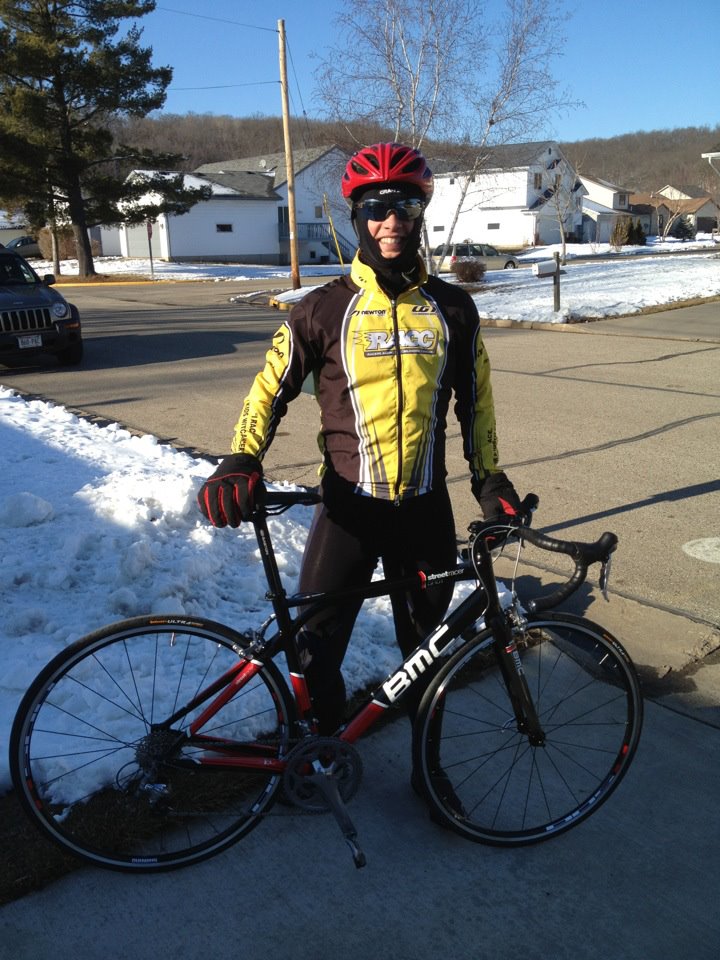 I think living in the colder climate can actually be an advantage at times. It allows me to have a forced "down time," as well as change up the same routine year in and year out. Last year I started doing some snow shoe running which is a very fun and challenging workout and I’m excited to do that again this winter. Also, thanks to my CycleOps trainer, a few friends, and the pain cave, I can sometimes come out of winter in better biking shape then I am all summer. I do plan on continuing to train in Wisconsin year round, but I also hope to do at least one long training camp in a warmer climate over the winter.

Thanks for your time, Paul, and best of luck through the rest of the season and beyond!


Follow Paul as he continues his stellar rookie campaign: