After kicking the season off with IMSG 70.3 in May, the Jordanelle triathlon Saturday marked my fourth and final olympic distance race of the year. I only have one tri left on the schedule, a sprint next month, and I'm kind of glad to have the olympics out of the way! For 70.3s and Ironman, there's obviously an element of pacing... they hurt in their own way, of course, but there’s at least a portion of the race in which you feel somewhat comfortable. At the other end of the spectrum, sprint distance races are all-out, but they're also over much quicker. Olympics are that middle ground, where to be successful in terms of placing you have to go virtually all out. Try to "pace" yourself and you're pretty much out of the game. Don’t get me wrong, it’s totally fine to do a race for the experience and with a more comfortable pace. People have different goals and objectives. Personally I like to test myself, so it’s basically self-inflicted pain for 2+ hours :)

Jordanelle was no different… in fact, if anything heat and hills made it worse than the rest. This race had an unusually late 9am start, which got pushed back to 9:30 due to construction on one of the main travel routes to the race. Jordanelle is held not far from Park City, in and around a beautiful state park called Rockcliff. As usual, the morning mountain air was cool, but it was already getting toasty as I got ready in transition. I could tell that unlike my last race at Spudman, we were in for a scorcher. 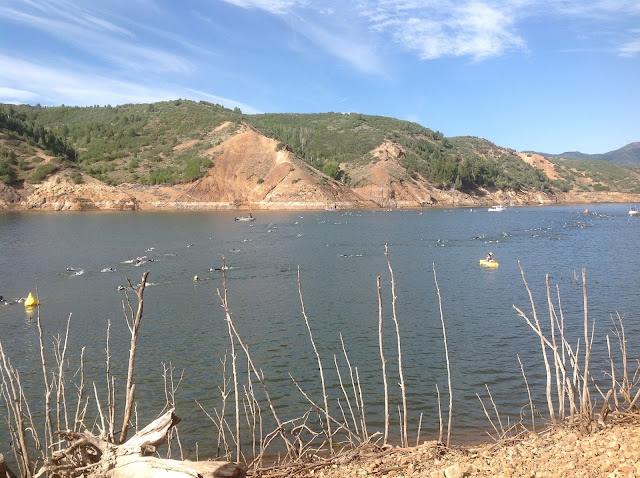 The water level at Jordanelle Reservoir was lower than past years, and similar to Echo last month, there was a long walk from transition to the water's edge. A good section of the path was dirt and gravel, so I grabbed my socks and running shoes to save my feet.

The water was a perfect temperature, just a tad chilly at first, but not cold. This was a typical olympic distance swim course of two 750 meter loops. I was hoping to draft as well as I did at Spudman, but when the gun went off for my wave I found myself in an unfamiliar and scary place… out in front! I started to wonder if I was going the right way... where is everyone? Eventually several people passed me, making me feel more in my element. Besides, I hear lurking sea creatures only attack the guys in the lead, right?


After a while my right shoulder started to tighten up, which happens to me from time to time and is never incredibly fun. I probably just need to stretch and warm it up more. At some races the swim feels relatively effortless, whereas others are more of the “grind it out” variety. By the second buoy it was clear that this was going to be the latter. That said, I battled the best I could and was relatively happy with my time. All in all I’m guessing the shoulder thing only cost me 30-40 seconds or so.

I worked my wetsuit down, found my stuff in the designated "shoe zone," and ran to transition. It took over 4 minutes, so it was a bit of a haul… uphill at that.

The bike course was an out and back through some beautiful countryside. My legs didn't feel very snappy in the beginning, but I put my head down and went to work. I'm usually "in the zone" most of the time, but every now and then I try to take a peek around and recognize when I'm in a beautiful place. It was easier to appreciate on the way back, as the first half was a gradual climb, or "false flat" as they call it, the whole way. The way back was more enjoyable with the slight descent, but still painful in its own right. I stayed on the gas, and similar to the swim it was a bit of a grind. It was heating up, and I made sure to drink my entire bottle of Hammer Perpetuem and take in a PowerGel. I also had this song intermittently running through my head. I don’t care who you are, if that first minute or so doesn’t get you pumped, then you do not have a pulse. Go see a doctor immediately.

I narrowly avoided wiping out on my dismount, then jogged into T2. I never bike with socks, but always run with them. Without an extra pair, I slipped on the damp and dirty ones used in the post-swim run to T1. I figured blisters would eventually become an issue, but hoped they wouldn't get too bad with only ~6 miles to run.

The heat immediately made its presence felt as I started out on the run, and hydrating/trying to stay cool became much more of a priority than previous races. I grabbed water at every aid station, drinking about half and dumping the rest on my head and down my shirt. The course was two loops, with roughly half on roads and half on rugged dirt trails throughout the park. The first section was a long gradual climb, and I tried to think positive thoughts despite my legs not feeling terrific off the bike in addition to the heat and hills. Some downhill finally came shortly before mile 2 in the form of a steep rocky descent. As I learned back in my cross country days, I tried to let gravity do the work and just "fall" down the descents, all while trying not to sprain an ankle on the rocks. As my Garmin beeped to indicate 2 miles, the following segment randomly popped into my head. Weird, but strangely effective in keeping my spirits up.

My feet started hurting as I could feel blisters beginning to form, but it wasn't bad enough to affect my stride. The second time up the long climb was slower than the first, and it was a bit demoralizing to know that my pace was fading. There wasn’t anyone around me that I knew to gauge off of, making it hard to tell if I was struggling more than others or on par with the field. With that wonderful “cottonmouth” feeling rising, I closed out the last 800 meters as hard as I could, passing a guy who had gapped me earlier in the race in the homestretch.


It felt like a very sub-par performance, and I wondered if for literally the first time, my bike split vs. the field would be better than my run. However, looking at the results later in the day, I was surprised with how my run held up.

Not my best result ever, but all in all a good, painful day at the office. 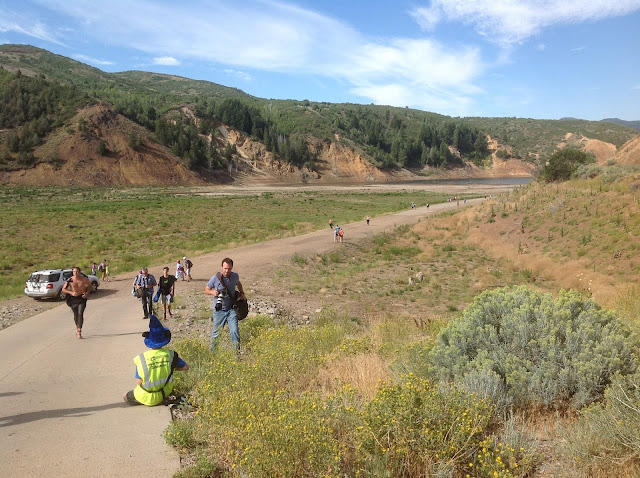 “the question is not when they gonna stop, but who is gonna stop'em"