As a follow up to the Reynolds interview, here's a review of their 58mm Aero wheel by UK-based PROCYCLING magazine. The article itself is below, but I thought I'd save your eyes with larger text.

"The new Aero range of carbon clinchers from Reynolds is gunning straight for Zipp and Enve’s top wheels as fast, light clinchers that are stable in windy conditions. The 58 is the shallowest of the set, which also includes 72 and 90 models. Instead of using a ‘fat’ profile like their rivals, now widely copied, Reynolds has developed this sharp-edged shape called DET – Dispersive Effect Termination – which is claimed to offer even better stability in blustery conditions. The DET shape is very wide at the brake track but narrows to a sharp edge at the spoke bed. Its workings are complex; designer Paul Lew told us it would take two hours to explain. In a nutshell, he used his experience of designing airfoils with stable flight characteristics for military drone aircraft and applied the theories to a bicycle wheel. A 12-page summary is available online, plus a huge white paper if you’re a boffin. The 58s are instantly impressive. These are the stiffest conventionally-spoked wheels we’ve tested so they’re great for sprinting, feel much lighter than their measured 1,605g when climbing and they rail around corners. Back to back with Mavic R-Sys SLRs, paragons of rigidity with a big advantage due to their tubular carbon spokes, there was nothing in it. Reynolds focuses on their DET tech in the 58s but when we asked Lew he told us that a hybrid carbon laminate is used for the rim, with each section – spoke face, sidewall, brake track, tyre bed – made in a specific material. The Aero range uses the familiar Reynolds Cryo Blue brake pads and CTg brake track tech, claimed to run cooler while still offering plenty of power. We found the braking to be great in the dry but there’s a long pause before anything happens in the wet, after which they do brake firmly. They feel as fast as they claim to be, needing less power to cruise at 35kph. The real magic, though, is the stability. We went out on a gale force day to find the most exposed road and even in 70kph crosswinds (with a 71kg rider) the 58s stay calm and barely move off line an inch. You never get a heart-in-mouth moment. Are they better than the Zipp 404 Firecrest and Enve 6.7? Yes, we’ve no doubt. The 58 aero is more stable, a lot stiffer, at least as fast and usefully cheaper too. We have a new mid-depth champion." 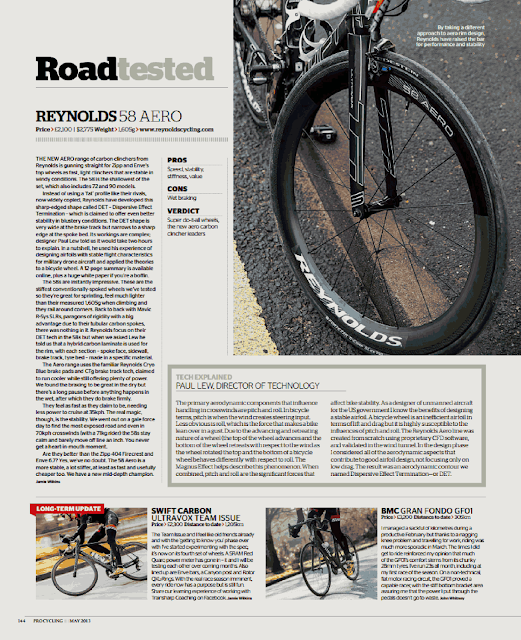 "The primary aerodynamic components that influence handling in crosswinds are pitch and roll. in bicycle terms, pitch is when the wind creates steering input. Less obvious is roll, which is the force that makes a bike lean over in a gust. Due to the advancing and retreating nature of a wheel (the top of the wheel advances and the bottom of the wheel retreats with respect to the wind as the wheel rotates) the top and the bottom of a bicycle wheel behaves differently with respect to roll. The Magnus effect helps describe this phenomenon. When combined, pitch and roll are the significant forces that affect bike stability. As a designer of unmanned aircraft for the US government I know the benefits of designing a stable airfoil. A bicycle wheel is an inefficient airfoil in terms of lift and drag but it is highly susceptible to the influences of pitch and roll. The Reynolds Aero line was created from scratch using proprietary CFD software, and validated in the wind tunnel. In the design phase I considered all of the aerodynamic aspects that contribute to good airfoil design, not focusing only on low drag. The result was an aerodynamic contour we named Dispersive Effect Termination—or DET."


ps. In case you missed the link above... I learned a new word today!

A boffin is British slang for a scientist, engineer, or other person engaged in technical or scientific work. The original World War II conception of war-winning researchers means that the character tends to have more positive connotations than related characterisations like egghead, nerd, or geek.