Next week I'll be driving north to the thriving metropolis of Burley, ID to race the 27th(!) annual  “Spudman” triathlon. It seems only appropriate that Idaho’s largest non-Ironman branded race honors the potato, right?? As I wrote about a few months ago, I made a lot of rookie mistakes in my first ever triathlon in 2003. Well, my 3rd race ever, the 2004 Spudman, wasn’t exactly perfect either. Since I’ll be doing this race again after a nine-year hiatus, I thought it would be fun to recount my experience there. 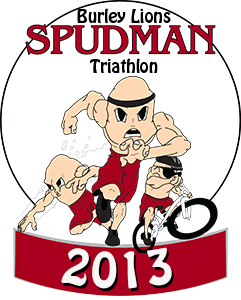 My college buddy Chris and I had run a marathon together, in addition to doing a couple of "splash and dash" (swim/run) races on campus. After he graduated and moved to Portland, we decided to step up to a triathlon for one last hurrah. Being somewhat middle ground, the Spudman was selected. I had gotten married a few months before, and among our wedding gifts was a tent that Lindsay and I decided to test out in Burley. It was a great plan, with the only catch being that the tent was a piece of crap (Chris had his own nice tent). Ours was ridiculously small to begin with, and was either missing a pole or something or just a defective product. We spent hours trying to figure the thing out to no avail. We could fit inside, but the sides sagged in so far that they were touching us at all times. To top it off, it was only a couple feet high. I’m not very claustrophobic, but it was definitely pushing the limit.

I slept very little, but woke up in the night to find that Lindsay was nowhere to be found. To this day I don’t know how she slipped out of that “tent” without waking me. She wasn’t in the car, and after 30 min or so I started getting a little worried. A while later she came stumbling through the darkness after having journeyed to a gas station to use the restroom. This is camping, woman… just go in the woods!


Eventually we staggered into the morning air and got ready to go. We were up plenty early, but time quickly started slipping through our fingers. Spudman is a point to point course, with the transition area in a different location than the start. After setting up our stuff, it was taking forever to get to the start. Local police had seemingly blocked off every route, and we were barely moving. Without other options, finally Chris and I hopped out of the car and started running along the banks of the river to the start. It was further away than we thought, and we got there right as the gun went off. We jumped in and immediately started swimming.

Besides that, the swim was uneventful. I waited a few seconds in transition and sure enough Chris emerged, so we hopped on our bikes and took off together. I had borrowed a mountain bike for my first triathlon the year before, but had a shiny new bike for Spudman. In my mind this thing was a rocket ship set for takeoff. Time to teach these guys a lesson, I thought. In reality it wasn’t a triathlon bike, nor was it a road bike. It was more like a “commuter” bike, with horizontal handlebars and toe loops on the pedals. Side note: I later installed pedals and aerobars and did a lot of races (including two half-Ironmans) on this bike through 2010, and Lindsay rides it to this day. It gets the job done, but let’s just say it’s not the prettiest horse in the stable on race day!

As you might have guessed, bike after bike went by us... it was like a parade out there. In fact, I don't think we passed anyone. If we did it couldn't have been more than 2 or 3. Some of it was the bike, but most was me just being undertrained. On top of that I had brought zero nutrition and was getting dehydrated and hungry. From my running background where longer races were always stocked with aid stations, I just assumed that a longer (olympic) triathlon would be supported on the bike. Chris was almost as dumb as I was, but I think he had a little something. This is laughable now, but I remember Chris asking a guy if we could have a drink from his water bottle. He obliged, but it was awkward. The bike mercifully ended and morale was boosted as we actually started passing some people on the run. Our pace slowed with each mile, but we eventually crossed the line. Immediately we began consuming way more than our fair share at the post-race buffet, like inviting Joey Chestnut to the family picnic. Never again have I eaten even close to that amount post-race. I later got a large blizzard from Dairy Queen for good measure.

I'll be camping again for old time's sake, this time in a functional tent. Besides camping, I’m hoping for no repeats of 2004 (although a post-race blizzard may be acceptable).