A few months ago I wrote about the infamous “nod of approval,” a pure symbol of the camaraderie that exists among most runners and cyclists on the road. As we all know, such compassion is generally absent when it comes to one vehicle to another. The phenomenon known as “road rage” is apparent everywhere, and can even escalate at times to all-out brawls in the street. Although many motorists are friendly to runners and cyclists, unfortunately some rage exists here as well. When I lived in France as a teenager, it was common to see packs of riders taking up the whole lane. I’m sure drivers were annoyed at times, but it was much more accepted as part of the culture. 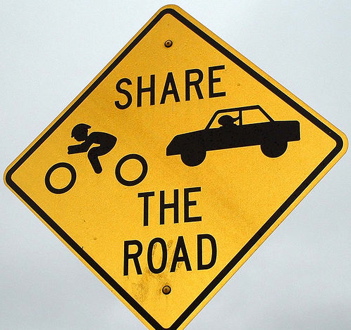 A few weeks ago, Triple Threat team member Shelley Oberhofer was involved in a hit and run accident in Connecticut in which the driver knocked her over and sped away without stopping. Thankfully she had only minor injuries… it could have been a lot worse. I read an article on Slowtwitch the other day about an accident involving professional Richie Cunningham in which the driver blatantly slammed on his brakes in front of a group including Triple Threat friend Patrick Evoe, Joe Gambles, and Ben Hoffman. By all accounts it was an intentional act of anger, and unfortunately for Richie, his great 2013 season has been brought to a halt.


I’ll admit, as a driver it bothers me when I see cyclists “riding stupid.” They don’t have a free pass in my book, even though I’m one of them. It’s up to us as cyclists to do our part to ride safely, follow traffic laws, and stay out of the way as much as possible. Some roads probably shouldn’t be ridden on, even if it’s legal to do so.


On the other hand, as a cyclist, it obviously bothers me when motorists are overly aggressive or downright moronic. I’ve been honked at, flipped off, and yelled at more times than I can remember. I reached out to a few readers and team members asking “what is the rudest and/or funniest thing that a passing car has ever done to you?”
Here are some of their responses:

"Oh man... so many, they are all kind of a blur. Lots of stuff like 'there goes Lance' or “are you gonna win the Tour de France?”

"Oddly enough, I don’t think anyone has ever yelled at me. Plenty of honks, but no yells."

"A chick flashed me once. Phenomenal energy boost”

"Mainly people just flip me off"