Stewart Nixon (repping CO on our national team) is a recurring columnist on the Triple Threat blog. He's been a triathlete for 25+ years, and has a ton of knowledge on the sport. Here he breaks down some of the different types of indoor trainers, along with pros and cons of each. No matter which you choose, put in the work this off season and you'll emerge in the spring a much stronger cyclist!

With the conclusion of the Ironman World Championships in Kona, much of the triathlon world in North America enters into the off season and indoor riding as temperatures drop and roads become snow covered. The talk of “pain caves” begins to abound as well. Today, I’m going to describe some of the many indoor bike trainers available and some of their pros and cons. I will limit this to trainers which utilize your own bike. These days, indoor trainers are often not relegated to just the off season, as some triathletes use them for key speed sessions during the race season. Riders don’t have to worry about stoplights, road rage, or environmental factors while riding inside, allowing for a more focused training session.

Stationary bike trainers fall into one of two categories: rollers and trainers. Trainers are further categorized by the type of resistance unit on them. Rollers use both wheels while riding while trainers use only the rear wheel. 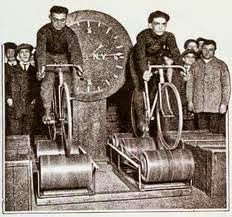 For the uninitiated, rollers are probably the earliest form of bike trainer dating back to around the time of the bicycle as we know it in its current form. Despite their age, they still pose a great challenge to those who first try riding them. Their design is simple: a metal frame which holds three drums. Two drums at the rear which cradle the rear wheel and one drum in front on which the front wheel sits. The front drum is connected to the forward rear drum via a large rubber band which allows both wheels to turn during riding. Since the bike is not locked down, like on wind trainers and the like, the rider must balance the bike while riding. Therefore, they are excellent at developing balance and riding a straight line. The first few rides are best done in a doorway so you can use the door jamb to keep yourself upright. Out of saddle efforts are virtually unthinkable, as the rider can be quickly launched off the unit (ask me how I know) but with MUCH practice, can eventually be performed. Another benefit of rollers is developing a more balanced pedal stroke. This is done by watching the band that connects the front drum to the rear.  Ideally, there should be no bounce in the band. There is little resistance while riding classic rollers, except through changing gears. You can add extra resistance by adding a magnetic resistance unit, driven off the most rear drum, or a head wind unit, driven off the front drum. There are also rollers with smaller diameter drums which increase the basic resistance over classic rollers. Rollers are not too expensive but they are usually not very portable. While some units can fold up, by and large they are a bit bulky to transport. 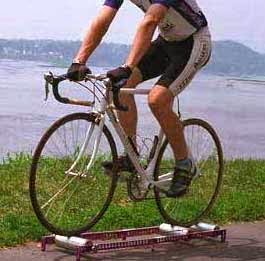 A wind trainer uses a fan to provide resistance. The rear of the bike is clamped into the frame of the trainer at the rear dropouts and the rear wheel sits on a small roller which is attached to a bladed fan which pushes the air to provide resistance. In theory, the resistance is supposed to give the rider a realistic road feeling. In reality, while the resistance is progressive, it is not nearly as close to road riding as one would expect, as overall the resistance is quite limited. Out of saddle efforts are secure (unless you haven’t clamped the bike tight enough) but wind trainers tend to be noisy due to the fan.  They are pretty inexpensive and are quite portable. 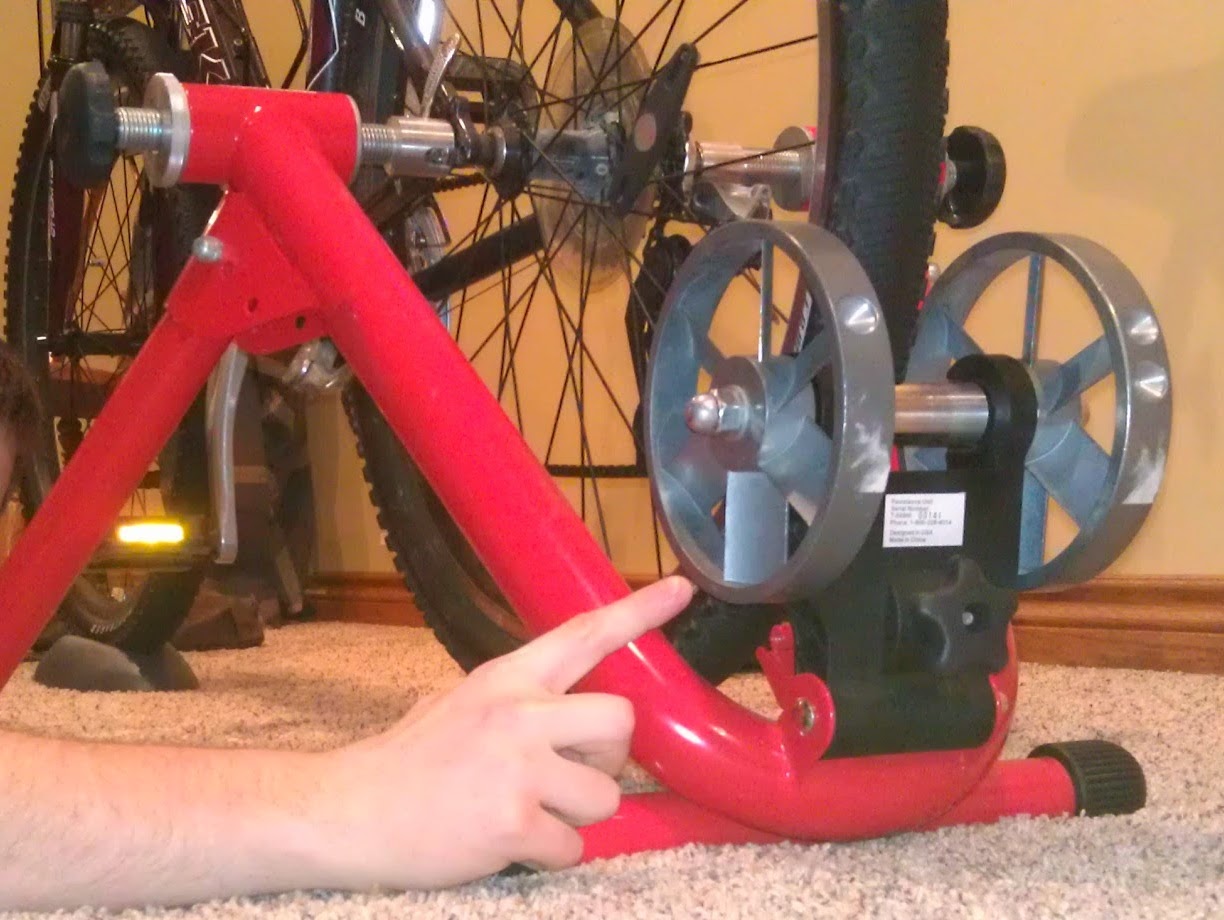 Magnetic trainers use the same frame as a wind trainer but instead of a fan attached to the roller, they have a magnetic flywheel resistance unit. Often, the resistance is user adjustable either at the flywheel, necessitating dismounting to increase/decrease resistance, or by means of a shifter mounted to the handlebars providing “on the fly” adjusting. Magnetic trainers are much quieter compared to fan units. The resistance is not progressive, although overall higher than a fan unit. They are also prone to breaking internally. Since they use the same frame as wind trainers, they are just as portable, making transporting them to the track for a ride/run session a snap. 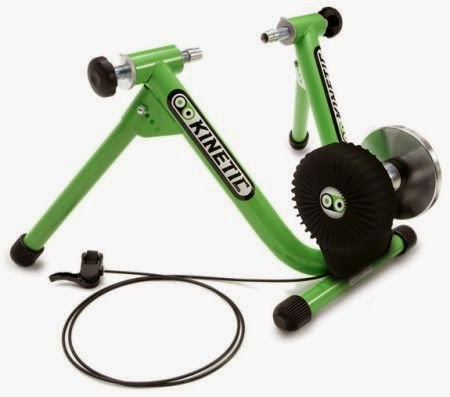 Fluid trainers use the same frame as wind and magnetic trainers, but combine a magnetic flywheel with fluid resistance chambers. Fluid trainers have a progressive resistance (the harder you pedal, the more resistance) which provide a very close to real world riding experience. They are virtually silent compared to wind and magnetic units and are just as portable. Out of saddle efforts are secure, as the bike is clamped down in the unit (yes, I have fallen out of a trainer). The repeated cycle of heat and fluid expansion and contraction can result in fluid leaks, although this is rare, and they are a bit pricier than their brothers but not prohibitively so. Some manufacturers offer an additional, heavier flywheel that can attach to the main unit to provide more resistance. 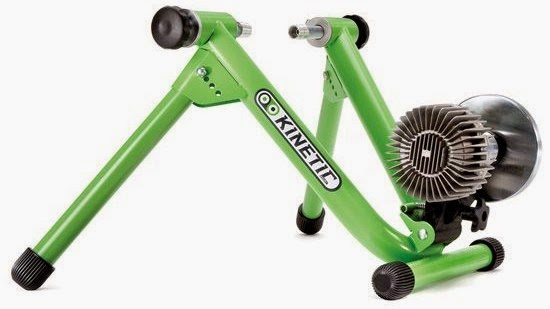 Virtual reality, or VR, trainers are basically a trainer frame with a roller but are equipped with a computer with virtual world software. The bike is attached in pretty much the same way as other trainers, but the software controls the resistance at the roller instead of relying on wind, magnets or fluid. This enables the rider to really “feel” the road as the computer adjusts the load at the flywheel to compensate for going uphill or downhill, flats or headwinds and tailwinds. So for climbing a hill or riding into a headwind one would shift to an easier gear to compensate for the added resistance, just as they would on the road, which is the opposite of what you would do when simulating that on other trainers.  Another advantage is that some models can be linked up to allow multiple users to connect to each other and ride the same course for head-to-head riding/racing. VR units generally also display a rider’s metrics: speed, cadence, mileage, power, etc. They are not very portable, tend to be quite pricey and require a power supply in order to operate. 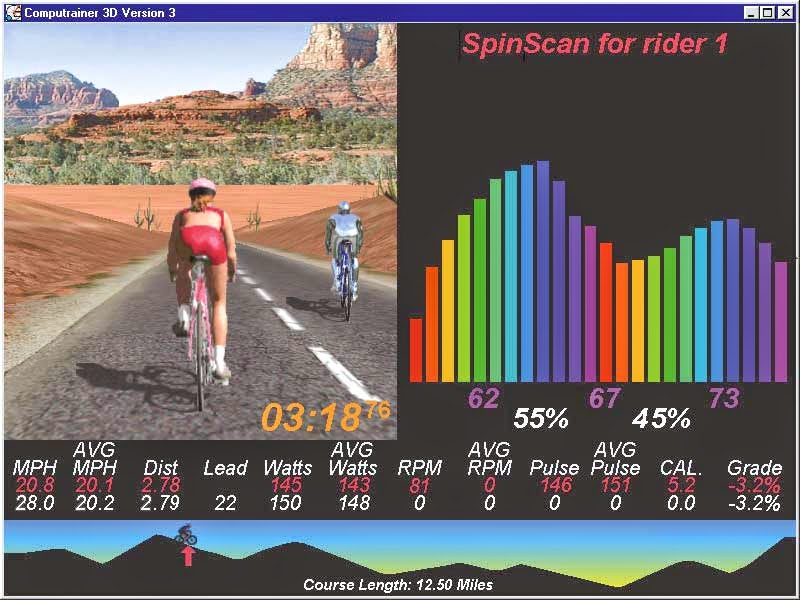 These nifty pieces connect at the rear of the bike, like others, but you don’t use your rear wheel. Instead, you place the dropouts on the unit which has a cassette already attached. Resistance is achieved by a large fan attached to the rear of the unit and driven by a belt attached to the cassette. Since the fan is much larger than the fans on a traditional wind trainer, the overall resistance curve is much greater. But since it utilizes a fan, the noise generated can be a bit loud and the price tag is up there. 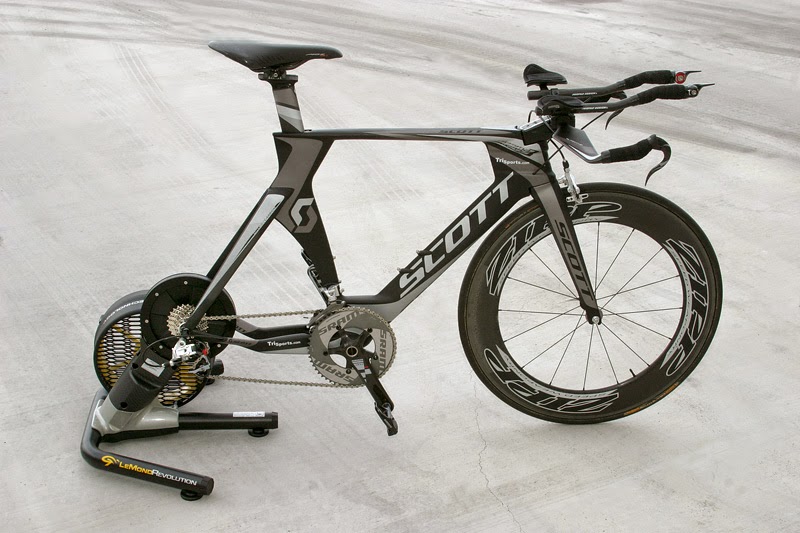 Tire wear is a concern because of heat build up from the roller for each of the trainers using a traditional rear wheel. The good news is that many tire manufacturers offer a “trainer only” tire specifically designed to withstand the heat from riding a trainer. They are only available in clincher form, so tubular riders (like me) would need to purchase an additional clincher wheel to use in the trainer.

Keeping focused while riding inside has long been the bane of our indoor training existence. Trying to get the most bang out of riding inside can be difficult, and many sessions can turn into aimless pedaling below a beneficial level if you don’t have a plan ahead of time. VR type trainers accomplish this through the software and computer, adjusting the resistance automatically as you ride along. TVs are commonly used to keep boredom at bay. Watching a favorite movie, TV show or past race coverage are popular. However, even having those on the screen one can end up “just cruising along.”  If you want a focused training session, programs such as Triple Threat team sponsor The Sufferfest (see banner ad on this page), or others such as Spinervals and TrainerRoad are available that take you through different intervals depending on the type of workout planned.

Finally, indoor training can take a toll on your bike. I covered steps you can take to keep your machine clean and running in tip top shape as you grind out the miles in my posts on Spring Bike Maintenance.