We were extremely proud to have two Triple Threat team members at Ironman Chattanooga: Amy Fletcher (Indiana) and Gina Shand (Virginia). Here is Amy's report of that awesome day!


The goal from the very beginning was to do something in my training that would result in my being able to run the run in IMCHOO.
We were up at 4:00 to head to Transition and made it to the swim start line by 5:00 then had 2 ½ hours to wait to jump in! 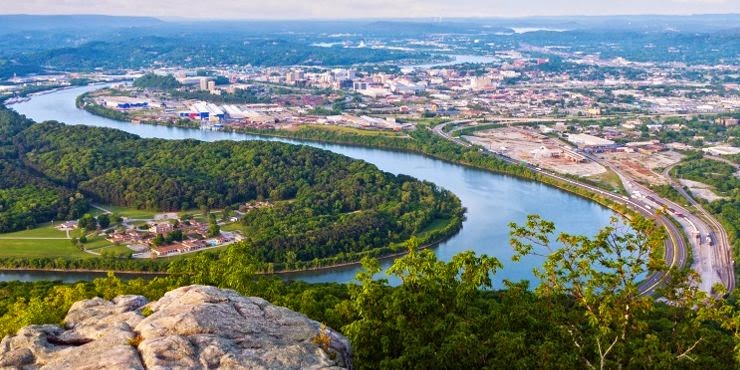 SWIM – Goal 1:10:00  77 degrees – wore tri shorts and tri top.
Once we went down the swim chute, spectators could no longer see their loved one, so I kissed Doug good-bye and headed towards the water. This was a pier start much like IMLOU except there is no upstream part. Once we enter the water, it is all downstream with the current. I entered the water pretty close to 7:30, I believe. I noticed I was thirsty during the swim, as normal. Not sure if I really was thirsty or if it was just that my mouth was dry. This usually is the case though. I planned to swim to the left shore of the island as my first landmark, but I could not see the island. Each time I sighted, I kept seeing a blue strobe that I assumed was a police boat. I HOPED it was stationary because that’s where I started aiming. I was way further to the right (towards the middle of the river) than the other swimmers, but I sincerely thought they were taking a curved path and I was taking a straighter path. Kayakers did not seem too freaked out by where I was, so I stayed with my plan. Turns out, I was right!

The island starts at 1.2 miles, so I knew I was half-way. The next .6 miles was along the shore of the island and I breathe on my right, so I did not sight much. From the end of the island (1.8 miles), there are three bridges to the finish. There are some stunning sights through this section with the bridges and the banks of the river. People had commented that during the practice swim Saturday, they had not turned hard enough off the last buoy and nearly missed the swim exit due to current. People exaggerate. It was, however, my plan to stay left (towards the shore) once I passed the island. I thought that with a river current, I could swim it in 1:10:00. I climbed up the stairs and started to run. When I looked at my watch, I was shocked to see...