A few months ago I posted about buying some 2014 Reynolds Strike race wheels. I was excited to get my hands on them, but had to admire them from afar for a while as I spent most of my riding time on the trainer. Thankfully spring is in full bloom, and I’ve finally been able to test them out over the last couple weeks. My initial thoughts are that they look great, are really fun to ride, and climb like a Nepalese Sherpa (wow, is that really two Sherpa references in the past two weeks??). 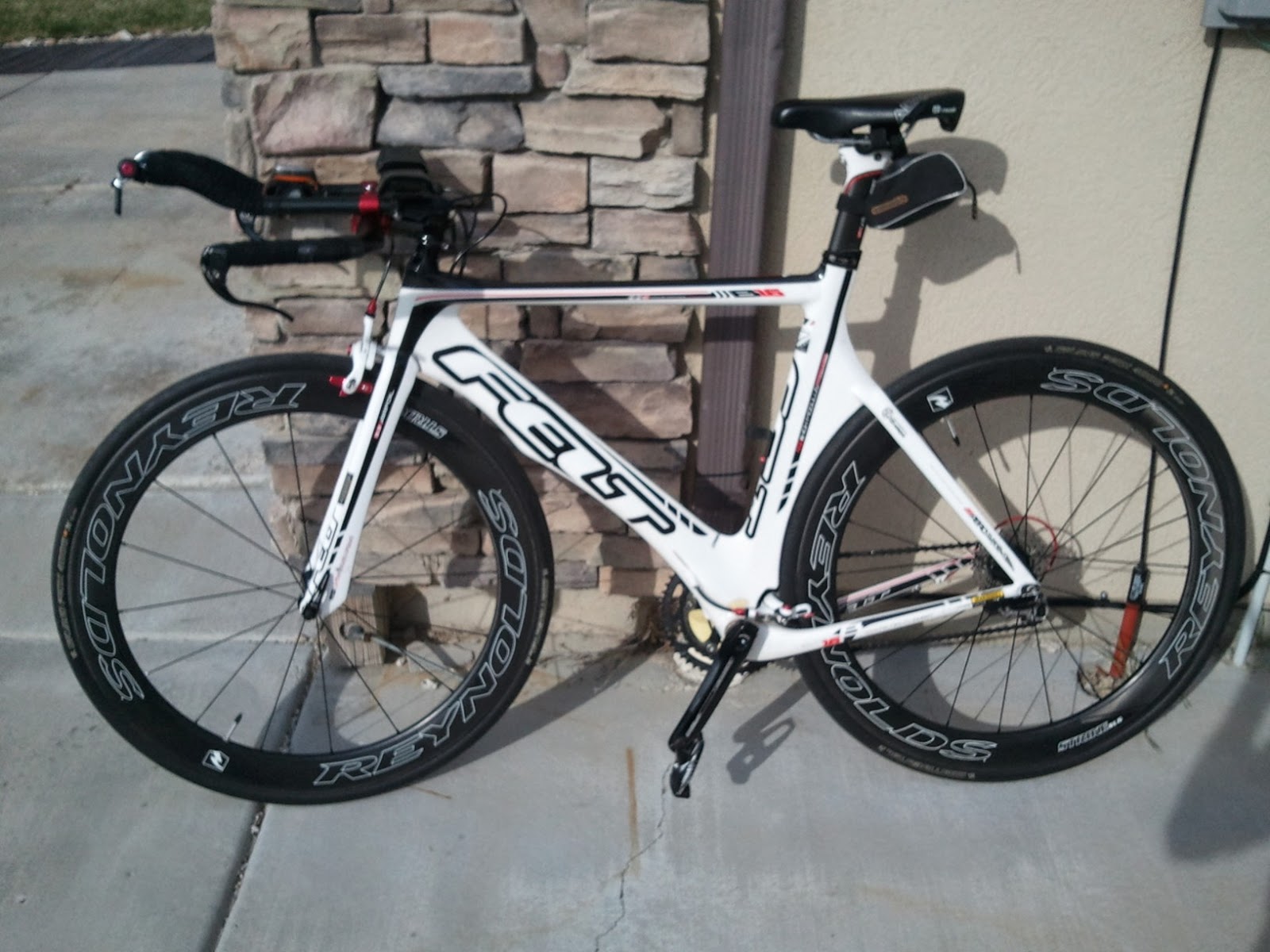 For various reasons I put off buying race wheels in the past. Despite doing my first race in 2003, this is my first set. This is the opposite of some people’s mentality… few of us were handed the keys to a Maserati when we turned 16, yet some newbies feel the need to rush out and buy an expensive bike and wheels for their maiden voyage! It does go both ways though. Look around transition and you’ll see a lot of shiny Maseratis, but also a number of 80’s model Buicks. I respect that! Get your feet wet in the sport and pay your dues, then reward yourself with something nice. For those of you who may soon be in the market, I thought it might be helpful to share some of the practical stuff I found to go from taking your wheels out of the box to actually going for a ride.

The main appeal of race wheels is that lighter + more aerodynamic = you go faster. As part of their aerodynamic design, they have deeper rims compared to your kid’s dirt bike or grandma’s beach cruiser. The valve stem on many tubes in a bike shop or wherever isn’t long enough for deep rims. For example, my wheels are 62mm deep, yet the valve on the tubes I had were ~40mm, making it impossible to put air in my tires without valve extenders.

I read this great article by Greg Kopecky of Slowtwitch, which went over this topic in detail. Mid-way through last season I started racing with a little Flat Attack tire sealant as insurance against a cheap flat due to a thorn or piece of glass. As such, I have tubes with a removable core valve stem (for injecting the sealant). Based on Greg’s article, I bought some Stan’s valve extenders, using Teflon tape before threading them on per his suggestion. His article is a great resource for whatever your set up is. I later discovered that valve extenders came with the wheels (I’m a genius).

Note: Make sure to carry a spare tube with a valve that’s either long enough as it is or with valve extenders on all ready to go. This is something that can be easily overlooked. If you don't and you get a flat, your spare won't do you any good. I'll be carrying a Bontrager tube with an 80mm valve, which should work since my rims are 62mm deep. However, if your rims are 80mm deep, obviously this wouldn't work for you.

The trend over the last few years is for race wheels to be slightly wider than they used to be. The stock aluminum wheels that came on my Felt are 23mm wide (pretty standard), yet the Reynolds Strikes are 25mm. Big deal, right? Well, if you try to put them on for the first time the morning of your race, you’ll be in panic mode screaming that they don’t fit. In reality, all it takes is widening the brake track with a few twists of an allen wrench. I had to essentially open my brakes up as wide as they go… still a pretty tight fit, but it works. Likewise, make sure to tighten the brake track up when you switch back to your more narrow tires. Just last week a friend who races in Kona every year posted on Facebook that he forgot to do this. As he tried to slow down going down a big hill his brakes were too wide to work, so he had to drag his feet to stop!

Note: You can buy 25mm tires to match 25mm race wheels if you want, but 23mm tires on 25mm rims works fine too.

Something else to consider is brake pads. My wheels came with special brake pads that are compatible with the carbon surface of the wheels. I’m not sure if all race wheels are similar in that regard, but I was told that my old, traditional brake pads for aluminum wheels could really damage the carbon. With a simple allen wrench it’s pretty easy to swap the pads, but pay your local bike shop a visit if you need help.

New wheels means you also need to transfer the cassette over from your rear wheel, unless you prefer propelling yourself forward Flintstone style. You could also buy a new one if you’ll be swapping back and forth a lot and don’t want to deal with it.

I tried to summon my inner Stewart Nixon by breaking out my "chain whip" and lock ring tools (which I owned but had never used) to remove the cassette. I thought it might be tough but it wasn't. Since it was off I figured I’d take a few minutes to clean the cassette with water and some degreaser spray.

The hub of your new wheel may be slightly longer or shorter than your old wheel. I thought that might be the case, so I put one of the 1mm spacers that came with the wheels behind the cassette. With the cassette on, I proudly went out for a test ride around the block, only to discover that the gears were rattling around and clearly needed another spacer. I removed the cassette and put on another spacer, but now I couldn’t get it to lock on.  @#*&#  Did I really need something in between 1 and 2 millimeters?? Turns out there is such a thing, as I bought a 1.75mm spacer for a couple bucks at a local shop. That 0.25mm was the difference, and I was able to lock the cassette on without any rattling from excess space.

In summary, there are some things to be aware of, but it’s really not that difficult. Ride hard, have fun, and be safe!