Following a “somewhat toxic post-collegiate lifestyle,” Dave Fisher turned to triathlon as motivation to quit smoking. From there, with surgical precision he’s moved from a back of the pack triathlete to a podium regular in a few short years. This father of three has a “guiding principle to have fun above all else,” and is on record saying that if races were free he’d race every weekend.

I played a lot of different sports when I was young, but I always rode bikes. I commuted on my bike everywhere through high school and college. After college, everything kind of fell apart. I'm ashamed, but believe it or not, triathlon started as motivation to quit smoking! I'd picked up the nasty habit and was having a lot of trouble quitting, so I signed up for a local sprint triathlon figuring that I had to quit or I'd quite literally die. Nothing like the prospect of death to motivate yourself! Training for the race, I rediscovered my love of the bike, and with it fell in love with the sport.

You wrote about your "somewhat toxic post-collegiate lifestyle." Assuming you weren't referring to working at a nuclear power plant, what was the motivation to change course?

A little radiation might have been better than what I was doing to my body back then. Jokes aside, I did it both for myself and for my kids. It was a lot of little things - I was having trouble breathing well enough to sing lullabies, my feet hurt on long walks, and I couldn't stand looking at pictures I was in, which are all pretty awful things as a father. It wasn't so dire that I thought I was staring an early meeting with the grim reaper down, but I definitely became conscious that I was on the wrong path. Once I started riding again, I just felt happy, like a kid again. The same thing happened with swimming and eventually with running. That joy carried me forward then and still does now. There's another element to it as well, which feeds my inner nerd. This whole thing is a lot like a big science project. If I change this part of my swim stroke, this happens, if I change my diet and cut this and add that, this happens, if I structure my training plan this way, this happens, etc. It's a non-stop learning process and there is so much to learn and integrate, and I enjoy that. 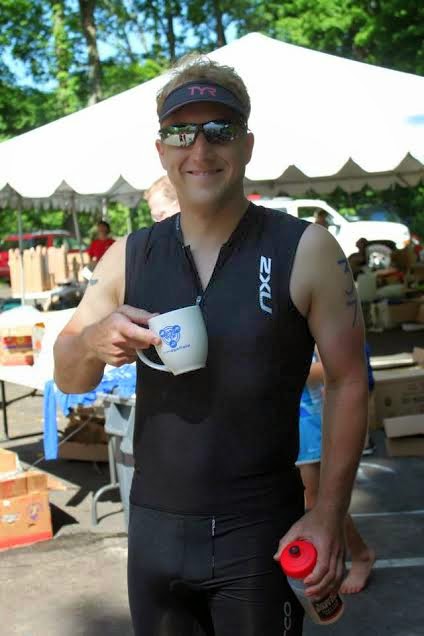 How would you sum up your 2013 season, and what was the highlight/lowlight?

2013 was phenomenal, there's no other way to put it. There were a lot of incredible experiences, but if I had to pick one it would be the first tri of the season, the same one that had been my first race a few years ago. I had been training for a half iron distance that was a few weeks later and surprisingly came in third for my age group against a strong field. That was pretty shocking, I'd never been on the podium before, but it continued to happen several times over the summer! I've literally gone from the back to the front, and it blows my mind. The only thing that came close to being a lowlight was the latter part of the run on the half distance where I kind of handed it in and walked for a while, but it taught me a lot so I can't look back on it with regrets.

I'm going to race roughly every other weekend this summer, from sprint distances to halfs. I had originally planned to build up to my first full distance in Cedar Point, but I've just recently reconciled it won't be happening. I couldn't put together the logistics with my family to make it work. Shifting the focus off that race puts it back on the shorter distances, so now the goal is to try and win my age group a few times this summer, and try to enjoy it as much as possible with my family and friends. I'm also helping in training a few people, which is really rewarding. If I can help others enjoy this as much as I do, there's nothing but upside.


With Cedar Point, were you deliberately shying away from an Ironman-branded race as a way to "stick it to The Man"? What are your thoughts on the corporate side of triathlon in its current state?

I wish I could do Cedar Point! Stop rubbing it in! When I WAS still looking ahead to the it, it wasn't deliberately trying to avoid the Ironman brand, but I don't think the WTC is really after athletes with families from the Northeast. Here's the evidence - the closest WTC race to me is Lake Placid, which sold out some time back in 1983 from what I can tell. The next closest are either Louisville or Mont Tremblant, both of which are a very tough sell to my three young children. Kids need something to do for two days at least, and there just isn't anything for them in either of those places. I was looking at Chesapeake Man, which would allow me to stay with my family in the DC area, but its future is clouded to say the least. On the other hand, Rev3 are putting races on at amusement parks and providing real options for the families of athletes. I don't know what to make of the corporate side in general, it's not like it deserves any animosity. If a company puts a product out there that people are buying, what's the problem? Between WTC, Rev3, HITS, Challenge, regional and local races, there are lots of options. Ultimately, even if there were NO options, most of us would still swim, bike, and run anyway.


Rank the 3 disciplines from your personal strength to weakness. What is some gear you use for each?

Bike, swim, run, with the bike being my strength. I'm naturally built for riding with rippling, awe-inducing legs of steel, but those same machines make running a little more difficult for me than it is for others with chicken bones and sinew hanging off their hips. It's one of the things I like about triathlon - I put time into the runners on the bike and they put it back into me on the run, so it's fair. Gear-wise, I ride a Quintana Roo CD01, which is a very comfortable and powerful fit for me. I recently switched to an ISM Adamo saddle which has made it even more comfortable. I cruise around on Planet X clinchers, and the rear one was rebuilt for me with a Powertap G3 by a great wrench here in town. I also sport a wheel cover whenever possible with a giant Fisher snowplow decal, so it's easy to spot me in the racks! Swim wise I'm rocking an Xterra Vendetta this year, which I'm really psyched about, and I'll be running in Brooks PureFlows. Lastly, only because doing it nude is a crime, I'll of course be wearing my super chic kit from Triple Threat Triathlon.


Your profile states that you have a "guiding principle to have fun above all else." Do you think most people fall into this camp, or do most take the sport too seriously?

It's hard to say, I'm not an authority. If you look at the online community, the most vocal people occasionally come off as being a little 'dark side of the force', but if I just think about people I meet at races and some of the friends I've made, then the picture is a lot brighter. There's no requirement that triathletes have to have a lot in common, so it's difficult to even say there IS a community. I know life is a lot better when you smile and laugh a lot, so I don't get the people that walk around all stone-faced.


Rumor has it you have "skillz to pay the billz." What do you do all day to pay those billz?

The stuff I get paid for is software development for a financial firm. Work is pretty close to home, so I get to balance everything very well, and I'm really grateful for that. It also goes down as a great job because there's a gym in the building, so I can work out during lunchtime every day.

Tell us about your family, and what's your personal strategy for balancing family, work and training?

I'm a proud father of three young kids and a husband to an amazing wife. Triathlon has had a big effect on the family- since I started, my wife now works out every day and my kids have become really athletic. My oldest son is a freakshow athlete, and he is going to try his first kids triathlon this year, which he is thrilled about. I plan my training around what has the least effect on the family, and it's a gift to be able to fit an hour of running or riding in at work mid day. If it becomes a balancing act that takes any more effort than just simple planning, then training is the first thing cut, which is what happened with Cedar Point.


Connecticut is a little bit like Napoleon... small, yet powerful. What are the pros and cons of being a triathlete in your state?

Ha! I like that. There are a lot of incredible athletes around here and they race often. Just as an example, I've toed the line with Chris Thomas several times, who won USAT Age Group Triathlete of the year last year! He, and several others around here could easily be pros if they wanted to. That puts the bar really high, but it makes me train and race that much harder. The terrain around here has a lot to do with it- there is really no such thing as flat here. I ran a half marathon last year which was uphill literally 70% of the race. My legs felt like angry jello afterwards.