Spencer Woolston: The Strength of 10 Men

Spencer Woolston is an elite age group triathlete who has qualified for the Ironman World Championships in Hawaii the past three years.  He’s most known for his dominance on the bike, where sources tell me the watts he generates during a 1-hour time trial could power the state of Texas for over 45 minutes.  At Ironman St. George this past year, he had the 12th fastest bike split, including pros, despite losing 15 minutes to a flat tire!  He followed that up with an even better 8th fastest 3:07 marathon to finish 10th overall.

Being the tri geek that I am, I crunched some numbers for his Ironman performances, showing times, placing, and % rank vs. the field (as in “top 1%”).

What’s your athletic background, and how did you get into triathlon?
My athletic background is football.  Football was my life obsession as a kid through my senior season in college.  After football I stopped working out and I didn’t do much athletically other than pickup basketball every once in a while till I became a jogger in my late twenties.  I never did any running races till the 2008 St. George marathon, and I loved it.  I raced in the Clydesdale division and was competitive in that classification (editor’s note: I looked it up, 3:00 flat!).  I started thinking after the race that I might be a better cyclist than a runner, so I started looking into Ironman racing.  I never swam as a kid and could barely tread water, but I had just watched the summer Olympics and they raved about Michael Phelps size 14 feet and how they helped him (I also have size 14 feet) so I decided to jump into it.  I signed up for an Ironman, bought my first bike and started getting swimming lessons.

How would you sum up your 2012 season?  What was the highlight/lowlight?

I raced 3 times.  Ironman St George was my best race.  I had my worst swim ever swimming a 1:18, having swum a 1:04 the previous year (editor’s note: high winds made for really tough conditions).  I was really happy with my bike but then disaster struck when I got a flat tire.  I ride tubular tires and since I didn’t bring anything with me to fix the flat, I thought my day was over.  Thankfully, within just a few minutes bike support happened to drive by and they fixed my flat for me.  I only lost 10-15 minutes, so I was very lucky.  I was able to have my best Ironman marathon time, going under 3:08 to finish 10th overall.  When I factor in the bad swim and the flat tire it was by far my best race yet.

My worst race was in Kona at the World Champs.  I came into the race in the best shape, expecting to have my fastest race ever.  My 4000 yard TT’s in the pool were my fastest ever, my 2 hour average watts were higher than ever, and I was running faster than ever, but something was very wrong on race day.  After about 90 minutes on the bike I just didn’t have the energy and I faded to have my worst Ironman time ever.


What’s on your schedule for 2013 and what are your goals?

As of now Ironman St. George 70.3 and Ironman Coeur d’Alene.  I would love to be able to put everything together and be the top amateur at both of these events.  I have been close before but have never done it in an Ironman race.

I am motivated by the thought of doing really, really well in races.  I dream big and a lot of the ideas that push me the hardest are highly unlikely. I can push my body much harder with crazy, grandiose ideas like winning an Ironman.  I have never finished better than 10th overall in an Ironman and the guys who win are beating me by a lot, but the thoughts that push me in training are the thoughts of winning an Ironman.  I know that the likelihood of me ever accomplishing that are very, very slim.  Even though I know logically that I will probably never have the fastest overall time (pros and amateurs) that is what I think about to motivate myself.  I am also motivated by numbers because numbers can represent progress.
I guess the thoughts that motivate me in training are hitting numbers that I have never hit before, so I base my training on hitting numbers like my time in a 4000 yard swim or my average power over 2 hours on the bike, or my time running 10 miles.

You and BJ Christenson are widely considered to be the top two amateur triathletes in the state. He races a lot, whereas you’re more selective.  I see the argument for both approaches… what’s your take on racing less vs. more?

I think it’s just a preference thing.  If you enjoy racing a lot and it fits your life situation then you should do it.  I race less for four main reasons: 1) I have 3 kids and a wife who have stuff going on in their lives and it’s hard to fit in a lot of racing with what our family has going on. 2) I enjoy the process of preparing for the big “A” priority race and trying to knock that one race out of the park.  I’m just not that excited about doing a race just for fun.  3) I am best at the half and full Ironman distances and to race those distances you usually have to travel.  I hate traveling so the thought of flying somewhere to do a race that is not my big priority is disturbing.  4) Almost all of the local races are Olympic distance and because I am a poor swimmer the Olympic distance isn’t great for me. 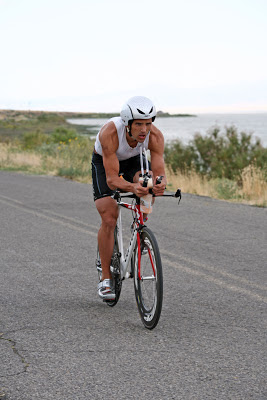 What’s your perspective on the triathlon scene in your home state (Utah)?

It is a great community.  When I first got into the triathlon scene I did not encounter any jerks.  Even though everybody wants to win, everyone is also really friendly as well.  All the fastest guys in the state are also really nice guys.  Heath Thurston has helped me with my swim.  B.J. gave me a pair of shoes.  I’ve never done a cycling race but I am told that the difference between cycling and triathlon is that the tri guys are happy to help and give advice while in cycling it’s a colder culture. I have liked being able to make a ton of new friends through triathlon.

What have you learned from experiences at Kona the past few years?

I have learned that I am really not that great of a triathlete and that I have a lot to improve on if I’m going to be more competitive.


Have you developed any “friendly rivals” from your battles at IMSG, Kona, etc?

I have raced B.J. Christenson 3 times at Ironman St. George, 3 times at Kona and 2 or 3 other small races.  I wish I could consider B.J. a rival, but his record against me is pretty dominant.  He has beaten me almost every time… I have only edged him out twice.  Maybe if I can improve over the next couple years I can gain ‘friendly rival’ status with him.


It’s been rumored that you have the strength of 10 men.  How does your college football background most help you in triathlon?  Does it help specifically with power on the bike?

Ha ha ha… the strength of 10 men and the mind of 1/10th of a man.  When I played football strength always came easy.  My best lift was always the squat.  After football ended I stopped lifting, but when I started riding a bike just before my 32nd birthday the power on the bike came easily as well.  I think that came from the lifting background and from just the way God made me.  The negative part about my body type is that I just can’t get to a more competitive size.  I am 6 feet tall and it’s really hard for me to get under 190 pounds.  I would love to be around 170… I think I could run a lot faster at 170.

What’s one piece of advice you’d give to those new to the sport?

1) Get a good swim coach.  Even though I am still a terrible simmer, I have improved dramatically through swim coaching  2) Train with Power, either a power tap or one of the other power meters.  Being able to track your progress is important in anything you want to be competitive in and the only way to do that with a strong degree of confidence on the bike is with a power meter.

Check out Spencer's blog at   www.spencerwoolston.blogspot.com