Here in Florida we are in one of the two prime time periods (before and after summer) of triathlon racing. So after a successful season debut at a local Olympic distance race where I placed 3rd OA, my next challenge was to tackle my first half-ironman distance race of the season: Ironman 70.3 Florida in Haines City, FL.

This past winter I had a knee injury that kept me off running for a little over 3 months. Originally, it was a bummer since I wanted to work on improving my run, but looking back at the work I did this offseason, that injury may have been a blessing as I was able to work on my swimming (my biggest weakness), biking, and body strength while being consistent with my training without putting too much stress on my body.

Florida 70.3 has a slow swim due to its swim course, a rolling hills bike course, and a challenging run with 3 nice hills at the beginning of each of the 3 loops. Based on the course, my training, and my season goals, this is what I expected to accomplish in this race:

1) Get ready for Chattanooga 70.3, which is my “A” half-ironman this year. By getting ready I mean: test nutrition, SBR intensities, and try to be a little more aggressive without being too worried about the consequences.

2) Overall Time: Break 5 hours. PR (4:55) if possible, but not chase it if not possible risking injury. Breaking 5 hours would show that I am almost where I left off last season, despite my lack of running this offseason.

3) Swim: 35 minutes. I really wasn't too focused on my swim time, since the course design is slow and I didn’t want to get discouraged if my time was slower than expected after working so hard in the offseason. However, I wanted to improve my position in my AG from average MOP (middle of pack) to front MOP or late FOP (front of pack) in my AG. I wouldn't know this data until after the race, so whatever time I exited the water, I would be fine with it.

4) Bike: 2:25 – 2:30. I’ve been working on the bike all off-season and I know I am capable of hitting this time, without compromising my run, despite the rolling hills course that I am not used to riding in Miami.

5) Run: Break 1:40. More than a goal for this race, this is a wish I have for this season. I know I can’t run a sub 1:40 HIM split right now with my lack of running this offseason, but I wanted to try.

The race was Sunday, so we left Miami on Friday afternoon after work, had dinner on the road, and arrived the same night to the house that we were renting with some friends. This was the first time we stayed in a house when going to a race and we loved it. I think that from now on I will look at this option over hotels (cheaper or similar price, have more space, and you truly feel like being at home).

We went to bed a little late, so I didn’t wake up until 8 am on Saturday. I went for a quick run and headed over to the Ironman Village for packet pick-up, attended the athletes meeting, and met with my friend Alex before the practice swim at the Lake. The water felt great (for sure it would not be wetsuit legal), but the course was tricky as it had 6 x 90 degrees turns, which meant that it would be a slow swim, with plenty of people in the way (I was in the 3rd to last wave), and sighting would be key.

After the swim, I headed back home to go for a 20 min bike ride when I discovered that I had a flat on my rear tire… That’s exactly the type of confidence-bummer thing you don’t want to experience before a race, but I changed it quickly and proceeded to do my planned pre-race bike workout. My new tube was holding up well apparently, but it kept me thinking about it the whole day…

After I was done, I went with my wife to have some lunch at a Mexican place. The rest of the afternoon was pretty uneventful: nap, some reading, spending some time with friends and my brother in-law. Before going to have dinner I left all my stuff ready for the race, so I could go to bed quickly after we were back from dinner.

I woke up and had breakfast 3 hours before my race time. Then I drove to the race site, set up transition, and relaxed hanging out with some friends. Lots of people from Miami came to this race and I managed to see and chat with most of the people I knew, which helped keep my nerves down. My AG is usually one of the first waves in most races, so it felt weird having to wait that long (52 minutes after the first wave). I didn’t know what to do and I started to feel a little nervous. I also took advantage of this time to eat a banana and drink a bottle of sports drink.

Finally I hit the water. My AG was broken into two waves, so the start of the swim was quite uneventful; not too many people around compared to other IM branded events I've done before (love the wave start process!). I situated myself in the second row of swimmers, towards the right, and started hard as soon as the horn went off.

400 yards into the swim I started catching people from previous waves, and as soon as I hit the first turn the amount of people increased significantly. Actually, as opposed to other races, the first 400 yards were pretty good, but the rest of the swim was full of bodies and there was quite a bit of contact.

Personally, as the swim progressed I was feeling better and better. My splits confirmed that, as I negative split every single one of the 400 yards I had my watch set up for auto-lap (I didn’t warm up before the swim; I should do it next time). The swim felt short and, as I exited, I felt fresh, ready to tackle the bike, and thinking that I could’ve kept swimming at the same pace or even that I could’ve swum faster. The offseason work is paying off!

The course had some challenging hills for a Miami guy, but I actually enjoy them a lot. This is not the typical flat course you may think you will find in Florida (~1,200 ft of elevation), but the hills were not very difficult either and they broke the boring flat riding I am used to in Miami.

The bike is where I feel most confident and I think I executed a pretty good bike leg. This was my first time racing with a power meter and, honestly, I didn’t pay much attention to it. I raced mostly by feel, except for quick checks when I thought I was going too hard or too soft. At the end of the day, my NP was only 2 watts higher than my target power, but my VI was 1.05 (need to work on keeping it a bit lower).

As usual, I started my nutrition plan in transition, taking a gel before getting on the bike - this was my first race using only Hammer products (gels, perpetuem, and endurolytes) and they work amazingly. No GI issues and I had sustained energy through the entire race - I did a flying mount and there I was ready to go for 56 miles. I caught a guy from the Every Man Jack team after 10 miles and I knew if I stayed with him I would have a good bike time. We passed each other about 3 times during the entire bike leg and I stayed within visual distance when I was behind. That strategy also helped me to stay focused. Since I started in a late wave, I passed a significant number of people during the bike portion, some of which decided to draft off me. This course had plenty of marshalls and I saw them giving at least 5 penalties to people behind me in different parts of the race. Good!

The course was very entertaining with the hills and nice views of Central Florida, so it was over before I knew it. I dialed down the intensity during the last mile; I knew I would break my more optimistic goal time of 2:25 and I was really happy at that point. All the offseason work I put in the pool and on the trainer were paying off on race day in an awesome way. Now I was getting ready for the run, the discipline that I was least ready for… 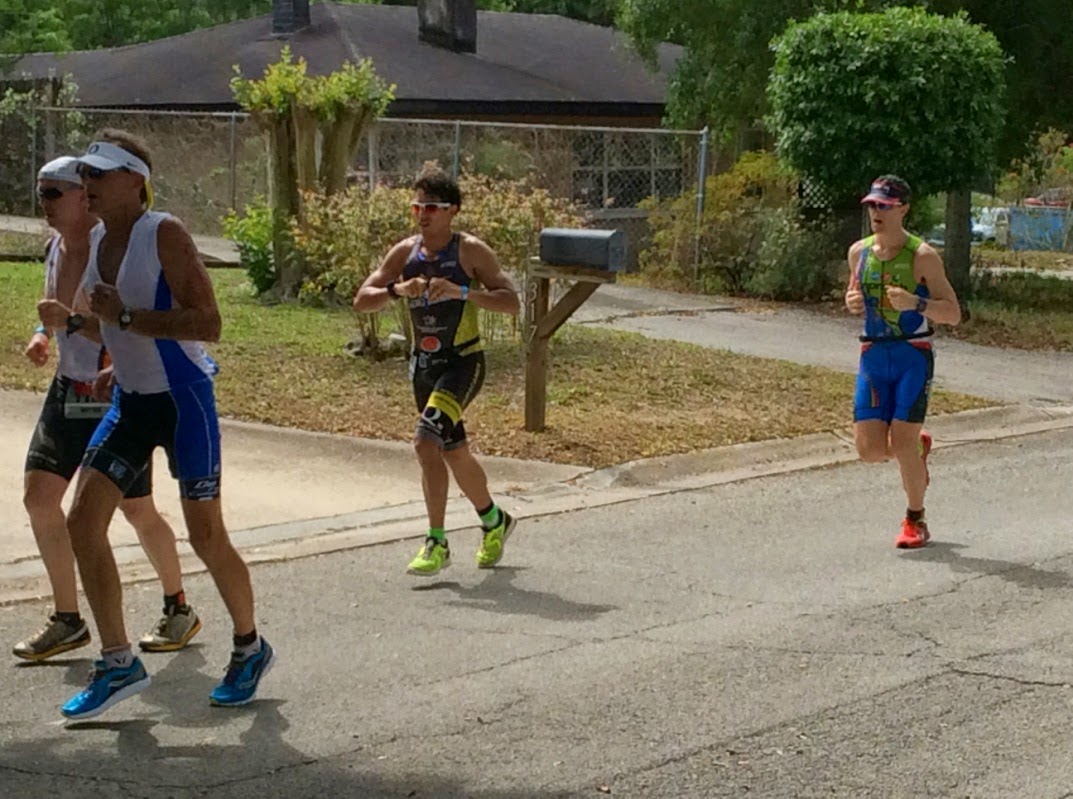 At this point of the race I knew I would break 5 hours, barring a horrific run. So I decided to execute my run plan and not try to chase or stay with people that were on a different running level.

I started pretty well, I was hitting the times I had in mind and I was executing my nutrition plan perfectly. However, at the beginning of the third loop, my lack of running fitness and the heat started to show. I had to slow down a little bit and finished the last 4 miles running at 8:00 – 8:10 min/mile.

That last 4 miles put me out of reaching my goal of breaking 1:40, but it was physically impossible for me to run faster at that point. I was hurting and I knew I didn't have the fitness to go for it yet. However, I was very happy with my run. I ran pain free, my left knee felt fine the entire run, and now I know I can start training to get where I want to be for my next races.

This was probably my best 70.3 race so far (including a 10 minute PR!). I can see that the offseason and early season work is paying off on race day. This was not only my best swim result (% place in my AG), but it also felt effortless and I had plenty of energy for the rest of the race. I was also able to bike at a higher intensity while still having legs for the run. And, even though I haven’t had much time to train my run, my times were very similar to what they were last year.

I can’t wait to see what the rest of this season holds!! Next up: Ironman 70.3 Chattanooga on May 17th and Ironman Boulder on August 2nd. 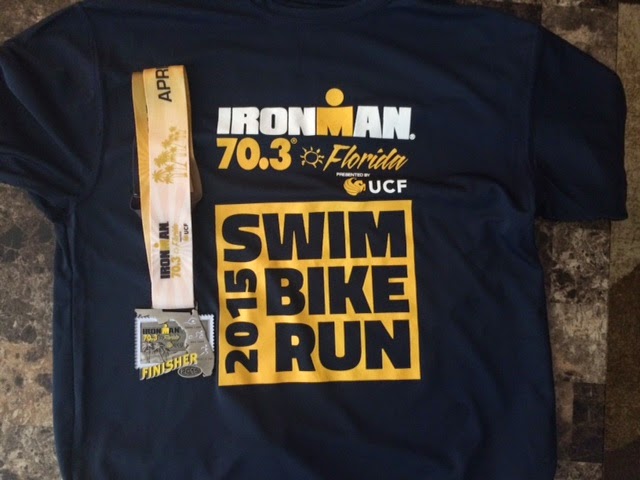