As the Triple Threat Triathlon team page states, 6'5 Jackie "Big Rig" Muterspaugh looks down on his competition both literally and figuratively. He racked up double digit age group victories last season alone, and has competed at the USAT Championships the last two years, placing 12th and 3rd in his division. He's also a great family man, with four kids who can be found competing themselves or assisting as his well-oiled, pre-race "pit crew." Jackie is relatively new to triathlon but has raced a ton and had tremendous success over the past few years... it was great to catch up with him and get his perspective for the blog.

What’s your athletic background, and how did you get into triathlon?

My athletic background was primarily ball sports: football, basketball, volleyball, soccer, etc. Later in life I started racing BMX with my sons and we traveled to national events and won many races. After a long stint playing competitive amateur volleyball both indoors as well as 2 man, I was looking for a new challenge. I got into triathlon out of curiosity, starting with a beginner tri (200m swim, 6 mile bike, 1.5 mile run). I took 2nd overall which included cramping on the run because of a terrible bike fit. That was it, I was instantly hooked, and in 4 years I have completed over 50 tris ranging from sprint to half Ironman distances. Included in that are several half marathons, 4 Ragnar relays, and 20+ 5 and 10k races. 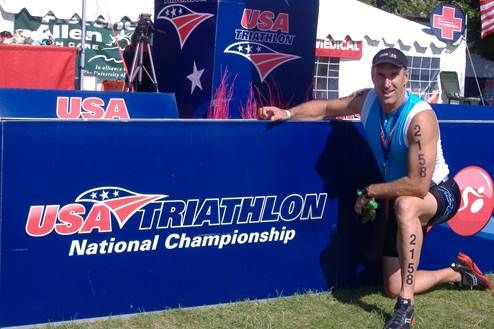 How would you sum up your 2012 season? What was the highlight/lowlight?

2012 was my best season thus far. I did 13 sprint distance races and won my division in 10 of them. The highlight would be winning my age group in a couple races that did not have a Clydesdale division. The low light was on the same day as one of those races, my 12 year old son crashed when he hit a volunteer who ran out on the bike course. We had to go to the ER straight from the race.
How were your experiences at the USAT Championships the past couple years? What did you learn from racing on the national scene?

Humbling is the only word that describes that experience. Racing at the national level is clearly not like local races. The swim is a tight pack the entire way with little separation. The bike is also tight, and it’s tough to manage your drafting space as there are so many equal cyclists. The run is a spectacle of athleticism… so many fast runners. It is the ultimate test of your preparation, training, technique, transitions, and overall race strategies. I cannot say enough about the USAT and the way they put that event on. I felt like a pro at a major race or on the ITU circuit because of the professionalism that the USAT displays. I shaved almost 8 minutes off my 2011 time, so I was thrilled although I finished 12th. I wasn't disappointed because I can only race my best and improving my time that far was as thrilling as finishing 3rd in 2011. I learned that your bike/run combo has to be at a very high level to hang at a national level.

I have done 2 sprints this year and the SoCal Ragnar. My goals are always to race the clock and improve. I am my biggest competition, so I will be doing some repeat races (St. George, Bear Lake, Bountiful, Echo and a few others) and my goal is to better my PR in each of these races. Now that the Clydesdale weight limit is raised 20 pounds I want to podium in my age group 5 times. It is the clock that I chase, so setting PR’s is my focus and the rest will work itself out.

On that note, at 6’5 and just over 200lbs, you’ve absolutely dominated the Clydesdale division over the past few years. From your understanding why did USAT change the division this year and what are your thoughts?

This was a shock to me. I knew that they were considering raising the limit, but the 20 pound increase was a surprise (from 200 to 220lb). Unfortunately that much of a raise eliminates some taller athletes like me. I understand the intent, but I thought the jump of 10% body weight was a big one. I racked up a bunch of awards as a Clydesdale, but I’ve always said I can only race who is there. I’ll continue to race whatever division I am in and will just have to train harder and smoke those little skinny guys!

What are your 3 favorite races on your local scene?


St. George - beautiful scenery and the BBSC group puts on a great race
Bear Lake Mountain Tropic - another BBSC race but the course is wicked fast and flat
Stansbury - like the course and have never lost there
Are there any similarities between BMX racing and triathlon? Has it helped you in terms of racing mentality or otherwise? 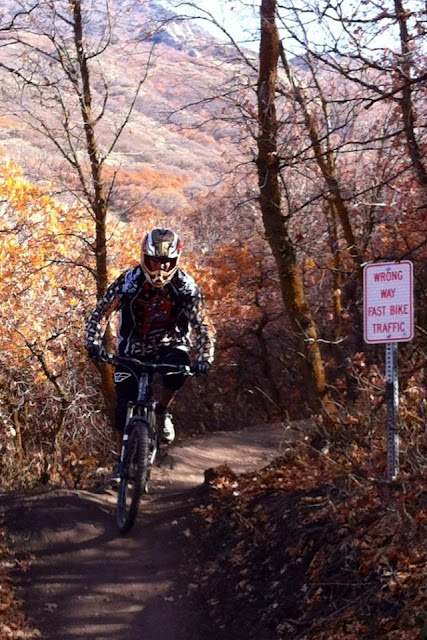 Not really, BMX is more of a max effort for ~30 second sprints. It does help with bike handling skills and explosive power for passing on the bike. The mental side are opposites for me: when I am in the gate to race BMX I am thinking power, explosiveness, destroy, defend… all very aggressive thoughts, whereas for a tri I am constantly trying to stay relaxed and stay in my zone to manage my output.
What motivates you?
Tick tick tick tick tick. Father time, the stop watch and my family. I am passionate about leading by example to my 4 children about living a healthy lifestyle and staying active. I still enjoy playing basketball, mountain biking, running with my kids and other family activities. I want to be able to play with them as well as my grandkids. I see too many guys my age (44) with serious health issues and inactive. I want to compete in some sort of activity until I die. My family is very supportive of my addiction and enjoys coming to races. My wife is a racer too, and I am trying to convince her that in 3 years we should take a vacation and do an Ironman side by side on our 25th wedding anniversary.
What’s your biggest strength and weakness? What has been the biggest key to getting faster each year?
Strength - transitions. I used to analyze corporate processes for a living, so I break down the transition and take out every little thing that is of no value or slows me down. Ask yourself why you have each item in transition and then determine what can go (socks, putting on bike shoes, sunglasses, etc.) For example, I bike and run with no socks, have a shield on my helmet so no sunglasses, and my bike shoes are clipped to bike and positioned with rubber bands to the frame. Bike to run I try to pick up everything and put it on as I leave transition (race belt, hat, glasses).
Weakness - average on the bike and the run. I will have to continue to push my training in these disciplines. I never ran before discovering triathlon, so it has been an evolution to understand how to run fast as a bigger guy.


What advice would you give to those new to the sport?
Do the sport for you and enjoy the journey. Don’t get caught up in the flashy bikes and equipment… borrow a bike, dress comfortably, and give it a go. I always caution new triathletes that this is absolutely addicting, and you need to be prepared for that addiction! There is nothing more fulfilling than picking a goal, training, and then accomplishing that goal. It is not all about Ironman. You are a triathlete if you do beginner, sprint, Olympic, half, or full Ironman distances, so don’t discount your achievements. HAVE FUN, talk to people, help your fellow competitors if you see someone struggling in setting up transition or out on the course. Help and encourage others and it will fuel your race and experience.


Thanks for the time, Jackie, and best of luck at your race this weekend and beyond!