As I wrote about in my St. George 70.3 race report, I had the chance to meet some pros a couple days before the race. Everyone I met was great, and I thought I'd share one thing I took away from each of them.

Andy Potts was a 2004 Olympian who still dabbles with short-course racing despite a focus on Ironman and Ironman 70.3 for several years now. He's among the best in the world, winning races on a regular basis. You could immediately tell that he loves his job and loves racing. He was genuinely stoked to be there, just like all of us age groupers. He mentioned how great the “vibe” is before races and how he loves meeting other triathletes. I asked him, “so is this a big race for you?” He said “they’re all big, but yeah I really want to do well here." Andy had a race best 22:40 swim, 8th fastest 2:11 bike and 6th fastest 1:17 run to finish 3rd in 3:54:21.

Matty Reed’s story is very similar to Potts, and they’ve had many battles over the years (see above video for one example). Last year I was cheering my wife on at Ironman Boise 70.3 on a miserably cold and rainy day. Matty rode the shortened 15 mile bike portion in his wetsuit and went on to win the 1.2/15/13.1 race. I asked him about that, and he said “taking my wetsuit off in T2 was very ‘freeing’, and I felt great in the first few miles of the run. I think it really helped me. It took other guys a few miles to warm up.” Reed had an 11th fastest 23:23 swim, 10th fastest 2:11 bike and 13th fastest 1:19 run to finish 6th in 3:56:58.

My takeaway: have a plan, but be willing to adapt on race day

Leanda Cave is the defending Ironman and Ironman 70.3 World Champion, pulling off the improbable “double” in 2012. I commented on her celebrity status after that accomplishment and she said “I don’t think that I am!” Leanda had a 7th fastest 25:48 swim, 8th fastest 2:29 bike and 15th fastest 1:31 run to finish 10th in 4:29:04. She expressed some disappointment in this race report.

My takeaway: it’s normal to have “off” days every now and then... everyone does


Kelly Williamson has been winning races for years now, but really burst onto the scene in 2012, winning the US 70.3 Championships in Texas and placing 2nd at the Ironman 70.3 World Championship in Vegas. She was really cool and down to earth, mentioning that she was feeling some pressure going into 2013 after a very successful 2012. She said she wants to “be on,” for every race, but the reality is that some races go better than others. She’s an incredible runner and acknowledged how hard she’s been working on the bike. Kelly had a 6th fastest 25:00 swim, 17th fastest 2:34 bike and a race best 1:21 run to finish 5th in 4:23.

My takeaway: everyone has strengths and weaknesses... it's natural to focus on your weaknesses, but don’t forget your strengths! 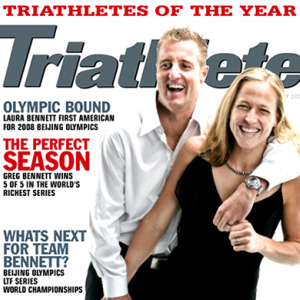 Greg & Laura Bennett are a rock star husband/wife duo who have been dominant for many years. They’re both former Olympians (Greg for Australia in '04 and Laura for the US in '08 and '12) and have won huge races. I’m hardly ever nervous to talk to anyone... I feel like even celebrities a la Queen Elizabeth or William Hung are still “just people.” That said, for some reason I was a little nervous to approach the Bennetts. I’m glad I did, because they were both simply awesome.

My takeaway: don’t be a coward!

Ben Hoffman won Ironman St. George and Wisconsin last year in addition to a past win at IM Lake Placid. I told him I finished hours and hours after him last year, and his response was, “but you finished, and that was a very tough day.” Regarding the race at hand, he commented on it being a deep field, but he came across as someone who’s motivated by competition and not intimidated. Ben didn’t have his best result, but I was really impressed by his quiet confidence. He had a 24:21 swim, 2:13 bike and 1:18 run to finish 12th in 3:58:57.

My takeaway: aim high and don’t be intimidated. One of his quotes was “that’s why they call it a race”

Craig Alexander is a stud. I recounted how I met him post-race at Ironman Boise 70.3 in 2009. That day he was asking me about my race as if I was a fellow pro. After the fact I learned that he had won the race, beating Chris Lieto in a sprint finish. While talking to me then he gave no indication that he had won, let alone in such dramatic fashion. In fact, I remember assuming he must not have had a good race. He appreciated the story and commented that everyone's race is important, not just the pros. Crowie didn’t race but was there as a representative for Ironman. 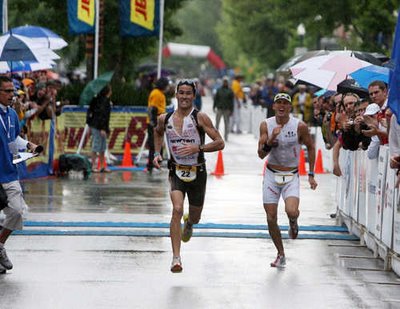 Side note: I also met Ironman legend Paula Newby-Fraser, who won 8 Ironman championships in her day. She recently began coaching former Pittsburgh Steeler Hines Ward. She said he’s lost 20 lbs. and claims to be in the best overall shape of his life. I laughed as she described him as a “little needy,” but also said he’s been "wonderful to work with and very coachable."