Along with planking, the Twilight series, and Justin Bieber, the concept of a “man cave” seems to have grown in popularity over the last few years.  While I’m a bit dumbfounded by most of that list, I totally get having a food and beverage-stocked, comfortable oasis with a massive plasma screen for watching sports.  I get that.  I’m jealous of these guys.  My football-watching experience this year consists of clearing enough toys off the carpet to create a space close enough to the tv to see the score and who’s playing.  The couch is much more comfortable, but you run the risk of people calling you squints after a while.  Not ideal.  All that said, while a man cave would be nice, I don’t think I’d trade it for the lovely “pain cave” that my wife and I have crafted with care in our storage room.  I can picture many of you nodding in approval right now, but for the uninformed and/or our lucky warm-weather friends, the pain cave is a little nook of your house, often in a basement, laundry room, or other dingy establishment, in which you train during the winter.  It is also at times used to describe a more figurative place, describing the zone one enters during a tough training session or race.  In both cases, it is to the triathlete what hibernation is to the grizzly, although in place of sleeping and snoring you sweat and suffer.  It’s great!  While until recently the weather was  quite pleasant in our neck of the woods, I've officially made the switch from the streets to the cave, primarily due to shorter days.  Although I miss biking outdoors, It's been fun to hop back on the old kurt kinetic and catch up on a few shows (my current fav is Revolution, by the way).


Below are the three keys to “setting the mood” in your pain cave:

1) You must have the proper set-up to watch something entertaining while you ride.  This is a no-brainer, and cannot be stressed enough.  The goal is to gain fitness, not lose sanity.  Whether it’s seasons of shows, sports, Spinervals dvds, or even the Twilight series, this is a must.

2) Motivational stuff – our cave is filled with race posters, medals, course maps, goals printed out, etc.  As much as possible, you wanna be able to walk in your cave and be like “let’s do this!!”


Below is a pic of our cave... If you've got one of your own,  send us a pic!  We’d love to see your winter dwellings. 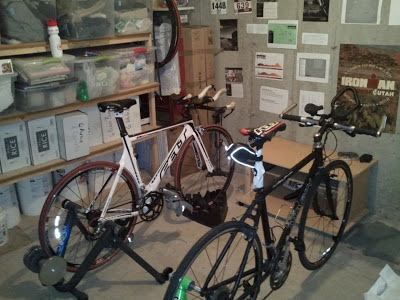