I wrote this race report from Ironman St. George a while ago but thought I'd post to the Triple Threat blog... I'll break it down into two pieces to cut down on the length.

The week of Ironman my wife and two kids were sick.  Like puking sick.  In fact, I think it was Monday night that I was scrubbing beans and rice out of our carpet at 1:00 in the morning thinking “this was NOT in my training plan.”   Besides that all-too-close of an encounter, I tried to keep some distance, and washed my hands an average of 972 times a day.  I used my usual checklist in packing/preparing for a race, which made the process less stressful than it could have been.  I got my bike, Francesca, back from her tune-up and placed her in the back seat with care.   Man she looked good.  I hit the road Thursday, and really enjoyed the drive down.  There was no turning back now. 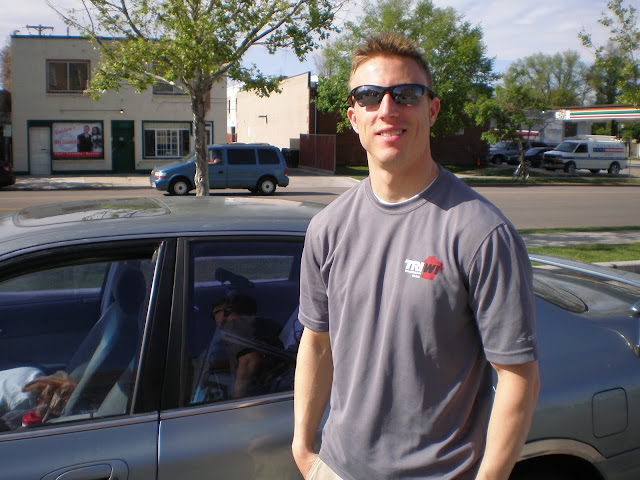 I got in, checked in, and felt the palpable, pre-race buzz in the air.  Since I had a few options, I then had to decide once and for all where to stay.   My grandparents are among the many "snowbirds" known to frequent the St. George area, meaning they have a home there to escape to when Old Man Winter rears his ugly head.  I had planned on my buddy Russell staying with me, but his parents made the trip out from the east coast and he’d be staying with them.  So this left me with a choice: stay by myself and risk something tragic happening like sleeping in on race day, stay with my in-laws in the same house as my cute but sick kids, or stay with my parents/siblings, who I envisioned would be burning the midnight oil playing Yahtzee.  You know, that game where you shake 50 dice in a cup for every turn?  Needless to say, I decided to be anti-social.  I met up with Russell, our buddy Chris, and a co-worker of theirs for the pre-race dinner, which many people complained about but I thought was pretty good.  Russell and I made stupid jokes like “what would the reaction be if they had Denny’s cater the dinner” and overall had a great time. 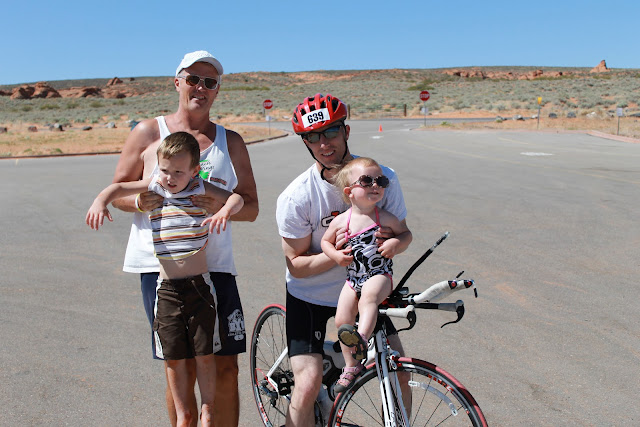 Friday I took a dip in Sand Hollow, almost directly across from the race swim start, while my wife, kids, and father-in-law hung out at a little beach area.  Russell mentioned that the water had been a bit choppy earlier in the day, but by the time I got in it was perfect.  So peaceful.  I played with my kids for a while, letting them push me in off the wooden harbor and holding Shae just above the water before biking the few minutes back to transition.  I generally try to avoid messing with my tires the morning of a race, so I pumped them up and left Francesca in her stable ready to roll.  However, as I drove back, Russell called me, saying he was back at transition and Ironman officials were advising people to let some air out due to tires exploding in the heat.  I reluctantly obliged. 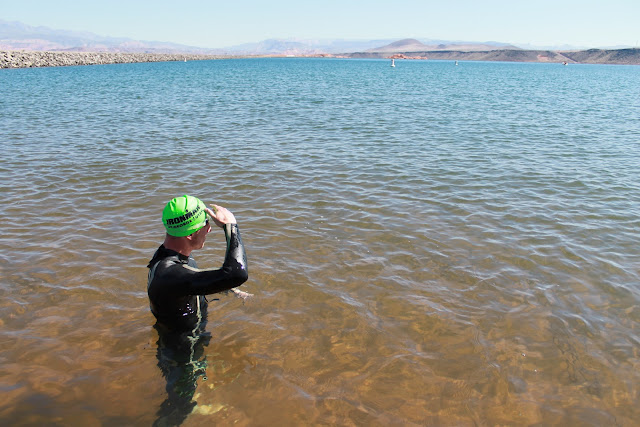 Friday afternoon my parents, sister, brother and their spouses arrived, and we went downtown to watch my son and a sea of hundreds of other green-shirt wearing Ironkids grind out a 200 meter run.  He was a game-time decision, but like Jordan in the ’97 Finals, he gutted it out.  I didn’t say he looked happy.  I then opted for a spaghetti dinner with the fam, where we had some good laughs and talked about the course, logistics, etc.  As we split for the night, I could feel the adrenaline already coursing through my veins.  I got back to my crib, set 3 alarms, and tried to unwind by watching some of a Lakers/Nuggets playoff game.  I could tell that trying to sleep right away would be a futile endeavor.  I climbed into bed around 9:30 and slept more than I thought I would, but still pretty restless.  Gametime was just hours away. 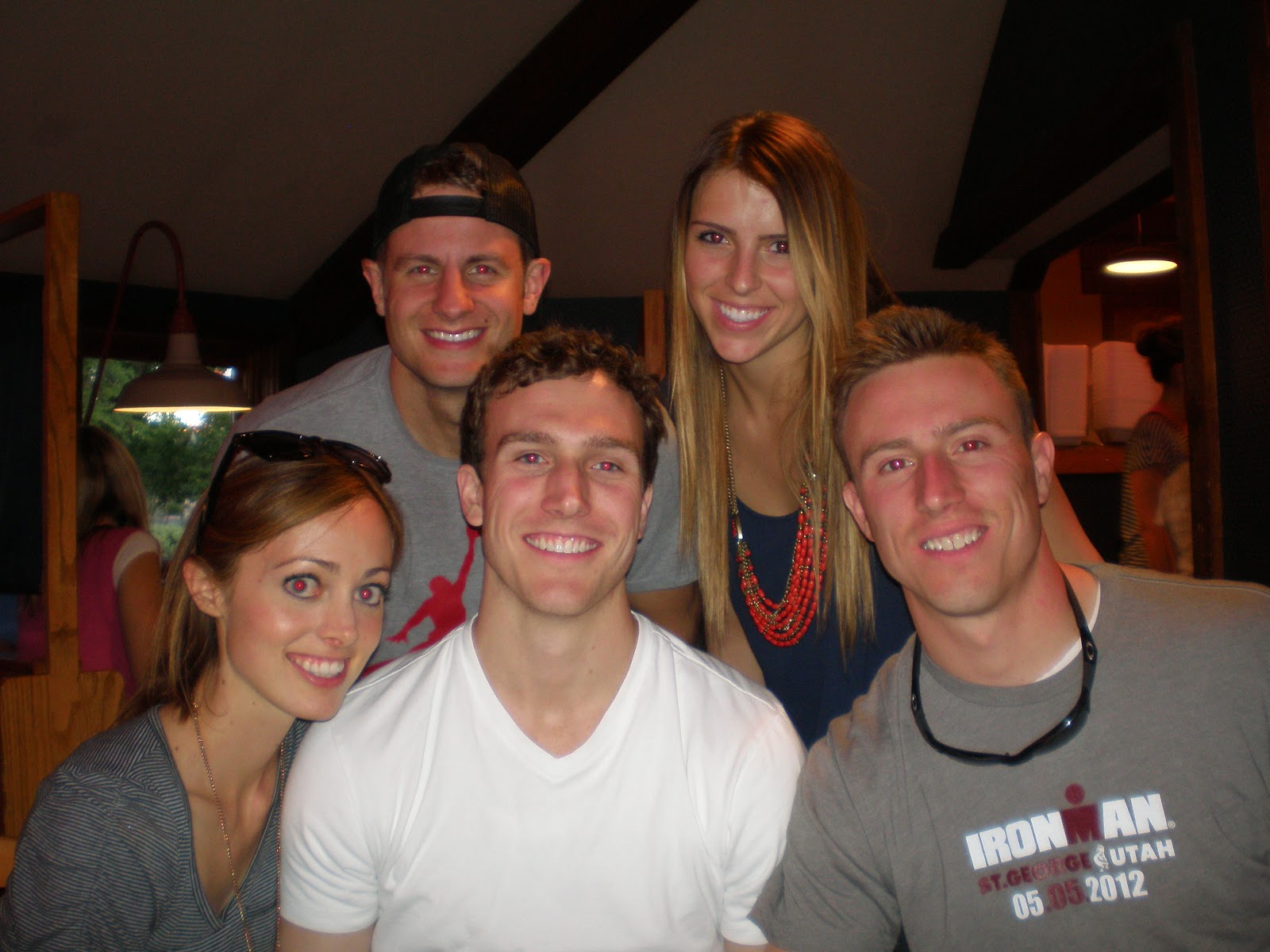 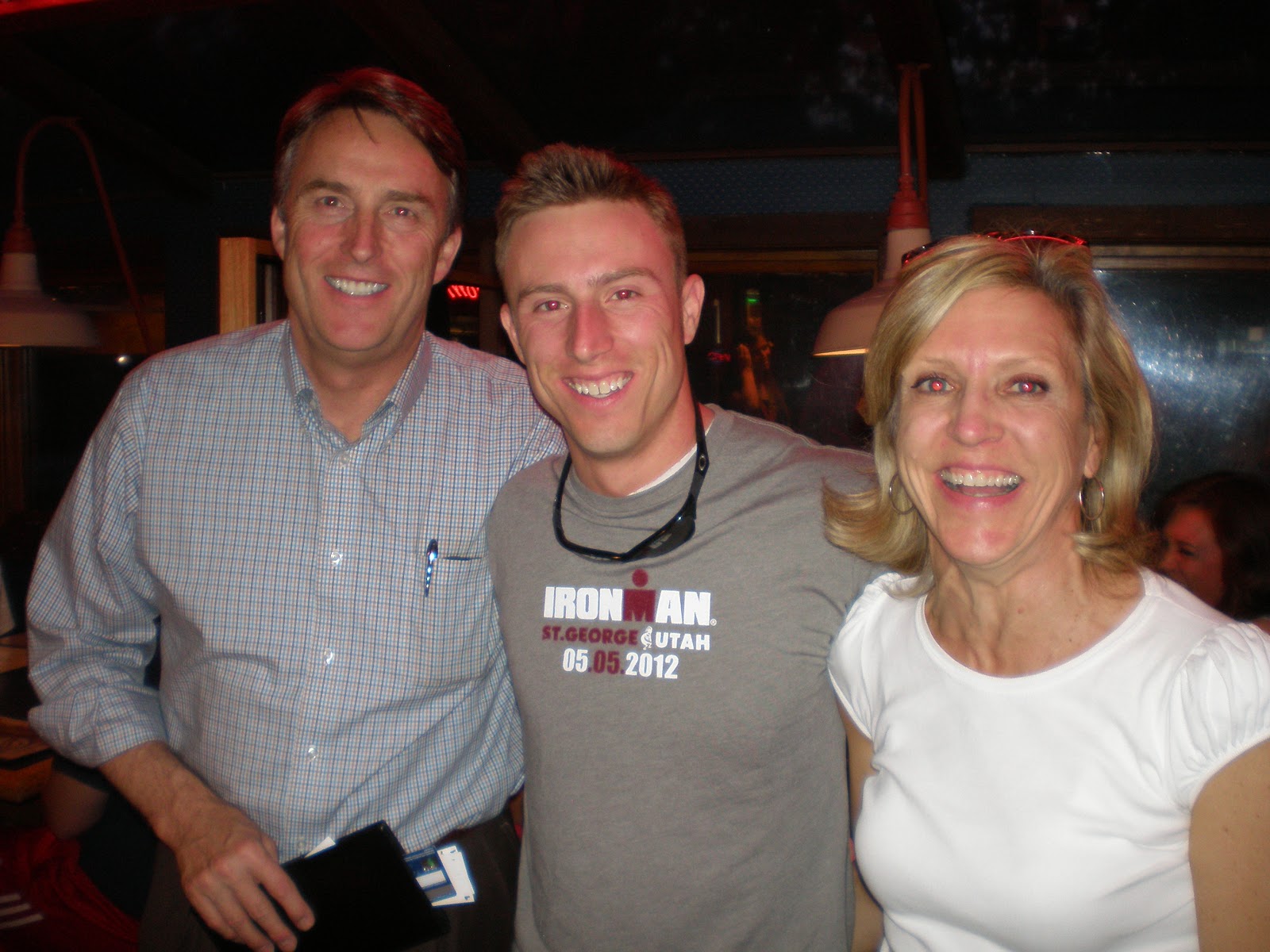