Around 4:00 my alarms broke into song, welcoming the arrival of the big day.  I took a “wake-up” shower, ate my peanut butter bagel, powerbar and banana, grabbed my stuff, and was out the door.  I parked close to T2 and made my way towards the busses, meeting two guys from England and Argentina along the way.  Amazing how international Ironman has become.  The British guy mentioned he chose St. George because of its reputation for being such a challenging course (in hindsight I'd say he got what he came for).  The 30 min, pitch-black drive to Sand Hollow Reservoir seemed to take forever, but an oasis of bright lights finally appeared on the horizon.  I was of course a little nervous, but way more excited as I got ready in transition. 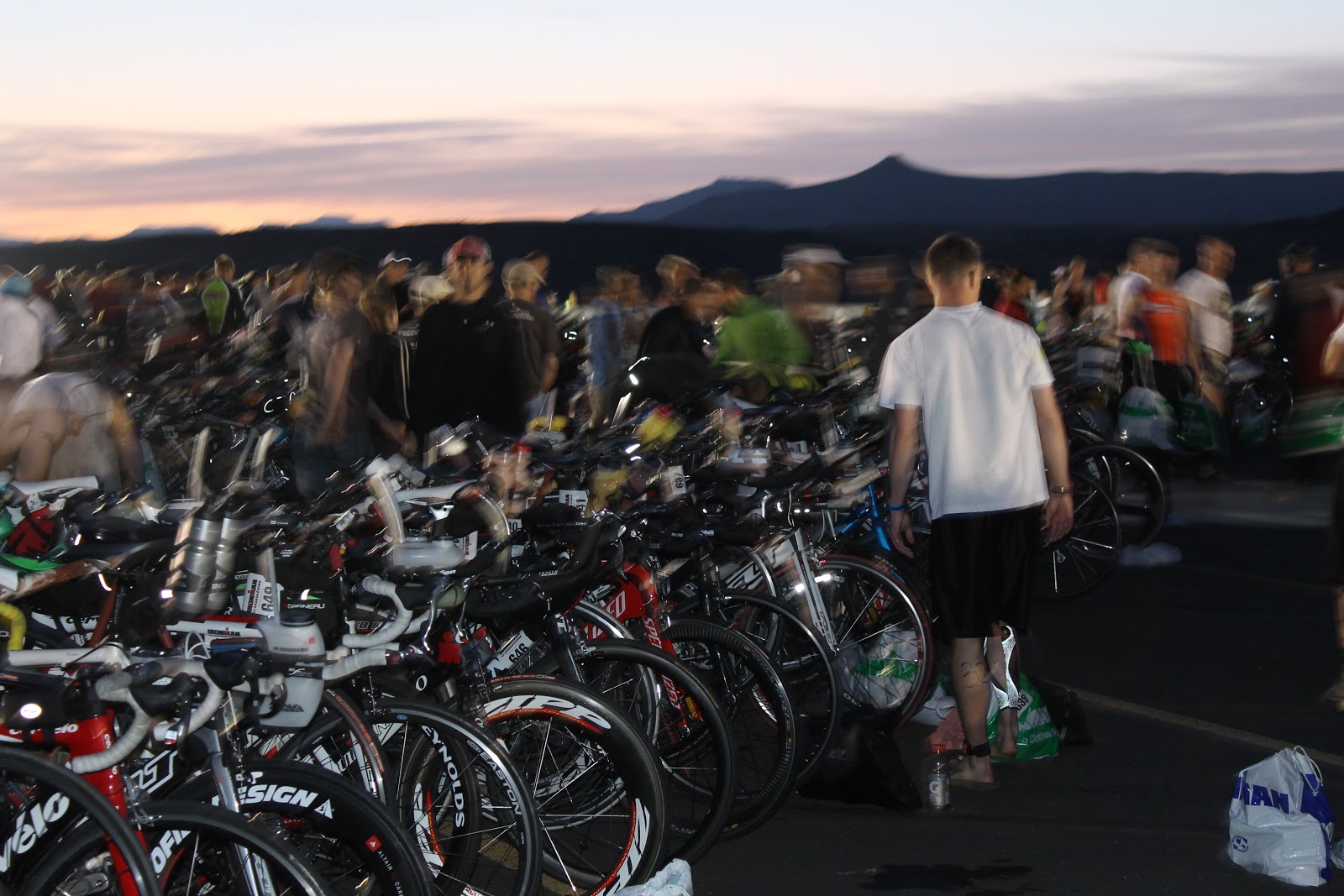 The forecast called for lower than average temperatures and light winds.  Perfect.  Russell and I chatted with our families before slowly heading towards the water like a herd of sea lions being led to the slaughter. 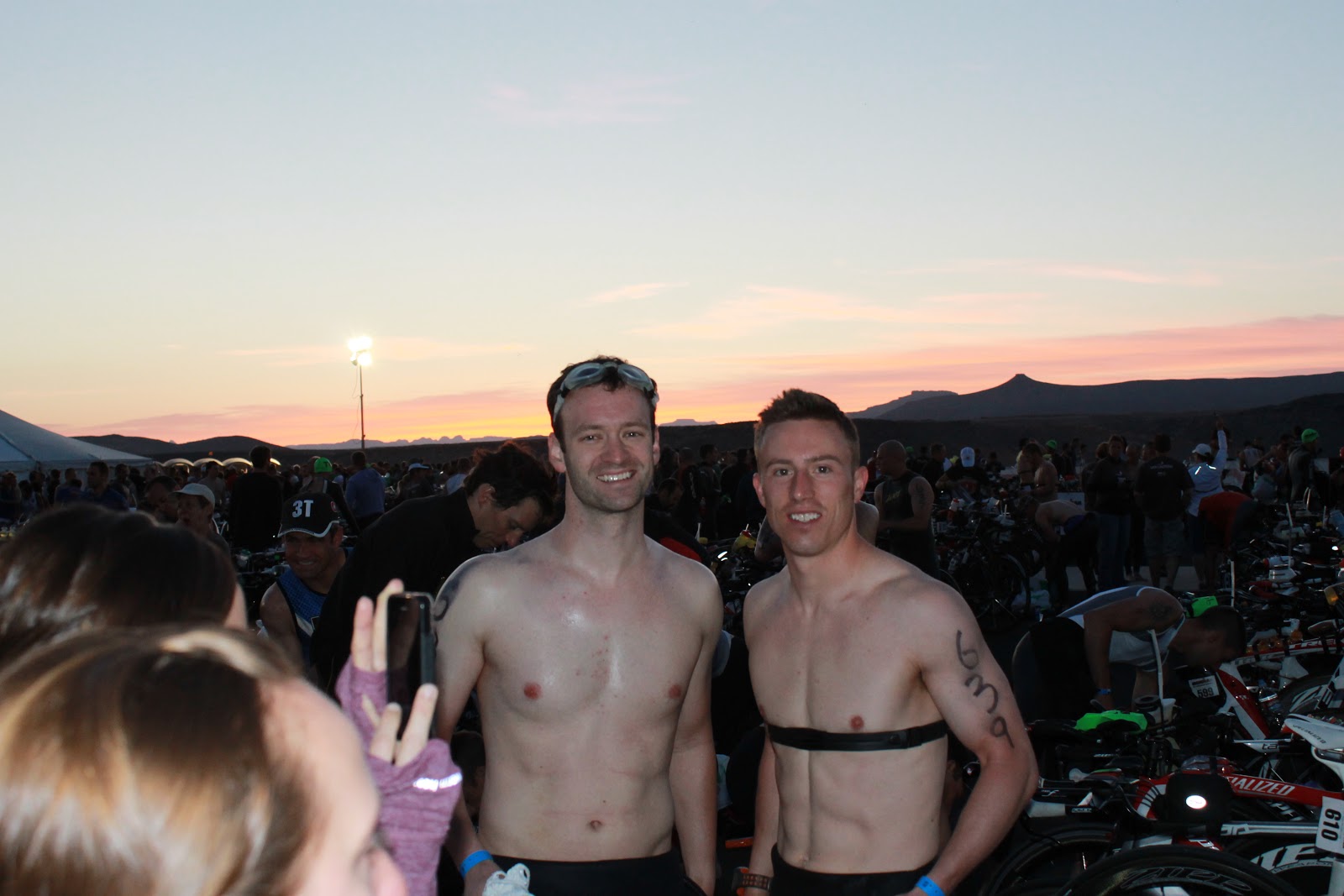 The water felt great… a little cool, but not cold, and smooth as butter.  I positioned myself towards the right and treaded water, feeling relatively calm but ready to rock.  Finally, the gun went off.  This was it!  We headed out towards the first red turn buoy, and I was surprised by how little contact there was.  Sure, there was a little jostling, but I’d experienced much worse. 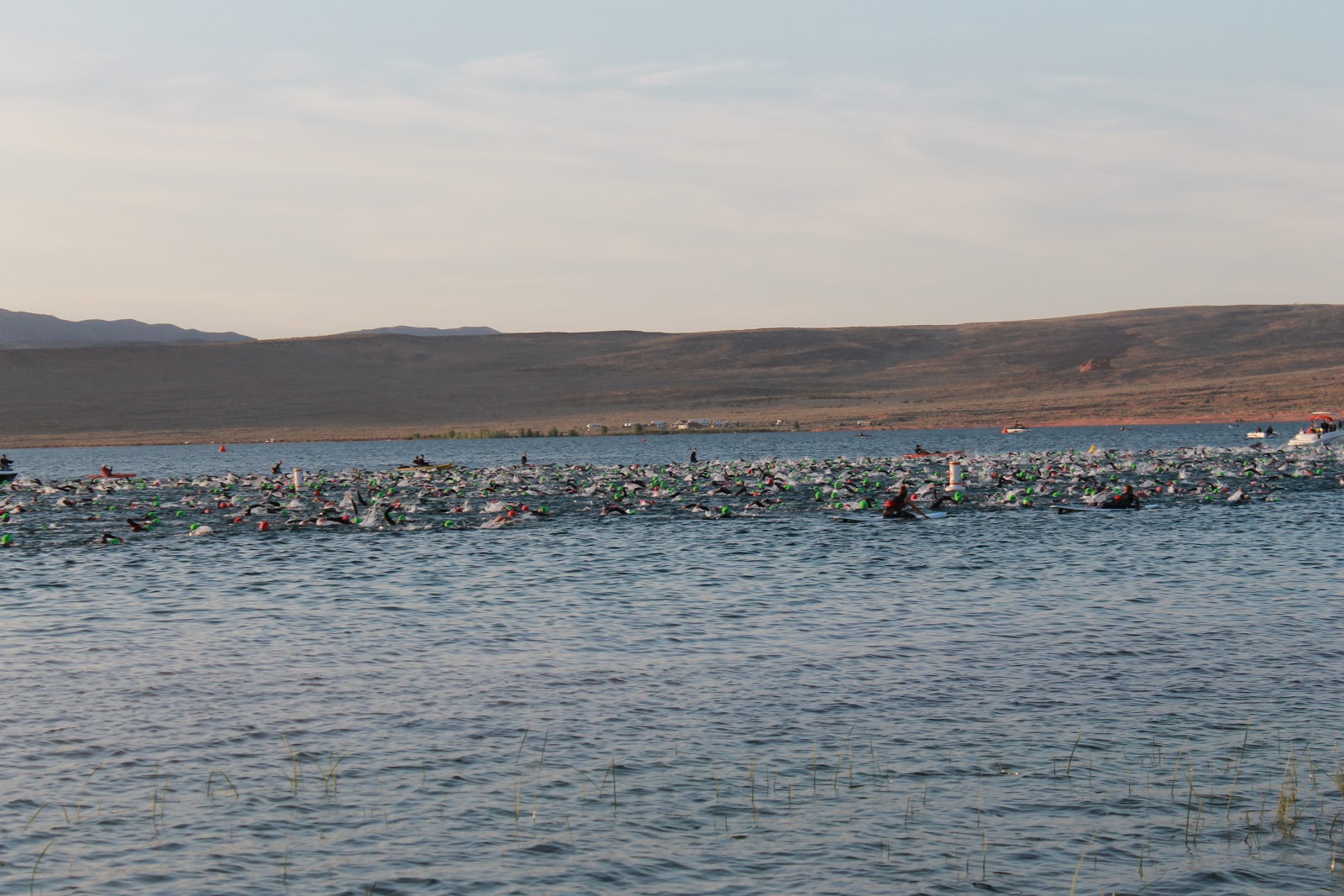 In other races I pretty much redline the swim, but with this being my first Ironman I had decided to take a notch off the intensity.  I was comfortable and feeling great.  In what felt like no time I hit the first turn buoy and made a left.  My immediate next thought was “what the hell?!?”  What had felt like water skiing conditions only moments before had turned to big, rolling waves pushing us to the right.  Was this some kind of Ironman trick?  I prefer breathing to my left, but after a few mouthfuls of water I switched to my right.  This stretch until the next turn buoy was short, and it didn’t take long to realize we’d have to turn directly into the teeth of these waves for 1.5 miles or so.  I made the turn and was immediately blown backwards.

The waves were nasty, with what by all accounts were 4-5 foot swells, and getting worse by the minute.  The white caps caused by the ~40 mph winds added to the degree of difficulty, spraying so hard in your face it felt like it was pouring rain.  I switched to breaststroke and tried to assess the situation, as braver people than me attempted to plow ahead.  They weren’t going anywhere, and I wondered for a moment if it was physically possible to defeat Mother Nature at this game.  It was all just so, unbelievable... like a weird dream.  In fact, was I dreaming?  Everyone was quickly getting scattered, but I turned to the guy closest to me and yelled “this is crazy!!!”  He concurred.  Ok, not a dream.  I quickly learned that if there was an answer, breaststroke was not it.  With my face pointing directly at the onslaught, I was swallowing water and at the mercy of the waves.  I forged ahead the best I could swimming normal, and after a few minutes what was initially terrifying suddenly struck me as being really funny.  Probably just a defense mechanism of some kind kicking in, but it made all the difference from that point forward.  In fact, at times I was literally laughing in the water, and it really calmed me down.  I stayed with this mentality and trudged along, attempting to stay on course by sighting the big rock formation I knew we’d have to eventually turn around.  Many people later reported stories involving boats, kayaks, people clinging to buoys, etc.  Strangely, I never saw a single yellow buoy that was supposed to line the path, nor did I see any boats, kayaks, or even many other swimmers.  Thankfully we had that island, but even something that big was hazy at best.  As I approached the island I noticed what appeared to be two beached sea lions catching their breath on a small rock formation jutting out of the water.  I climbed up as well, hoping to catch a glimpse of the last turn buoy.

“This is crazy!!!”   I once again astutely observed

Even on that rock it wasn’t easy to find the buoy, partially because it wasn't where we were looking.  The wind had blown it out of position and it was nestled up against the island, getting thrashed in the waves.

(Sea Lion 2, looking defeated) “you guys go ahead, I need another minute”

Before jumping back in I looked around.  Once again, I don’t remember seeing any boats, buoys, or swimmers… I just remember how fast the water was moving and the howl of the wind.  It was surreal.  I jumped back in and was ready to finish this beast off.  I was getting cold and was ready to be done.  I made my way to the boat ramp and saw my family.  “Where did that come from?!?”  I yelled.  I looked at my watch as I jogged through transition.  1:45.  Wow. 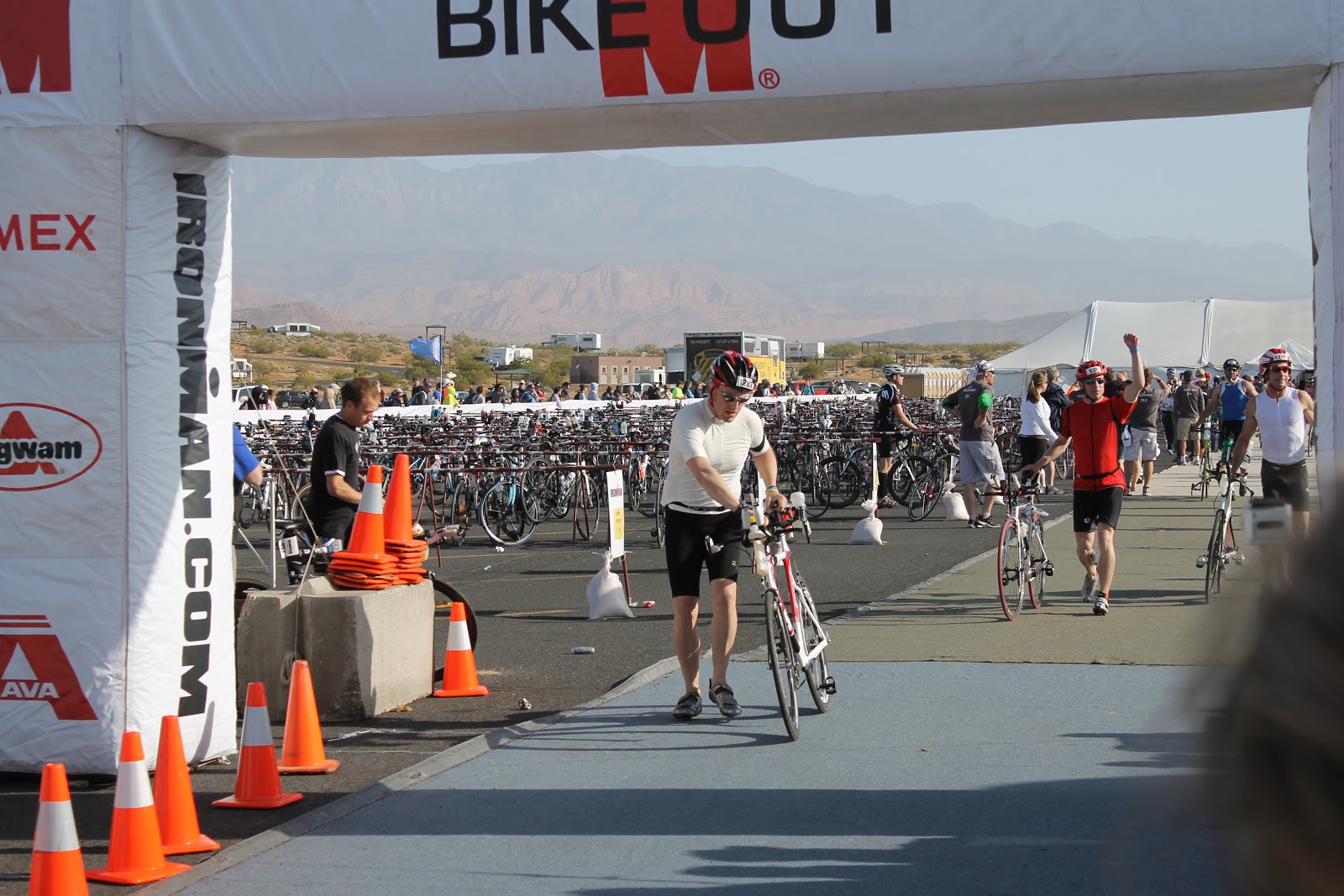 T1 was relatively uneventful, despite the changing tent looking like a war room.  I waved to my family, hopped on my bike and was off.  The stretch from Sand Hollow to the main road was slow, and I cursed at Mother Nature for treating us this way.  So disrespectful.  My friend and Triple Threat team member Jackie Muterspaugh yelled out at me as I made the first turn, and I hoped the winds would die down.  The next 10 miles or so were really fun.  My plan was to ride conservatively, implementing the JRA “just ride along” strategy for the first 50 miles or so.  I chatted with other competitors, and we all enjoyed a reprieve from the wind as we came through town.  The right turn onto the old highway was a turn for the worse, however, as we were once again exposed to the elements.  The next 25 miles or so were incredibly tough.  Battling hills + wind + trying to ride conservatively = barely moving.  A guy went by and exclaimed “that was literally the slowest 40 miles of my life.”  As I rode passed the Gunlock reservoir I noticed big waves and white caps on it as well.  Somewhere around this time I overheard some guys talking about the mile 66 bike cut-off.  I hadn’t even considered that I’d be up against a cut-off, and didn’t pay much attention to the details from the Ironman dinner or in the race guide.  That said, I thought I remembered it being around 1:00, and after doing some math in my head I had a few minutes of panic.  This is not how this day was supposed to go.  I decided that I simply wouldn’t stop if they tried to make me.  I might miss some silly intermediate cut-off, but I knew I could finish in time, whether or not I was an official finisher.  We made the almost 180 degree turn at the base of “The Wall,” and now could finally enjoy a tailwind.  This infamous, long, nasty climb felt amazingly easy with the wind at our backs.  Nervous now about the cut-off, I hammered down highway 18, touching 50 mph on the descents. 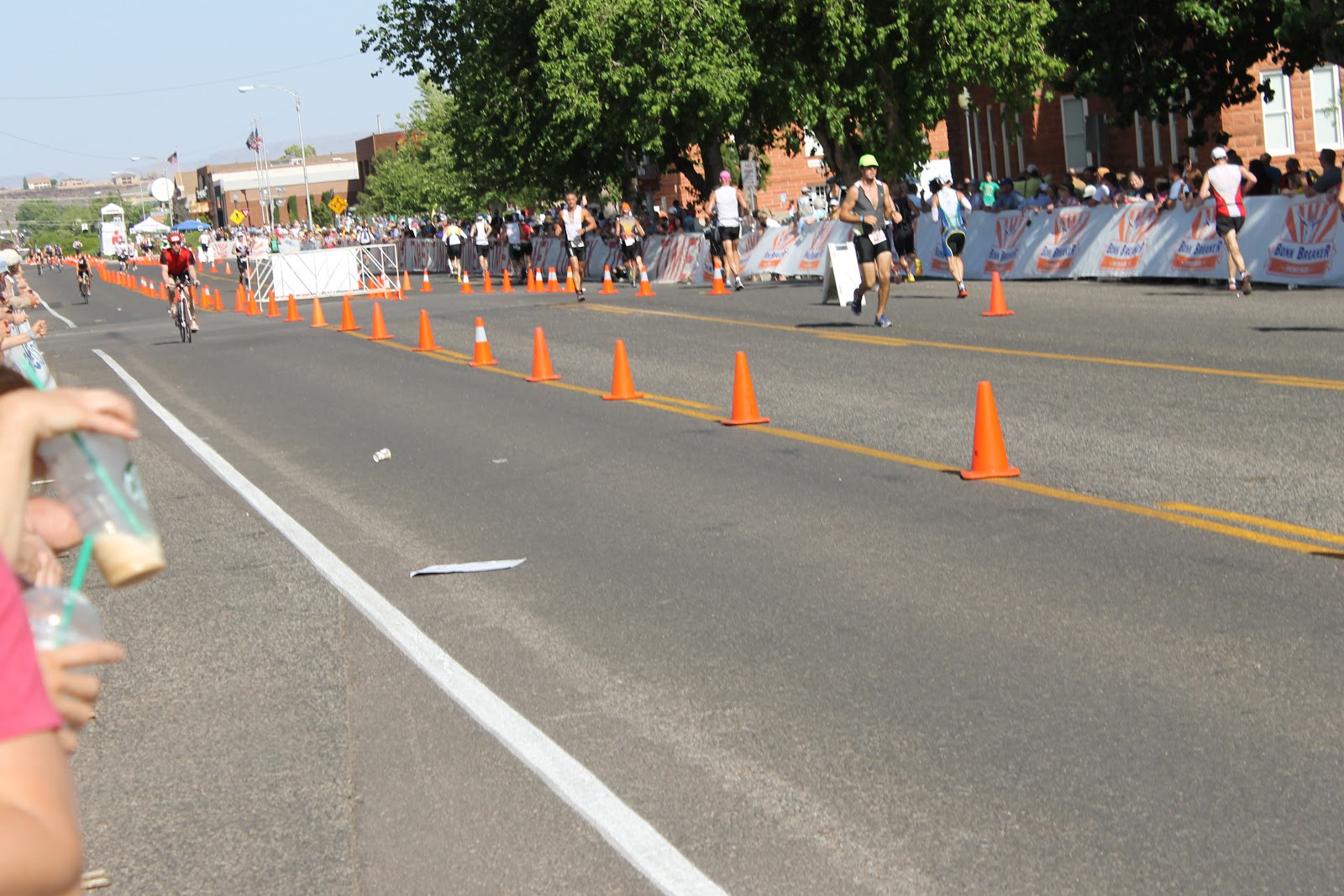 Somewhere during this stretch I learned that the cut-off was later than I had remembered, and I calculated that barring a flat I should be ok.  I stopped for my special needs bag and grabbed my Hammer Perpetuem refills, but waited to fill up until I knew I was in the clear.  I approached the mile 66 checkpoint with ~15 min to spare, stopping just short of the timing mat upon seeing my wife Lindsay.  She had been out waiting for me a long time, while being sick, so the least I could do was stop and thank her for the support.  I refilled my Speedfil as we briefly chatted, and was soon on my way, crossing the timing mat and living to ride another loop.  I was cautiously optimistic at this point, knowing I had some reserves in the tank and feeling some euphoria from having made the cut-off.  I braced myself for the hills, and focused on taking just one climb at a time.  The wind had dropped ever so slightly, and I wasn’t complaining.  It was still steady, but the absence of white caps on Gunlock reservoir was a good sign.  Climbing The Wall the second time was a lot tougher, but eventually I hit highway 18 again and was in the homestretch.  It was a laughably slow time, but at least I had negative split the thing and made it in time.  8:05.  Brutal. 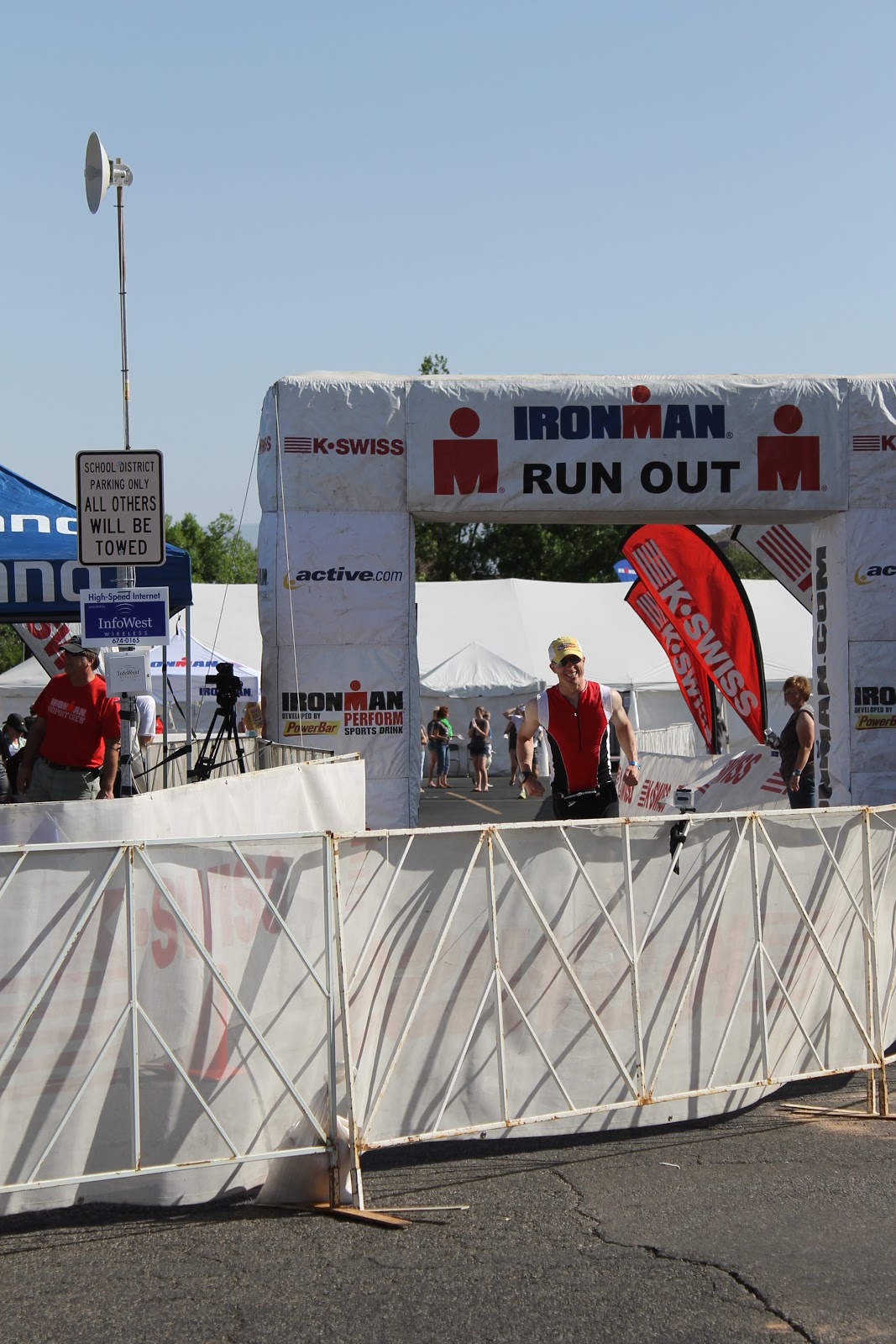 I took my time in T2, giving myself a minute to sit down and slather myself in sunscreen.  I emerged from the changing tent, saw my fam, and let out a primal yell.  “Let’s do this!!”   I was pumped.  Despite very limited run training in the months leading up due to a calf injury, I was confident I’d finish in time.  After all, running is my strength, and I set out hoping to run a ~4hr marathon.  After so long on the bike, it felt great to be on my feet and also feel the camaraderie of the runners around me.  I felt relatively good on the first loop, but my pace was slower than I had hoped.  At mile 8 I had to briefly walk, which wasn’t a great sign of things to come.  I eventually had to succumb to walking some of the inclines and running flats/declines. 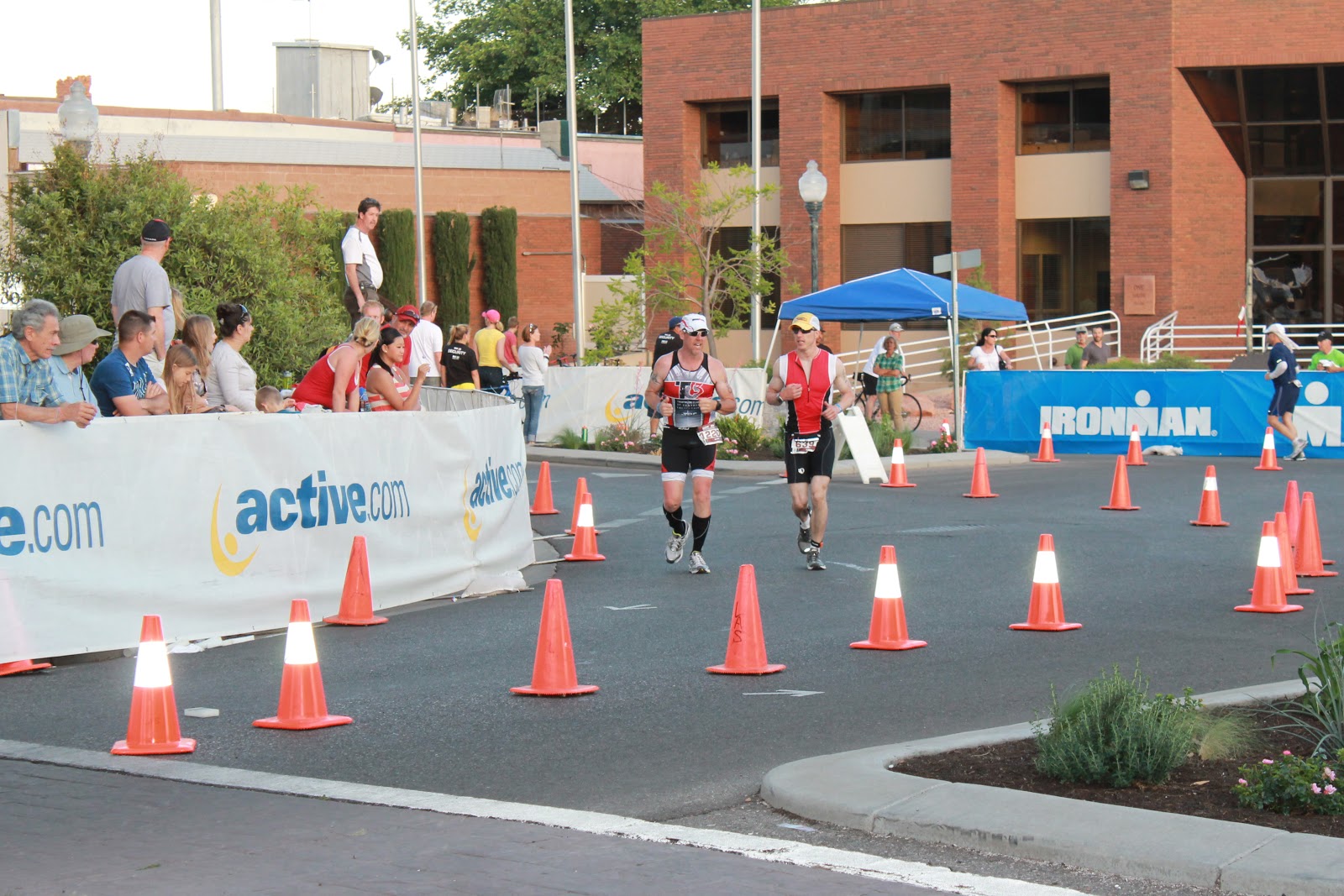 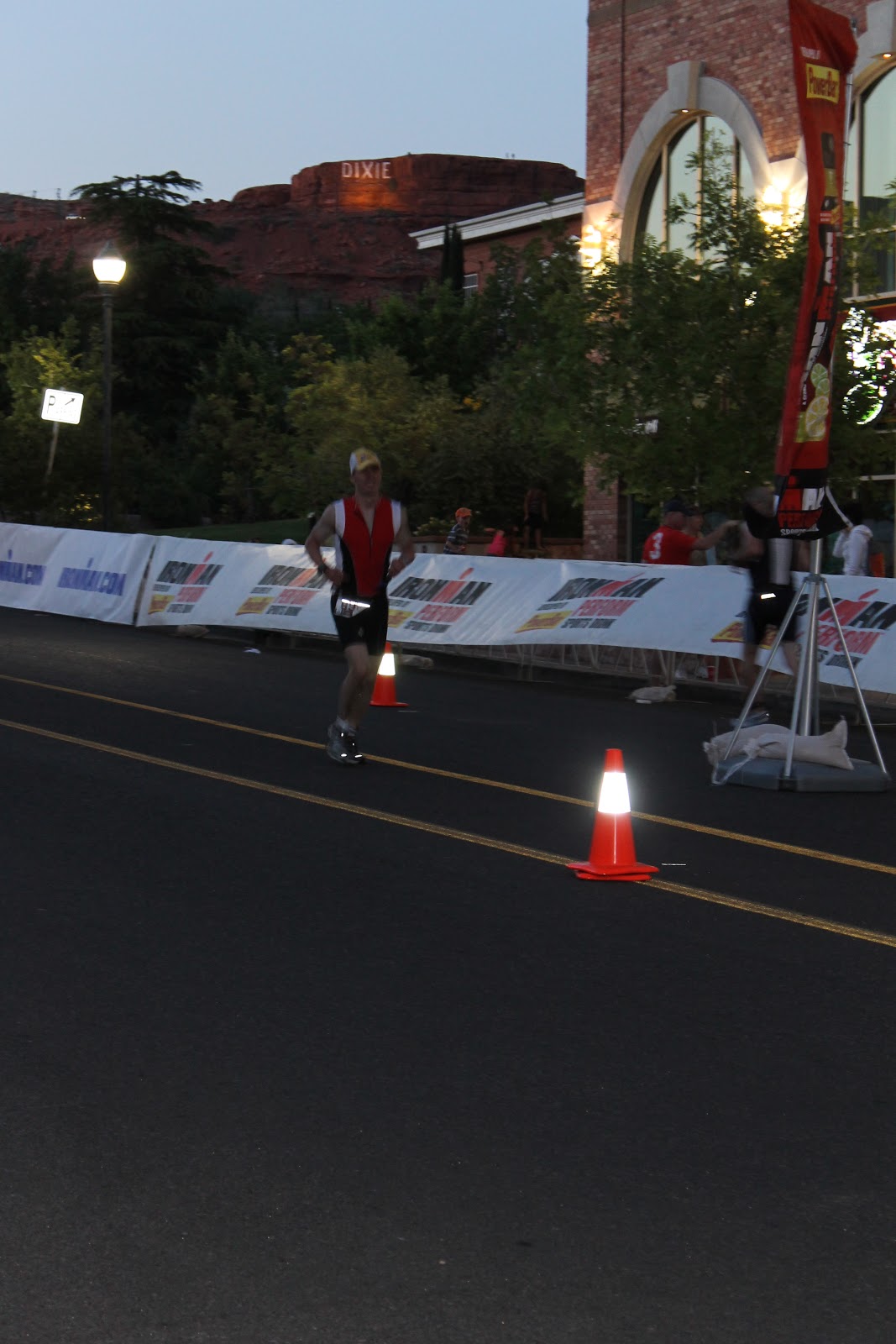 Despite having stuck to my nutrition plan throughout the day, at about the half-way point I felt extremely weak.  I got in some extra calories, hoping for a magic cure from the aid stations.  My parents and siblings, unable to catch me during the bike, made up for it by being seemingly everywhere on the run.  Their encouragement helped a ton as I grinded out some painful miles.  My lack of run training was manifesting itself, but I was determined to "run" as much as possible.  I ran/walked the last several miles with a guy named Micah from Denver.  We had run the first loop or so together as well, so it was a fitting end.


The pain I felt was magically erased in the last quarter mile by the raucous finish line atmosphere.  It had been an incredibly long day, but one I’ll never forget.  Run 5:37.  Ouch. 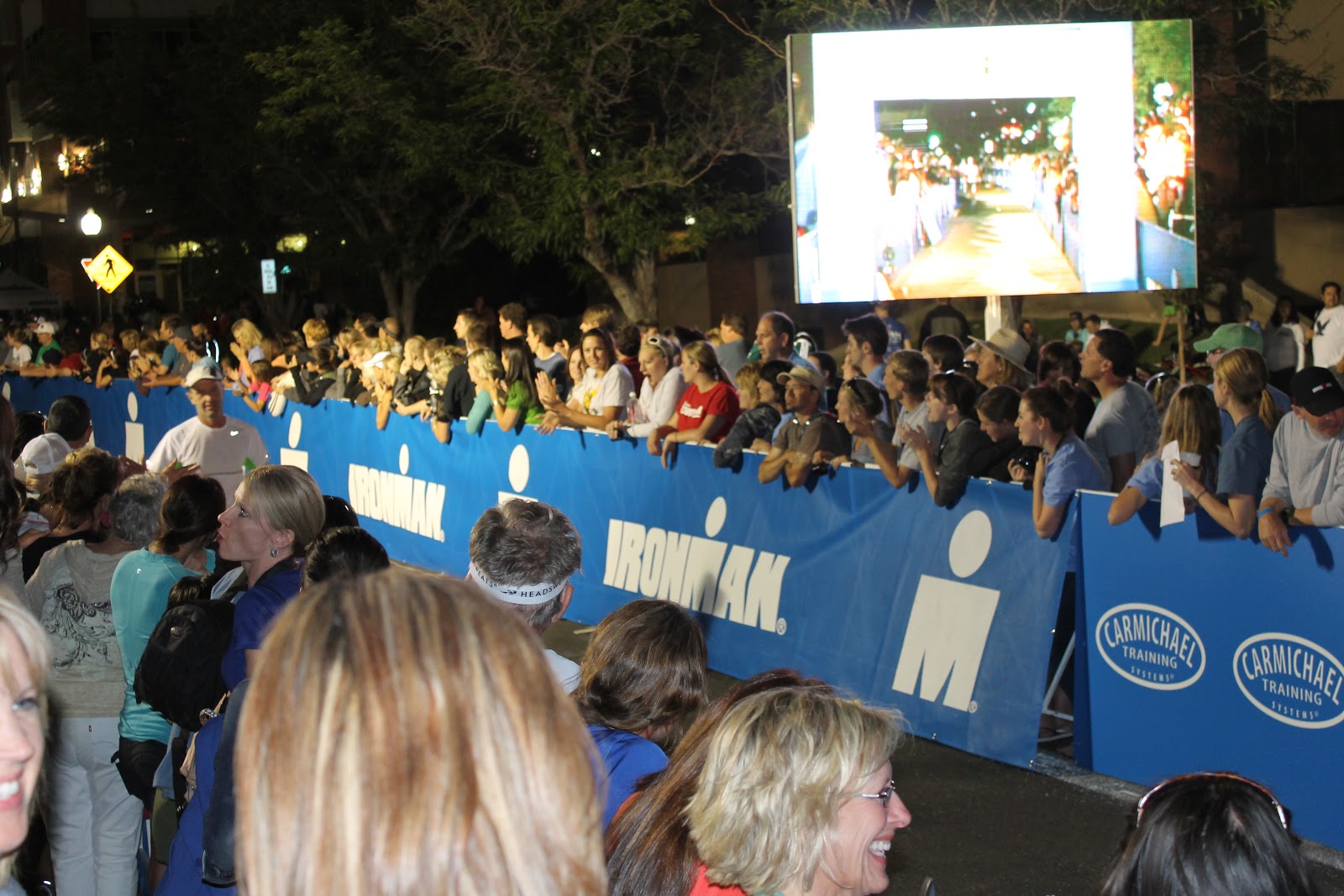 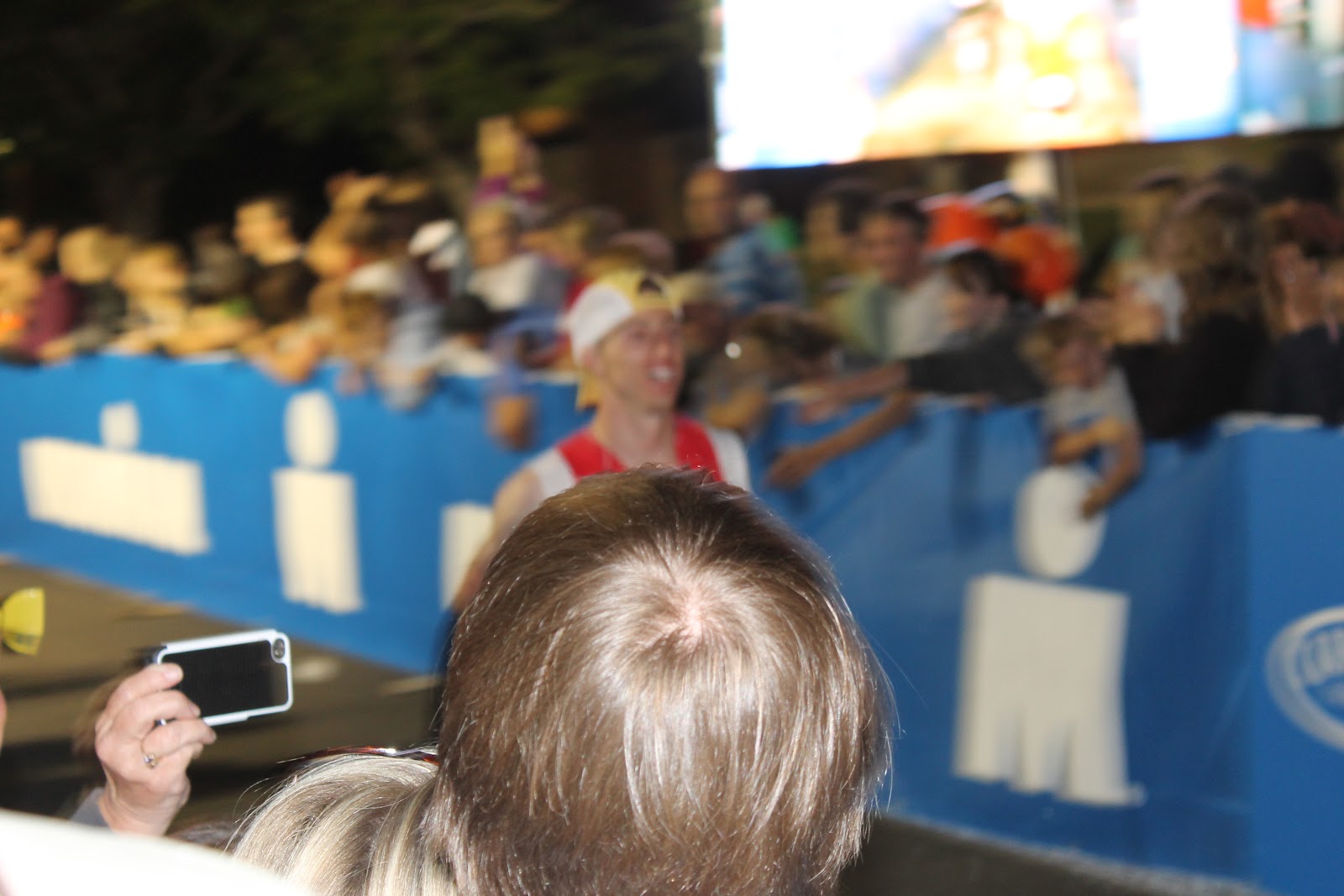 I later learned that Ironman St. George 2012 had the highest DNF % (did not finish) in Ironman history at 30%...  almost 1 out of 3.  Hundreds of people had to get rescued from the water, but thankfully everyone was ok.  Hundreds more fell victim to the bike.  Due in part to the difficulty of the course and St. George’s propensity for tough conditions, the race distance has been changed to a half-Ironman (70.3) beginning in 2013.  However, the legacy and the legend of Ironman St. George will forever live! 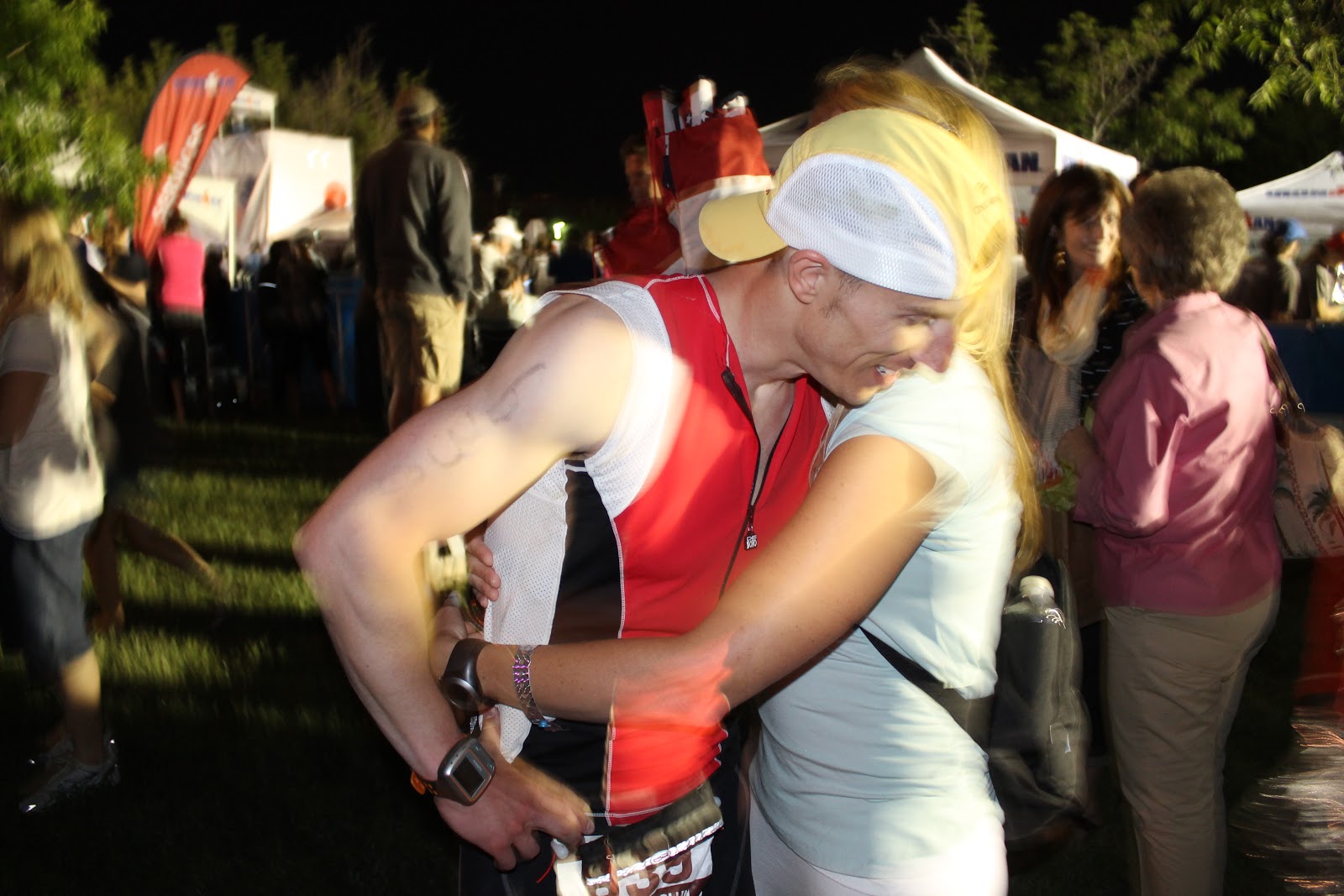 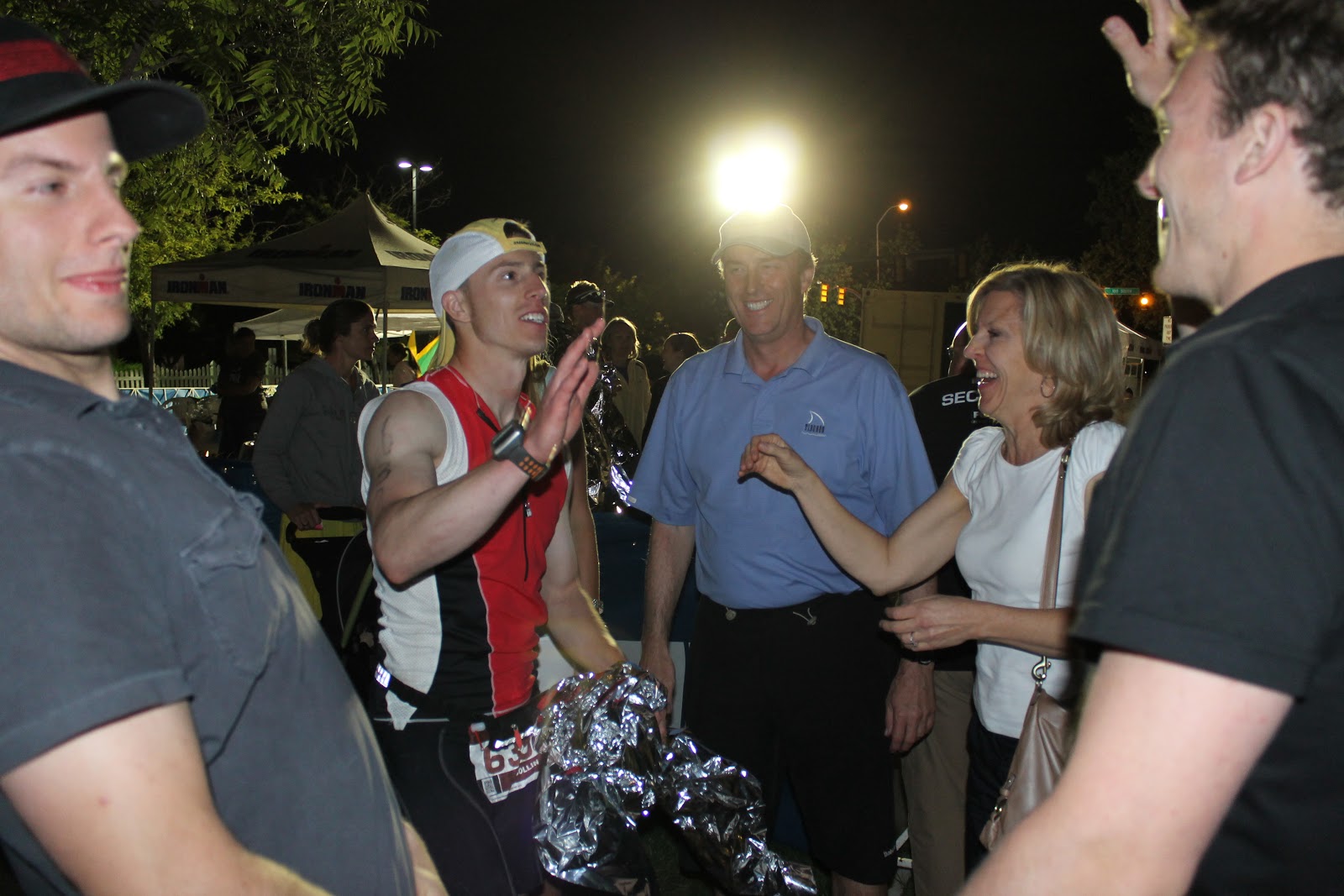 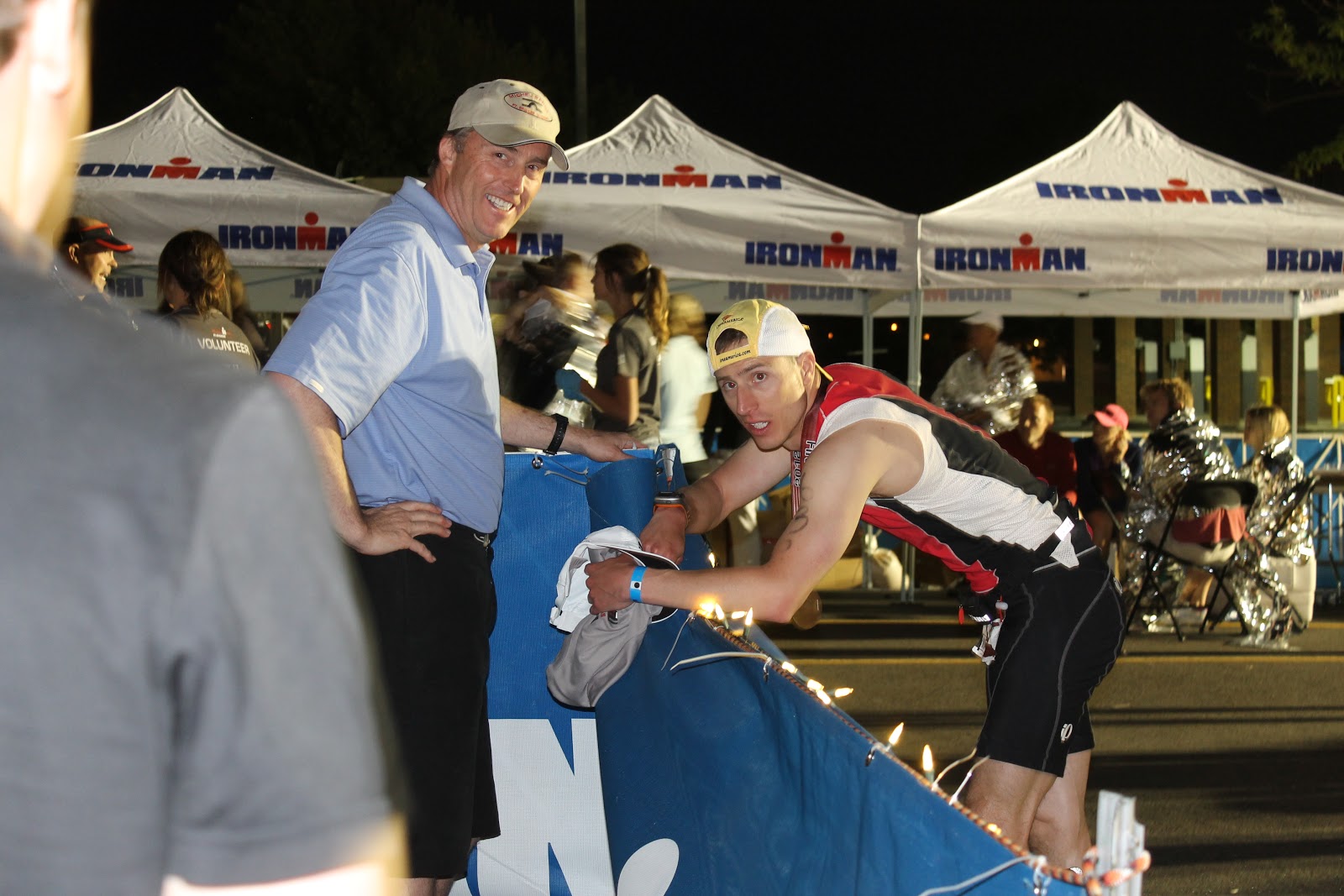