Which of these things is not like the others? 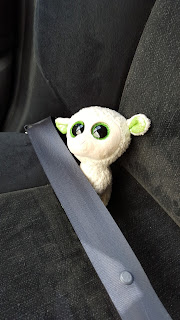 Last Thursday I embarked on the ~5 hr. drive to Ironman 70.3 St. George. With 46 states and 24 countries represented, most people traveled a lot further than I did, including my TTT teammate Kristen’s 10 hr drive from Colorado. My fam was already in St. George, and it was requested that I bring down my daughter’s stuffed sheep, Lala. Lala turned out to be a surprisingly good road trip partner, serving as a sounding board for some race ideas, providing a shoulder to cry on, and rocking out with me to some 80’s classics.


As I’ve done in past years, I timed my travel to be in the Ironman Village for the "pro panel." Being the North American Ironman 70.3 Pro Championships, there’s always a stacked field. On the women’s side the panel featured multiple IM World Champ Mirinda Carfrae, Heather Wurtele, & Meredith Kessler. On the men’s side was multiple IM/ 70.3 World Champ Sebastian Kienle, Lionel Sanders, Ben Hoffman, and Brent McMahon. It seems that Ironman is stepping up their game in terms of marketing some of their stars, and I hope they were compensated for their time, etc… they were all very generous with it, taking pictures with lines of age groupers, sitting in 90 degree heat answering our nerdy questions such as “what kind of tire pressure do you run." After the panel there was the usual time allotted to lots of pros milling around, making themselves accessible and hanging out with us. I talked with some of them and, like always, was very impressed. Tyler Butterfield, Sanders, Kienle, Magali Tisseyre, Hoffman, the Wurteles, McMahon, and Leon Griffin to name a few were all super cool.

The forecast called for clouds to come in Friday with a slight chance of rain, dropping the high from ~90 degrees and windy on Thursday to ~70 with less wind. Saturday was to be a high of 70, not much wind to speak of, and a 20% chance of rain only during a 1 hour window when I’d most likely be running. Perfect!

Race morning, Kristen, her friend Mark from Houston, and I were up and at’em by 4:30. My friend Russell who had crashed at the house with us got up as well (actually he had no choice) and gave us a final check on the weather. Same as it ever was.

We only made one wrong turn on our way to the shuttle buses, dropped our run bags in T2, and hopped on a bus for the drive through the dark to Sand Hollow reservoir. I chatted with the guy next to me for a while, then couldn’t decide between Rage Against the Machine type music or super chill to stay relaxed... I settled on the latter.

After the usual pre-race stuff, I lined up in the parade of wetsuit-clad weirdos with my wave (10th wave out of 20 or so). I was glad for a few extra minutes to brace myself… with the flurry of activity before a race like this, it’s only a few minutes before when it sets in that it’s actually go time. 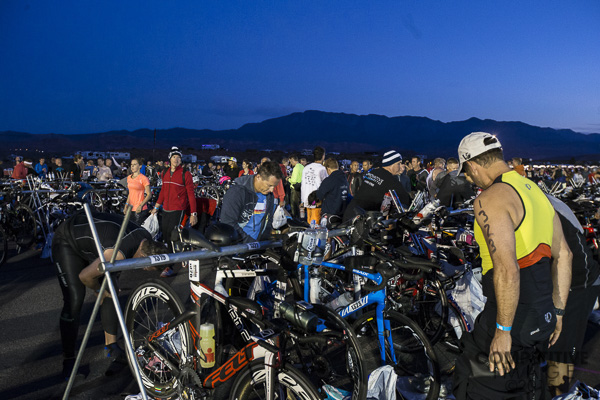 We entered the water in the “on deck” circle, with 3 min to go. I like to get a good warm up in when I can, but it’s not feasible sometimes. The water was chilly at first and I just treaded water and took in some deep breaths. As Derek Zoolander once said, I had "a few butterflies in my basket, but I was doin' ok."

The horn sounded and I felt good from the start. In the past at times I’ve struggled with a painful/tight shoulder, but switching to Roka last year has really helped in that regard. I felt strong. There was a little bit of chop, but not even 1/1000th like four years ago. 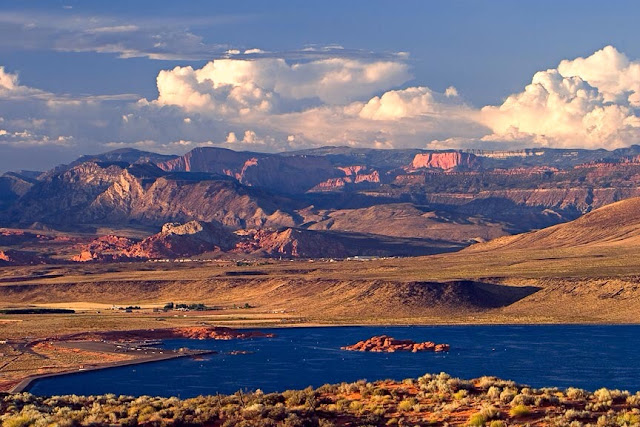 I hopped on Rip and within less than a minute it started to rain. It was light, mainly just annoying, and I had some flashbacks to 2012. The roads those first few miles were rougher than I remembered… I wonder if they’ve been washed out due to recent flooding or something. There were a couple sections that had become a water bottle graveyard. The roads smoothed out and the rain stopped for a few miles, then picked up again before giving us a break. I was riding within myself and enjoying it, spinning up the various climbs with relative ease and occasionally making a little small talk with people around me.

At mile 30 something on the course (on the Red Hills parkway, which doubles as the middle section of the run course) off in the distance were storm clouds that were dark as night. Ominous. That said, they seemed too far off in the distance to impact us.

Unfortunately I was dead wrong, as we soon were getting absolutely pummeled. In talking with people after the race, some avoided the downpour altogether, but most of us caught at least a piece of it. It was coming down, and I soon had to navigate one of the steepest descents of the course, from Red Hills onto Snow Canyon Parkway. It was a little sketchy, but thankfully I kept the rubber to the road. I witnessed one guy who was not so lucky, and I hope he's ok. The next couple miles I was locked in and it was actually pretty fun. It felt hard core. After a few miles the downpour stopped which was good, but this kicked off the most miserable part of the day for me. Soaking wet, with no sunshine and some swirling winds, I was freezing. My arms and legs were shaking, and it dawned on me that if I had a mechanical of any kind I wouldn’t be able to move my fingers enough to fix it. Making matters worse, at this point I turned left to begin the beautiful yet nasty Snow Canyon climb.

My primary fuel is Hammer Perpetuem, and from a nutrition standpoint I felt fantastic. My struggles were more due to the cold freezing up my legs. Whereas I felt so strong on lesser climbs throughout the ride, I now just felt like the pistons in my legs had stopped firing. I was so slow up that climb, it’s embarrassing. At a few points I was tempted to get off my bike and walk, but mercifully I eventually saw the little shack that marks the top. I was spent. From there, the good thing is that what goes up must go down, and you fly the last 7 miles or so into T2. I think I maxed out at 45 mph. I tried to take in some gel during this time and was able to move my hands just enough to pull it off. Into T2 volunteers kept warning people that the asphalt was slick and to go slowly. It was kind of like the kid that’s not technically running at the pool after the lifeguard yells at him five times, but it’s pretty dang close. I racked my bike, dumped the puddles out of my running shoes, and was on my way. 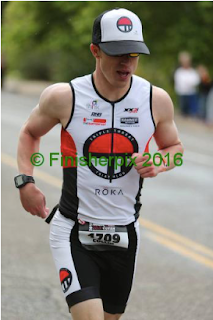 I felt good the first 3 miles of the run, despite the varying grades of steady uphill. I was still thawing out, as was everyone I’m sure, but it was no longer raining and the sun was even threatening to make an appearance. Once you crest mile 3, miles 4-6 are the opposite, varying grades of downhill. The whole course is a roller coaster, with hardly a flat part to speak of. Even though I was running downhill, I held back a bit and reminded myself to be patient. I could tell that it was going to be a “grind it out” variety of run as opposed to two years ago when I was enjoying myself out there and closing out strong.

You turn around to climb miles ~7-10, and it ain’t easy… I counted my steps to 20 over and over for a while, just trying to keep “running” during this stretch. The last 3 miles you’re home free, going down what you climbed in the first few miles. As long as your legs aren’t completely shot, you can lean and let gravity do a chunk of the work for you. After a little sun and warmth during the middle portion of my run, it started to sprinkle the last few miles and I actually welcomed it. Ironically, after tough conditions on the bike I must say that the weather for the run was pretty ideal... better than a blazing hot day for sure. Eventually I could hear and see the finish line, which is always a welcome sight.

Either Mother Nature threw us a curveball, and/or the untrustworthy St. George weather guy got a kick out of deceiving us once again, but it’s great to conquer any obstacles the day throws at you and still get’er done. I was disappointed with my run, having targeting ~1:50, but did the best I could muster on the day. If you’re going to do this race, which if you’ve got a little experience under your belt I highly recommend, make sure to train for this specific course by doing lots of hill training. In looking back, this is something I didn’t place enough emphasis on over the past few months. All in all though happy to have 70.3 #10 in the books! Shout out to Kristen and Mark, it was great doing this race with you.