Ironman Champion Mathias Hecht - "I won't give up"

For anyone who follows the sport, this man needs no introduction. For newcomers, Mathias Hecht is a professional triathlete from Switzerland who has competed at the highest level since 2005. He has 11 Ironman podium finishes to his name and several wins in his career, including Ironman St. George in 2011. He was kind enough to take some time out of his schedule for the Triple Threat blog.

I was a volunteer at St. George in '11… it was hot & windy, in addition to the relentless hills, yet you put on an amazing show. I still can’t believe you ran a 2:56 marathon on that course! Do you consider your win at IMSG to be your greatest accomplishment thus far or your 8th at Kona in 2008?

I think my St. George 2011 race was close to what you call a perfect race. I didn’t have one low during the entire day. I made no mistakes, even when (Maik) Twelsiek and (Paul) Ambrose went past me on the bike or when Ben Hoffmann was about to catch me 21km into the run. My 8th in Kona 2008 was not such a race. I had some major problems on the run and that’s why I think I still can do much better there. 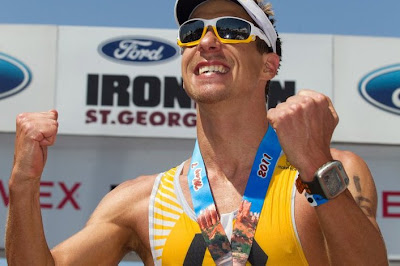 In an article with Slowtwitch you said “this title was very special as I said to my mum, this year I am going to win my first Ironman and it will be dad’s win (Mathias' dad passed away on October 22, 2010 after fighting cancer for over three years). He taught me how to fight for something. This was his win and I was very sad he couldn’t stand on the side of the course and watch me doing it.” I’m always interested in what motivates people… would you say your dad has become a main source of motivation/inspiration for you? What else drives you as an athlete?


Losing somebody that close has a major effect on everything in your life. It is a negative experience that stays with you for the rest of your life. To lose a very important person and to realize that this person will never come back is hard to take. My dad was a big supporter, but he never pushed me to do what I do, and I appreciate that a lot.  It is the only way to get real passion for what you do.


If you see somebody fighting for his life it definitely changes perspectives. It is a real fight. You can’t compare that to fighting in a race. The race is a game, but life is definitely not.
I think I get my biggest motivation because I have a lot of love and passion for what I do. I feel blessed and privileged to do what I do. I think I learned that because my parents let me do what I wanted to do. They never got too excited, but still, I felt their support and pride.

I know you came back to St. George this May for the US 70.3 Championships and raced Ironman Texas, but have been prevented from racing lately by a nagging hamstring injury. In a blog post from July you wrote that you hoped to be back by October, but that Kona for this year was shot. What’s the latest on your rehab and return to racing?


I’ve been dealing with this since IM NYC last year. It never went away and I tried to train on it all winter and push through it, and then race. But it got even worse and I just couldn’t perform anymore as my muscles didn’t work properly. The hamstring collapsed after a few minutes into a race effort. I tried all different kinds of therapies. You really become an expert on your injury. But nothing really helped. So I decided to test for compartment syndrome, and the pressure numbers they measured were well through the roof. So I had surgery for compartment syndrome on my right hamstring. Actually I had the same done on my left leg in 2007 and it came really good. The year after, I finished 8th in Kona. So I am confident that this will work out well now, maybe even for a late season race. If not, then I will come back strong in 2014. 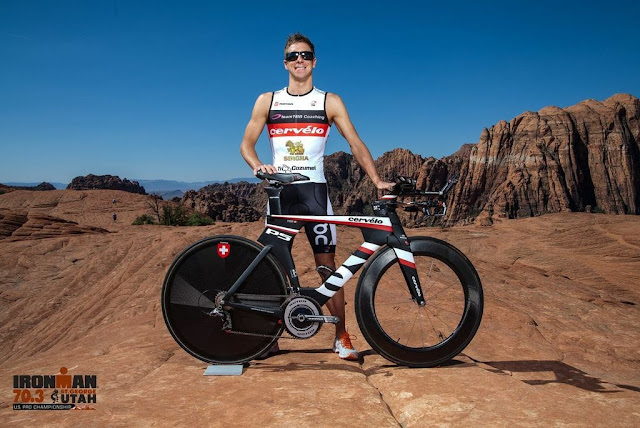 The Dresdner Kleinwort/Commerzbank teams from 2007-11 seemed like an incredible situation and opportunity. Do you miss those days at all and have you stayed in touch with your former teammates? How does team TBB compare/contrast?


The Dresdner Kleinwort/Commerzbank Team was the most professional team our sport has ever seen. I definitely miss those days as it helped a lot to be on a long term contract without worrying about your salary and sponsorship every year. It gives you the freedom to concentrate on training and racing, and I am a person who needs that. I don’t race well when I have the pressure of making money to survive. You can deal with that when you are 20, but not when you are 30.Things are a bit more serious at that age and as a pro triathlete you put all this energy and time in the sport over so many years. You missed on normal work experience, so you need security in your job as an athlete. Otherwise the effort is not worth it. It’s not about the experience and adventure anymore.


With Commerzbank there were 3 people working full time for the team. So all the important outside factors (like media work, sponsorship, travel organization, training and racing gear, etc) were organized by a professional team management. I think this is only possible if you have sponsors from outside the sport of triathlon, as you see in every other big sport. People think the team stopped because they put too much money in it in a short time. But the major problem was the takeover of Dresdner Kleinwort investment bank by Commerzbank. It was the Dresdner Kleinwort CEO and Normann (Stadler’s) idea and project. If Dresdner Kleinwort was still around we might still see a team out there. I understand and accept the decision by Commerzbank, as triathlon was not part of their marketing strategy. Still, I have to thank them a lot that they kept the team going for another 2 years. I am still in contact with my former teammates. Still great to see that they are all doing good. 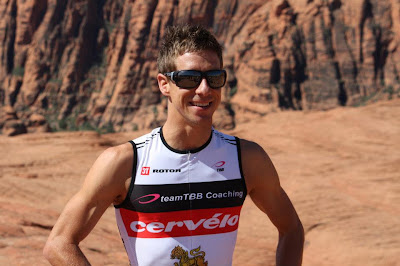 Team TBB is a different approach... a different idea. Compared to the Commerzbank Team it has many more athletes in it. It is a whole different thing if there are 6 athletes on a team or 30+. But Team TBB has been around for a very long time and that is very rare in our sport. Team TBB also stands for amazing success in our sport and for sure it stands for Brett Sutton, the master himself.


I like to have a good personal relationship with my sponsors. It is important that they know you as a person, not only as an athlete. I appreciate the relationship I have with Cervélo a lot.

Team TBB coach Brett Sutton is notorious for some killer training sessions… can you share a couple of examples that stick out in your mind?

Yes, some of his sessions are very famous indeed. He keeps things simple and his 100x50m in the  pool or his 30x800m on the track are well known by most. But Brett is not just about these “famous killer sessions”. He is a master of combining the right days and weeks. It is the mix that really makes the difference, not one specific session. He can read athletes like nobody else. He is straight forward and there is no “bs-talking”.

Among the Swiss people, who would you say are the most famous Swiss athletes? (I’m assuming some guy named Roger is on that list) With you, Caroline Steffen,  Nicola Spirig, Ronnie Schildknecht, etc, as well as IM & IM 70.3 Switzerland, how popular is triathlon in your home country?


Triathletes are not very well known in Switzerland. Nicola had to win the gold medal at the Olympic games to get known by a wider public. Natascha Badmann had to win Hawaii 6 times. So you have to achieve amazing things to become a familiar name outside of the sport itself. Most famous Swiss athletes… well, there are not many. Like you said, there is Roger Federer for sure. We have some of the best skiers in the world, a few really good ice hockey players who play in the NHL, (Thabo) Sefolosha who plays in the NBA and Fabian Cancellara. With Dario Cologna we have the #1 cross country skier in the world at the moment.

I created an Ironman “tournament bracket” in March, in which people essentially voted on their dream destination race.  IM Switzerland was at the top of many people’s list... in your opinion what makes that race special? You’ve been on the podium there multiple times... outside of Kona is it the race you’d most like to win one day?


It is my home race so it is special because so many people along the course know you. For sure it is on top of my list for the races I want to win. I won’t give up. The race is very scenic and the lake in Zürich is a great place to swim. There are not many places where you swim and can see the snow in the mountains. 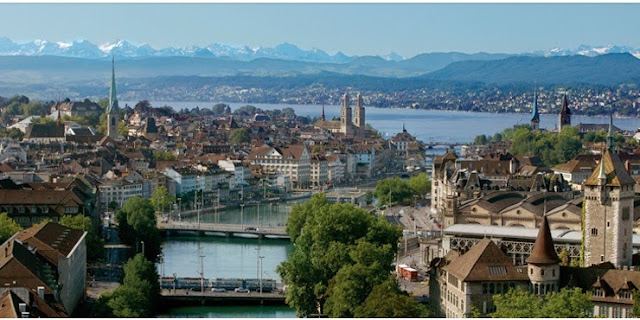 I ask this question often, but the answers are always very interesting: among the following options, how would you distribute the credit (100%) for a race gone extremely well? For these purposes let’s quantify that as being on the podium.

You’ve been around the world and back many times… what’s on your “podium” for favorite races and places to train? 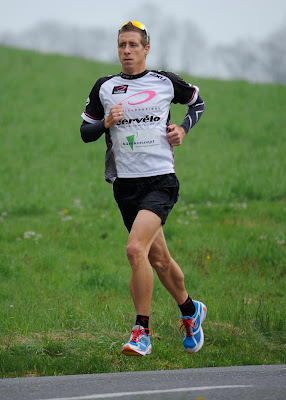 Most favorite race is Kona. There is only the Olympics and Kona in our sport that really counts. History is made in those two places. Everything else is nice to have, but won’t change anybody’s life.


I love to train in the mountains. Switzerland in summer is a great place to be. But I like Australia and some parts of the USA a lot too. I love good weather and I need an ocean or mountains. Then I am happy.


What advice would you give to people new to the sport?


Most important, enjoy what you do. Enjoy the journey and don’t put pressure on yourself. It is a great sport, with great people and great locations.


Thanks Mathias, best of luck with a speedy recovery and we hope to see you back racing soon!

Follow Mathias through his recovery and return to the top!


Also, check out the Hecht team of sponsors: