Studies have shown that approximately 0% of the earth's population enjoys getting a flat tire. Flats are merciless, playing no favorites and striking at anytime. At Kona last year, Sebastian Kienle was in a great position for the win until a flat threw a wrench in his plans and he ultimately finished 4th. A few years prior, Chrissie Wellington had a dominant lead when a flat (and botched attempt to fix it) cost her serious time. She still went on to win, because, well, she's Chrissie Wellington... but I'm sure it was stressful.

Although I had a blast with my own flat at a recent race, it motivated me to learn what (if anything) can be done to help prevent such fun from occurring again. One precaution within a triathlete's control is the use of tire sealant. A friend introduced me to a company called Flat Attack, based in Salt Lake City, that makes an incredible product now in my toolkit. A few days ago I had the chance to sit down with Steve Henich, owner of Flat Attack, to learn more about this company.

When was the concept of tire sealant invented and what’s the history of Flat Attack?

The tire sealant concept has existed in one form or another for at least 80 years, but it took a while to be brought to market. Believe it or not when I was a kid we’d put canned milk in our tubes. The milk would curdle into little balls that were effective against flats, but if you had a tire blow out, man did it stink! 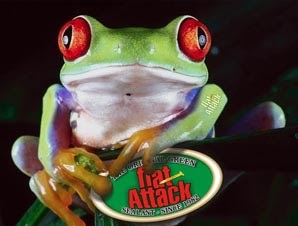 Flat Attack, originally known as No Flats, began in 1982 as the first of a new generation of tire sealants. Slime, a competitor that some of your readers may be aware of, was started in 1989. Slime has been marketed well over time despite what I believe to be a very inferior product. Over the years dozens of other companies have tried different formulas and ideas. For example, some use latex, which has been found to dry quickly, making it useless after 2-3 months. Others use additives that cause tire rubber to rot over time.

To those unaware, what are the pros and cons (if any) of using tire sealant?

The "con," as with any sealant, is a small amount of added weight… 2-3 ounces per tube, with the weight spread evenly around the tire. If you had two identical wheels, one with Flat Attack and the other without, you’d have a really hard time telling which is which.

Over the course of, let’s say, an Olympic distance bike (40k, ~25mi) how much time would be lost due to the added weight?

This depends on different variables, but we’re talking an impact of seconds.

The "pro" is that it keeps you in the race! Instead of being stuck on the side of the road, you just keep rollin. For a long race such as LOTOJA, the time spent changing a flat isn’t a big deal. That said, at last year's race a farmer drove onto the course and scattered hundreds of “goat heads” (a common type of thorn). Everybody was flatting, and lots of guys ran out of tubes. So flats can definitely come into play for long rides... cyclists with Flat Attack in their tubes had a huge advantage. For a triathlon? Get a flat and most likely you just lost… especially for shorter distance events.

Flat Attack is so easy to work with and it’s totally safe. There’s nothing toxic or dangerous about it, and it lasts for years. No other product on the market lasts like ours, and most are quite toxic. For example, one teaspoon of some of the other stuff could kill a small dog.

So why don’t competitors mimic Flat Attack, is the formula proprietary?

Others have tried to copy the formula, and some even have chemists on staff.. but they can’t get it to work like Flat Attack. 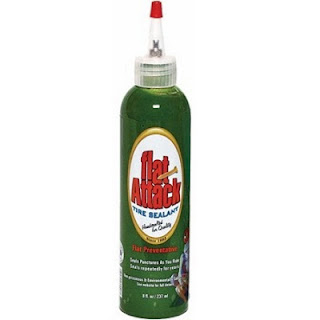 How do you apply it… is it complicated to use? Any tips?

The biggest issue is you need tubes that have a removable presta valve. Within the last few years this type of tube has become more and more common as sealant becomes more mainstream. All you do is unscrew the valve and apply the directed amount to the tube, then screw the valve back on. It’s really easy. (side note: they also sell "Freedom Tubes," which are tubes pre-injected with Flat Attack). As far as tips, the only thing is it’s better to have the valve in the upper half of the tire when pumping up and letting air out. That way gravity pulls the sealant to the bottom of the tube and no sealant can get in the valve stem.

Where do you sell Flat Attack sealant and Freedom Tubes?

On-line as well as lots of bike shops.


When do I need to re-apply or get a new tube?

Flat Attack seals puncture holes permanently, so hardly ever. The size of the hole is the only potential issue... a gash that's 1/4 of an inch or bigger, say from a big piece of glass, may require you to replace the tube.

Let’s say I hit one of those "goat heads," calling Flat Attack into action. What is the science behind it... how does it work?

When you begin pedaling, Flat Attack immediately starts coating the tube. The centrifugal forces cause a nice, even coat all around the tire. When something punctures the tube, air tries to escape from the hole, but in doing so it pulls sealant into the hole. The fibers in Flat Attack bind together and dry in the hole to form a permanent plug, similar to a clot.

The use of sealants is commonplace among mountain bikers, who ride bigger tires with less pressure. Is Flat Attack effective for road cyclists and triathletes riding with higher pressure, say a psi of 100-120?

Yes, it's very effective, but depends in part on the size of the hole. A while ago I hit a huge shard of glass that put a big gash in my tube. I could hear the sealant in action, but it probably took 3 revolutions of the wheel before it sealed. My tire was a bit mushier than I would have liked, but I was still able to continue on. Once I got home I checked and found that my psi was ~90-95. A little low, but still rideable. In that same example, less air would have escaped had I been riding a mountain bike. 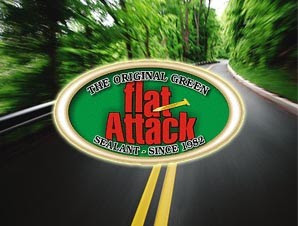 On the other hand, for a thorn or other small puncture, the seal is immediate, with virtually no tire pressure lost. In fact, you wouldn’t be able to measure the loss... it's too fast! However, without sealant even that tiny thorn prick would have left you on the side of the road.

Will Flat Attack prevent all flats?

It can’t seal up a flat from an absolute tire blow out from a pinched tube or a faulty tire. As previously mentioned, some gashes are also too big to effectively seal. However, for run of the mill punctures (nails, bits of glass, etc.) it is very effective.

I didn’t know tire sealant existed until a year or so ago. Is educating people who are newer to cycling or triathlon a challenge?

The biggest hurdle we face is that people lump all tire sealant companies together and say 'sealants are crap' or 'sealants don’t work' when they haven’t used a good one. Overcoming that stigma is a big problem. We’re the oldest sealant company, but we're not the best known. Flat Attack is way better than the other stuff that’s out there, so we’re working to change the perception that all sealants are the same. 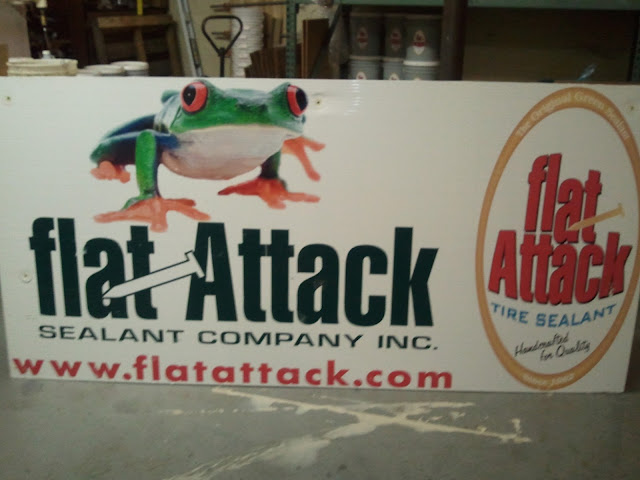 In summary, here's what Slowtwitch.com writer Greg Kopecky had to say on the subject of tire sealants in May 2012:

"While it can’t guarantee you won’t puncture, it is cheap insurance that has a good chance of saving your race. At this time, it appears that the rolling resistance geeks are largely agnostic on the topic—there is no measurable change in Coefficient of Rolling Resistance (Crr). All it costs you is a little bit of weight. Weight that is, in my estimation, well worth carrying around.

The biggest piece of take-home advice I can give you is this: Something is better than nothing. In most every situation any sealant is better than no sealant. You can’t be sure it’ll seal, but why not take a shot? In my mind, sealant is one area of immense potential for future growth. The benefit from the fastest frame, wheels, helmet, and clothing can quickly go to waste if you’re on the side of the road fixing a flat at mile fifty." 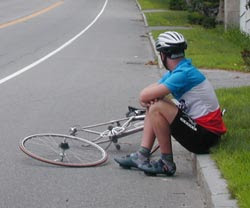