I've always been a minimalist.  I don't like my life cluttered with too many things.  Most of my life's possessions have been given to me over the years, and besides triathlon entry fees, I don't often spend money on myself.  I try to be organized and prepared, but without having redundant stuff.  Back in college, it became a game to pack a smaller and smaller bag for each of my trips home to see my family over holidays.  By the last trip I was down to a fanny pack, which exceeded even my brother's expectations.  "Wait, that's really all you brought?!?"

Along those lines, going into Christmas my fingers were crossed that Santa would hook me up with a few essentials.  I was in severe need of a few items that are crucial to the triathlete's tool kit (I recently wrote about my running shoe experience).  You know the phrase "what do you get for the man/woman who has everything?"  That's a great question, one that I don't have an answer for.  But for the man who has hardly anything?  Well... pretty much anything will do.

Here's a quick run-down of a few triathlon-related gifts I received, along with what they will be largely replacing:

Exhibit A:  These bad boys have seen better days.  They're so threadbare they're practically see-through, and by the time I hoist myself out of the water they're longer than a pair of women's yoga capris.  Last but not least, there's a nice little hole forming in the crotch region. 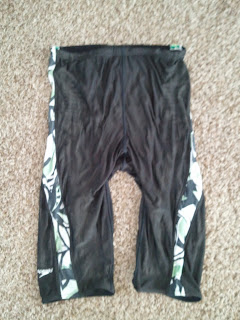 By comparison, on the right you'll find a non see-through, not stretched-out, no holes suit.  It's a Christmas miracle! 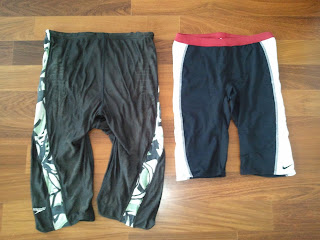 Exhibit B:  Until yesterday, I only owned one bike jersey (little red riding hood there on the left).  I now have another option for both color and length of tan lines.

The Verdict: This is a far less dramatic makeover.  Little red is still in great shape so I'm keeping her on an alternating basis. 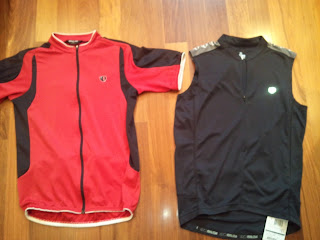 Exhibit C:  I bought the running shorts on the left in the summer of 2001.  While I run in other stuff as well (cold weather gear, tri shorts, basketball shorts, etc), they have remained my only true running shorts for over a decade.  I think they were the same color as the new ones once upon a time.

The Verdict:  These are virtual antiques, and will be hard to throw away.  I see them being used sparingly, a la Tim Tebow with the Jets. 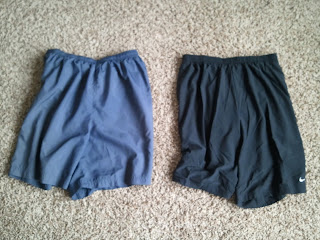