Still a teenager, Julia Slyer (New York) is simply an inspiration... here's her report from last week's Ironman Lake Placid. Rumor has it she's since signed up for October's Ironman Maryland as well!


As the oldest Ironman in the continental US, Lake Placid is an absolutely amazing place to compete. This year was my third time racing at Placid, but my 17th time (out of a possible 18) at the race, whether I was a three-year-old spectator, 15-year-old lifeguard, or, this year, the youngest female athlete. In short, IMLP feels like home, and I’m already signed up for next year!

I drove up with my dad on Friday morning for check-in after trying to stay off my feet all week.  After a short ride Saturday morning (and a short freak out over fixing a shifting issue) I packed up my transition bags and checked my gear in.  I also got to meet Gina Shand (Virginia) and chat in the transition area!  Later, I met with my coaches to go over my race plan and goals before turning in early. 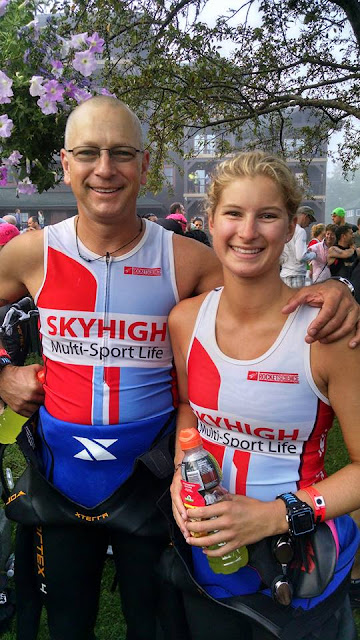 A few years ago, IMLP switched from a mass, in-water start to a rolling start using self-seeding.  While I’m not a huge fan of this system (unable to gauge where your competitors are later, bad self seeding), the rolling start system is definitely safer for all involved.  That being said, this year’s swim was the most violent I have experienced at Lake Placid.  After a solid first lap (32:35) of being swum over and hit, I was forced underwater at the last turn buoy and swallowed a good amount of water.  The queasiness this induced forced me to slow down quite a bit on the second lap (36:26), giving me a final swim time of 1:09:01.  This was a fairly average swim time for me, but a bit slower than my goal of 1:05.

This year, I have been focusing on improving my bike with the help of my coach, a power meter, and training through the winter indoors.  Because of this, I have been feeling great on the bike, and set a goal of breaking six hours for the relatively challenging IMLP course.  My race plan was to temper myself and take in enough nutrition on the first lap, and try to ride both laps of the course as evenly as possible.  I felt great the entire ride, and even managed to get even splits on both laps (2:59, 2:59) for an average of 18.8 mph.  It was a little hotter than expected, but the headwinds LP is famous for were much more calm than in years past.  Although I met my time, power, and pace goals to a tee, my nutrition was not quite on point.  Due to the heat I drank more sports drink from aid stations than I had intended, and some aid stations didn’t have the bananas I prefer to eat on long rides.  Some of these nutrition decisions probably contributed to my run performance.

My goal for the run was to match my performance at Kona 2015 (3:44), and for the first six miles, I thought I might beat that time.  My heart rate was low, and I was easily running 20 sec faster per mile than I had planned.  Once I hit the first turn around on River Road, the uphill’s hit me hard.  After the first hard uphill at the ski jumps around mile 8, I started to bonk, badly.  Normally, a glucose tablet will break my bonk in a few minutes, but this bonk persisted for three miles, forcing me to walk on and off.  Feeling a little desperate to get running again, I broke to golden rule of “don’t try anything new on race day” and drank some Red Bull in hopes of the caffeine helping.  This turned out to be a big mistake.  While I did break my bonk and get running again at mile 11 (feeling good too!), I was unable to keep anything down, water included, on the entire second half of the marathon.  Although I can’t be 100% sure of the cause, I believe this stomach issue was at least contributed to by the Red Bull.  After switching from KQ mode to survival mode at mile 8, I was happy to finish and still perform well considering the circumstances of my run. 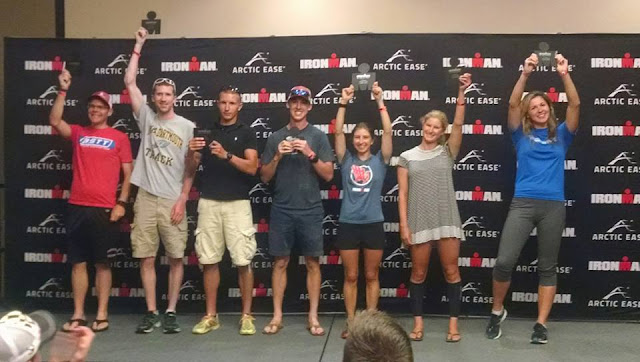 I finished only 3 minutes off my 11:17 PR from Kona last year, and I beat my course PR by 33 minutes, most of those taken off in the bike.  Taking second in the F18-24 age group, I didn’t qualify for Kona, but I did learn some great lessons, and I’m still proud of my performance at Lake Placid.  Before next year, I will be working on learning to swim better with such a large group of people, improving my nutrition on the bike and run, and focusing a bit more on training for the run.  I also learned that even when times get tough, I can push through and finish.  My dad told me after the race that when passing me during my bonk, he thought there was a good chance I would be pulled to the medical tent then and there.  Although I was in a pretty bad place mentally at that point, I was able to get through it and get running again.  I’m coming out of this race without a Kona spot, but with an even great drive to succeed and push my limits in this sport.  Ironman Lake Placid is a truly amazing venue, with a beautiful and challenging course, and some of the best spectators and volunteers in the world.  I can’t wait to return next year!