Nixon's Nuggets: Project Build It - Yes We Can!

A few weeks ago I was talking to Stewart Nixon (Colorado) about my bike upgrade for 2016. I asked him questions such as "should I go with a bike ready to ride or build up a frame myself?" and sought out his advice on components, new vs. used parts, etc, etc. After our conversation, Stewart gracefully offered to write up some of the things we discussed. Great information if you're looking to upgrade and/or build up a bike of your own for next season.


As we enter the offseason, one question we often ask ourselves is that of bike upgrades. Should I get a new bike? Should I upgrade components? For the purposes of this blog, let's assume that you have decided on a new bike. Should you go with one of the offered build packages or just get the frame and piece the gruppo together yourself?

Buying all new is the simplest route to go. All decisions regarding components are generally made for you if you go with a gruppo offered by the shop or frame maker. The company slaps on the parts and away you go. But if you want to save a little money (who doesn't, especially in a sport as expensive as ours), you can buy just the frame and piece together a gruppo. And you don't need to have all matching parts, nor brand new, except for a couple of instances.

First, let's go over the brand new parts you should buy:

Now on to the components which could be purchased second hand.

Generally, purchases of this type are made through classifieds, auction sites, swap meets, or shops specializing in used parts. As you peruse used parts, pay attention to cosmetic appearance as that can often give an indication of how it was treated by the previous owner. Also, ask the approximate mileage on parts. This will tell you when serviceable parts, like the pulleys on rear derailleurs, might need to be replaced. When buying used, caveat emptor applies - do your homework. 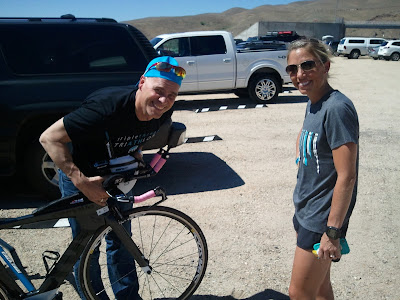 Good deals abound on the second hand market. It's best to be able to actually hold the parts you are considering so you can get a first hand look at their condition. For this, swap meets and shops specializing in used parts can be a gold mine.

Unfortunately, these are few and far between these days. This leaves classified ads and auction sites for most of your buying with just pictures to gauge the condition of parts. So I will say again, ask questions and if there aren't enough pictures, ask for more. Most motivated sellers will accommodate this request. Don't forget to research what it costs new and what most are asking for it used. A simple search will accomplish this. And one final piece of advice (again), caveat emptor!