I vividly remember the day I decided I needed a new bike saddle. It was the dog days of summer, a blistering hot Saturday in July of last year. My wife was out of town with our son & daughter, so with the day to myself, I decided to drive out to the bike course of a race I’d be doing six weeks later.


Unlike the vast majority of races in the area, which require at least some climbing, this half Ironman (56 mi / 90km) course is pancake flat. You can pretty much get down in the aerobars and let it rip the whole time… or, as I discovered, for as long as you can handle. Less than halfway into the ride, a certain part of my anatomy (who will remain nameless) started getting increasingly angry. This was hardly the first time this had happened, but this ride was particularly memorable. Each passing minute became more and more unbearable in the aero position, until I ultimately gave up trying. I rode the last half or so upright and even out of the saddle on several occasions, despite the flat terrain. This wasn’t incredibly comfortable either, but it was the best alternative.
For the record I had a decent saddle at the time, one that by all appearances was “anatomically friendly,” with a small cut-out section in the middle as many saddles these days have. 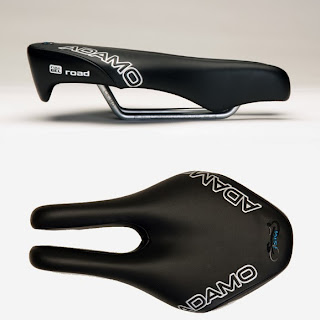 After this experience I decided it was at least worth a shot to try something else, opting for the ISM Adamo “Road” saddle after doing some research. I’m still not entirely sure if the company is called ISM, Adamo, or ISM Adamo, but whatever it is, I’m happy I made the switch. Let me be clear that everyone is different… what works for me doesn’t guarantee it will work for you or anyone else. Case in point, I bought mine “used,” having been ridden by a guy for a week who gave it a try before switching to something else.
For myself, however, I’m much more comfortable than I used to be. In my races this past season, I was pretty much able to stay aero for as long as I wanted. Honestly, my new Triple Threat tri shorts contributed as well, with a far superior (yet still light) chamois compared to what I had before.
ISM/Adamo has grown a lot in popularity lately, so I’m hardly the first to discover it, but I thought I’d give my 2 cents on some pros and cons if you’re considering a switch.
Pro: plain and simple, the big cut-out section relieves a ton of pressure. This allows many riders to stay aero for a longer period of time, resulting in a faster bike split.
Cons: in the beginning there was a sensation of falling off the front… it took some getting used to, and I wouldn’t recommend switching in the middle of your season. That said, after a couple weeks (and since) I don’t think I could go back.
The most common complaint I’ve heard is regarding the saddle’s width, that it rubs the inner thighs of some riders. This may be due to some people riding too far back on the saddle, which is designed to be sat on the front third only. I’m guessing it would look too small and scare people away if they cut the back off the thing, but you really don’t need it. Adamo also makes several models with varying widths if this is a problem for you.
It’s not the lightest saddle if you’re concerned about every last gram.

In summary, for me personally the one huge pro outweighs any cons.