Today helmets are seen everywhere – ubiquitous with the peloton and highly scrutinized by triathletes looking to gain even the slightest advantage. But it hasn’t always been that way. Just as other headgear (think American football) and the bike itself have evolved, so to has the bike helmet. How did the industry and the dome protector evolve from simple strips of leather to the expertly engineered wonders of science we have today? Here’s a high-level look at the timeline of the helmet: where it’s been, where it is, and where it’s going, focusing in the modern era on the contributions Rudy Project specifically has made in helping us cheat the wind while keeping us safe on the roads. 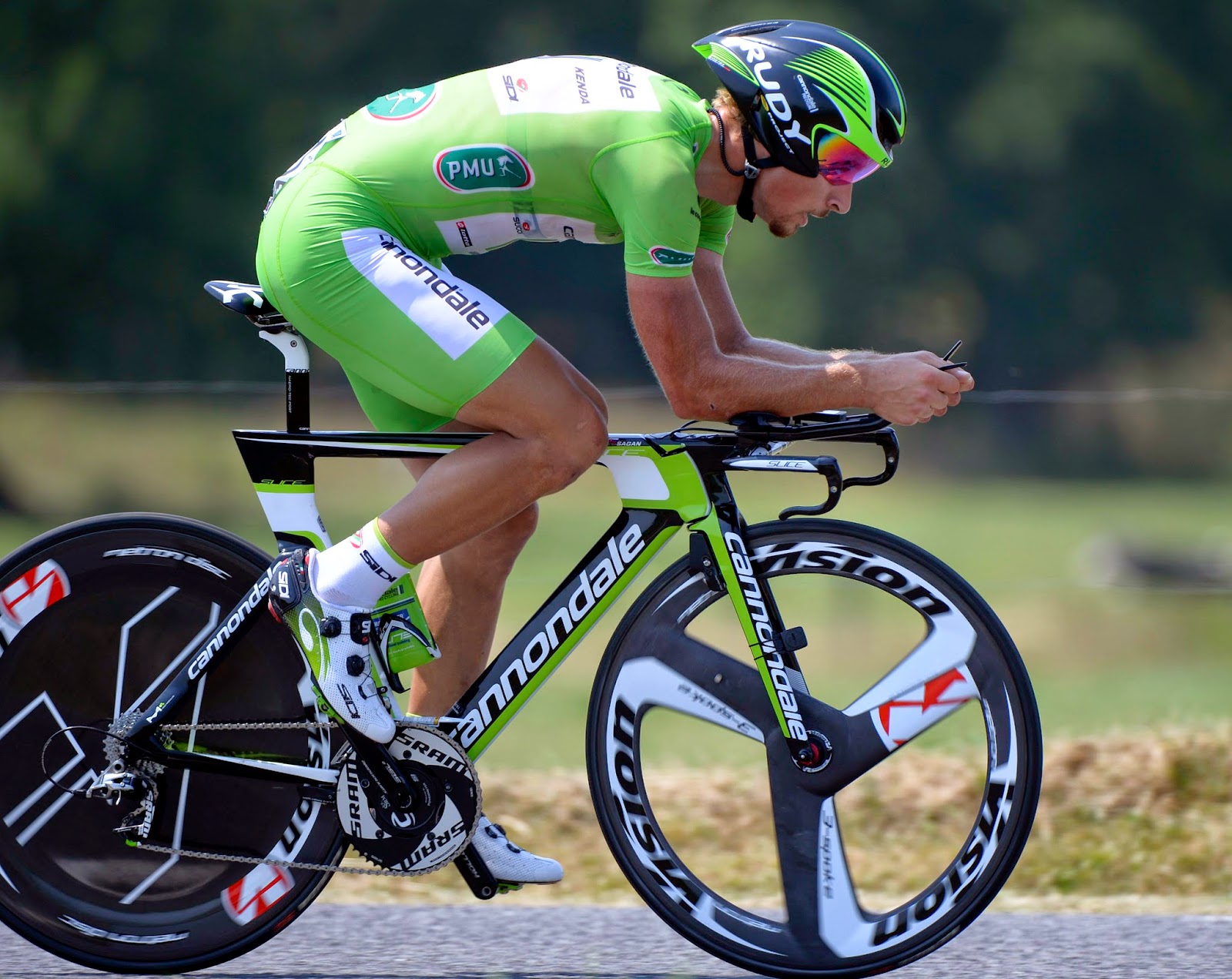 1800’s - While there’s some debate surrounding whether the chicken or the egg came first, as you might expect, the bicycle was invented before the bike helmet. Almost immediately, however, the market for helmets was born, as 19th century cyclists discovered that it hurt really bad when you crashed… especially when landing on one’s head. 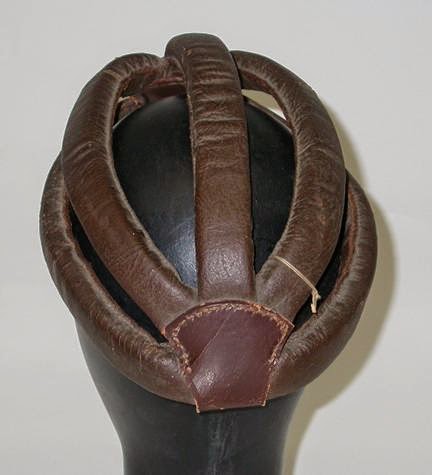 1900 – 1960’s - Around the turn of the century serious cyclists began using "helmets" made of strips of leather-covered padding. These evolved over time, but by and large the best available were made from good old cow hide. As you might imagine, leather helmets weren’t extremely protective and had a tendency to rot away over time.

Although triathlon wasn’t invented until the 1970’s, time trials have been a part of the Tour de France since 1934. The prevailing thought for many years regarding TT’s was that the regular bikes and equipment being used would forever be suitable for TT’s as well. 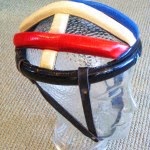 1970’s - Cycling, once considered child’s play, booms as a means of exercise and entertainment.

Leather strips still reigned supreme (often referred to as "hairnets" due to their shape) and the nicest ones were made in Italy. Approaching 50 years later, the country that brought us pizza and lasagna continues to be a major player in the helmet industry, with Rudy Project’s global headquarters in the northern Italian city of Treviso.

1975 - The Bell Biker helmet pioneers the use of hard, crushable foam with a hard plastic shell. Other manufacturers played the role of copycat, and this was the dominant model for a decade.

According to Triple Threat Triathlon national team member Stewart Nixon (Colorado), “in the mid to late 70’s people started to give more thought to their equipment. For example, some would actually drill holes in their steel bikes to make them lighter. On the helmet side, most cyclists were wearing the leather hairnets or none at all.”


1978 - Something called “Ironman” is born on the islands of Hawaii, the combination of three established local events: the Waikiki Roughwater Swim (2.4 mi), the Around-Oahu Bike Race (115 mi reduced to 112), and the Honolulu Marathon.

1980 (circa) - While he wasn’t exactly Thomas Edison, some historians trace the “aero helmet” to British cyclist Dave Lloyd’s “skin hat” invention. According to Nixon, “It was kinda like one of those FloJo track suits with the hood. It looked ridiculous, and only the 3,000% dedicated wore it… it never really caught on." 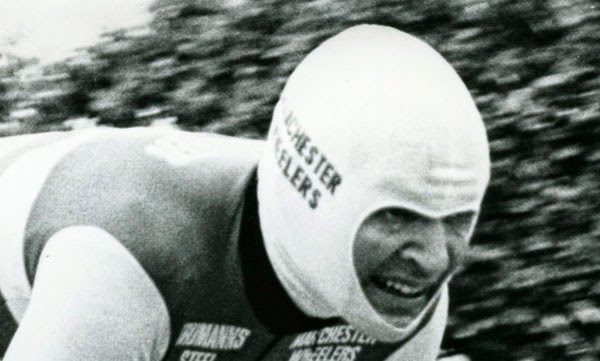 1984 - The famous title of a futuristic book written around 1950 is a pretty funny era to look back on. The US Olympic cycling team was no different, busting out some attention-grabbing gear on their way to 4 gold, 3 silver, and 2 bronze medals. So they transfused blood, big deal! Well, it is a big deal, but actually wasn’t against rules at the time. Similar to baseball writers attributing home runs in the steroid era to the ball being “juiced,” the media clung on to the US team’s high-tech equipment, including their funky “tear drop” helmets.

In addition, Francesco Moser, nicknamed “The Sheriff” in his native Italian, breaks the one hour time trial record held by Eddy Merckx since 1972. He rode 50.8 km, or 31.5 mph, aided by far superior aerodynamic thought and equipment compared to Merckx. This sparked another round of interest in aero testing and technology.

1985 – The brand "Rudy Project" is officially launched in Treviso, Italy. Although Rudy Project was still a few years off from designing helmets, they immediately made a major impression on the cycling world with performance glasses designed specifically for the sport.

This is also the year the “Snell B85” was introduced, the first widely adopted safety standard for bicycle helmets.

Leatherheads, the Bell Biker, something called the “Skid Lid,” and other older helmet styles get kicked to the curb as the Giro Prolight takes center stage. It offered a lighter and more comfortable option thanks to an outer cover of thin lycra cloth.

1986 - Giro follows this up with the release an aero helmet called the “Aerohead.”

1987 - Although lacking the sex appeal of their counterparts on the "elite aerobic" scene, triathlon continues to boom, led by Ironman celebrities Dave Scott, Mark Allen and the popular Bud Light Race Series in the US. Pioneering aero products begin emerging from triathlon, such as Scott clip-on aerobars.

1989 - Aero pandemonium! Going into the final stage of the Tour de France, a mere 24.5km (~15 mi) time trial into Paris, Greg LeMond trailed Laurent Fignon by a seemingly insurmountable 50 seconds. Whereas the man known as “le professeur” rode with no helmet and his ponytail flapping in the wind, LeMond showed up armed with both the Aerohead and Scott aerobars, something never seen before at the Tour. Fignon rode the 3rd fastest time for the stage, but couldn’t hold off LeMond, who out road and out-teched Fignon to win by 8 seconds.

According to Nixon, “LeMond blew the aero scene up with that ‘89 TT. Totally blew everything up. After that there was a lot of attention to aero design, research, and testing. It was the advent of a whole lot of aero things coming out.”

1990 – On the casual helmet front, the Prolight’s dominance was toppled by the return of thin plastic glued to the helmet, which had significant safety benefits over a cloth cover.

1991 - Cycling’s governing body tries to introduce a mandatory helmet requirement for professional racing. However, the riders’ protest proves effective and the rule is not put in place.

Early 1990’s – LeMond’s fully-functional foam helmet from ’89 is overtaken by thin plastic shells, which had aero advantages but provided essentially zero protection in a crash (as mentioned above, protective helmets were not yet required). Regarding the era, Nixon commented “we had Bell and the Aerohead, and that was pretty much it as far as something that ‘Joe Athlete’ could pick up. But you would see all these radical (for the time) designs popping up on the professional scene.” 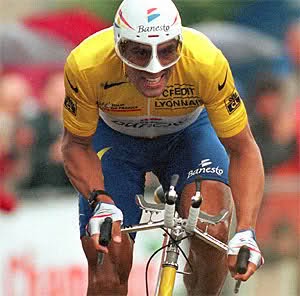 1995 – Speaking of radical, according to Rudy Project USA CEO Paul Craig, “Rudy Project’s entrance into helmets all started when legend Miguel Indurain (Rudy-sponsored for sunglasses) asked us to make him a racing shell in the ‘94-95 timeframe. It was basically a piece of plastic and had bugeye lenses… it looked pretty badass.” The so called “Sweeto” was definitely sweet looking, but wasn’t available to the general public. Added Craig, “many rode without helmets, but there was interest among some of the top pros in the aerodynamic benefits of a shell.”

1998 - With such lightweight, thin shells to work with, TT helmets grow longer over time due in part to increased wind tunnel testing. Soon cyclists were sporting helmets that doubled as back scratchers, sticking a foot up in the air when putting their head down. Many correlate this with the “Armstrong” era. 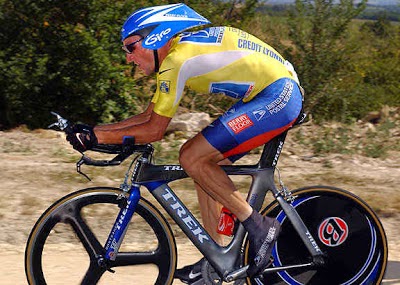 2000 – Italian headquartered Rudy Project naturally launched helmets in Europe before the US. In the year 2000 Rudy entered the US market with the T-Rex road helmet. According to Craig it was a nice foray into helmets, but pales in comparison to today’s technology. “We can make fun of ourselves now and say that it was hot, heavy, ugly, and stood out like a sore thumb!”

2001 – The Giro Rev V and other prototypes were made primarily for Armstrong, born from Texas A&M wind tunnel data, and never available to the general public.

2002 - Rudy Project releases its first mass-produced TT/triathlon helmet, the Syton. It was immediately lauded by critics, winning the ‘Timeless Design’ award from Men’s Journal and enjoying a great run, even up to a full decade later on the head of top pro Andy Potts at the Ironman World Championships. 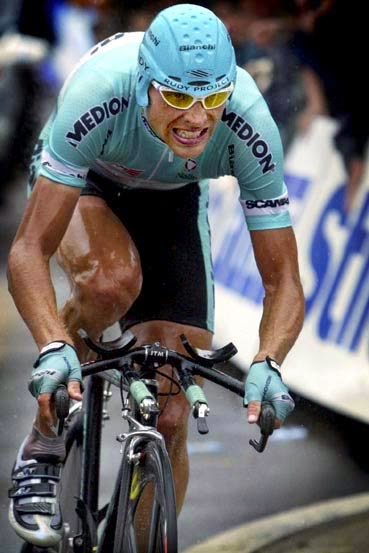 2003 – Jan Ullrich out time-trials Lance with this bad boy on his head (left), a custom made Rudy Project design available only in Europe.

Also, as is unfortunately often the case, it took a tragedy to get a safety rule change pushed through…

29-year old Kazakh rider Andrey Kivilev crashed and hit his head during the Paris-Nice race. He was not wearing a helmet, slipped into a coma, and subsequently died of his injuries. A full 12 years after initially attempting to require helmets, the rule was finally implemented and enforced. This sparked a flurry of retrofitting, as manufacturers attempted to revamp their existing TT shells to meet the safety standard.

Mid 2000’s – From its phenomenal early growth, triathlon stagnated a bit as a sport in the late 1990’s. It was primed to make an enormous comeback, but as late as 2004, Stewart Nixon recalls having a triathlon helmet shipped to him from France due to limited options. The US market would soon catch up.

2010 – Rudy Project and other companies begin to re-think wind tunnel results that led to the extreme elongated tails of the past, the underlying thought being that real life riding is different from pristine wind tunnel conditions. The result is that recent models demonstrate something of a compromise… no tail, or too short of a tail, and you end up with an inefficient aero shape that spikes drag. However if a tired rider regularly puts his/her head down with a long tail, they’ve essentially wiped out any aero benefit from the wind tunnel. 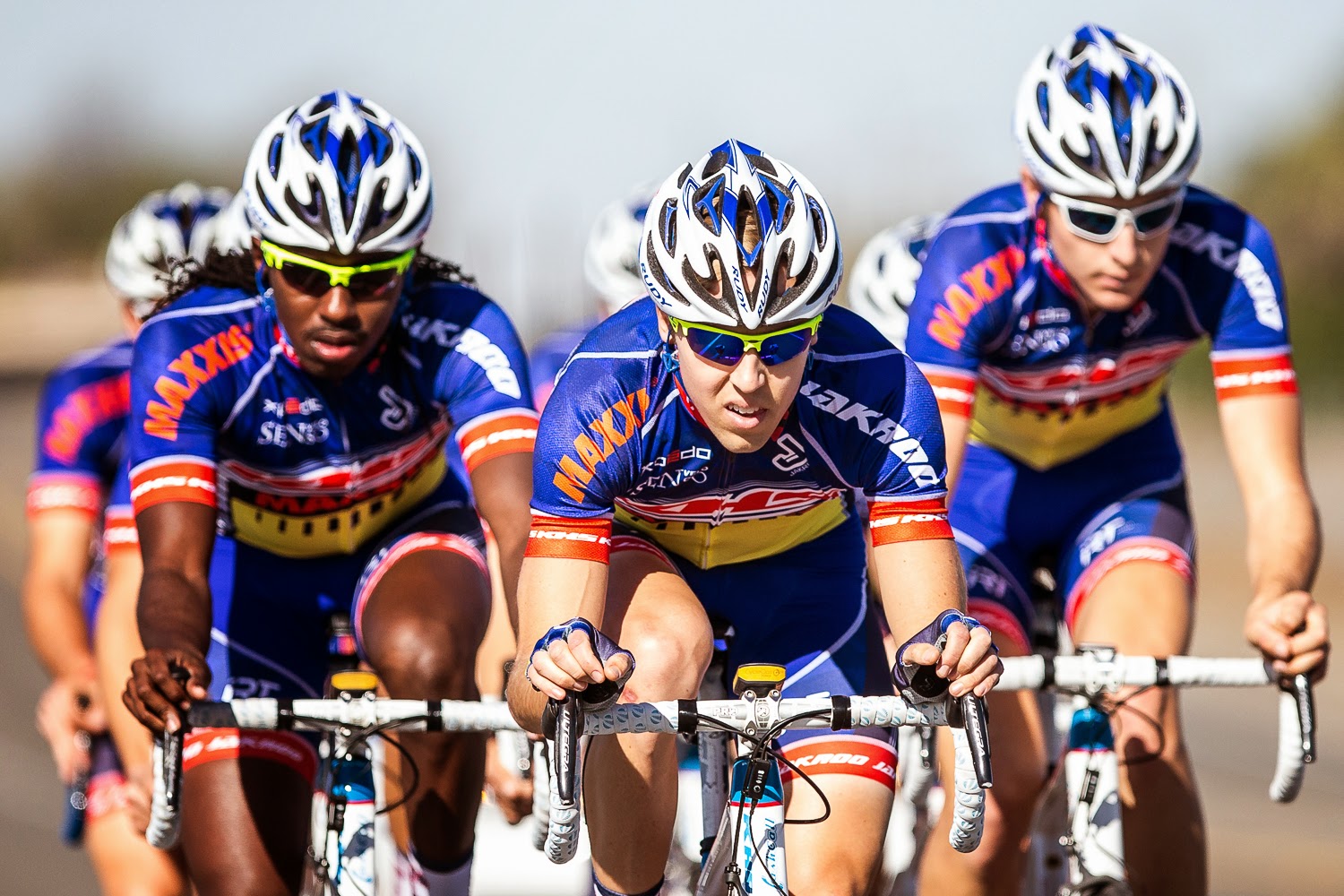 This is also the year that Rudy Project introduced their best-selling road helmet, the Sterling (above). Crafted with the aid of an old Italian hat designer, the Sterling has been called "the world’s most comfortable helmet."

2011 – With its combination of aerodynamics, massive exhaust vents to keep cool, and good looks, Rudy Project’s newly released Wingspan quickly dominates the prestigious “Kona Count” as the #1 helmet worn at the Ironman World Championships in Hawaii. 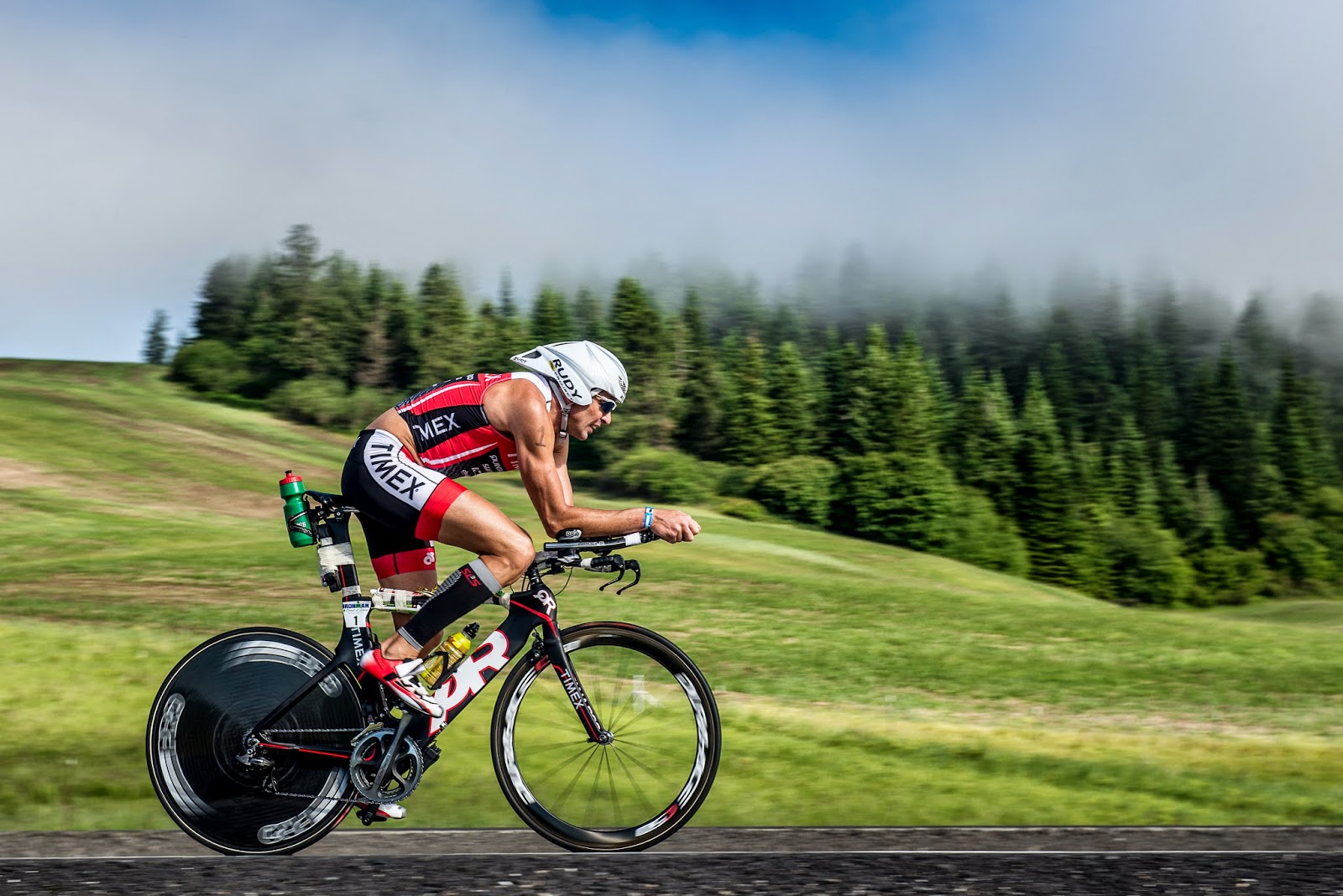 2013 – Rudy Project’s Wing57, the “ultimate speed monster,” as Craig puts it, is released to much fanfare. It is the first Rudy helmet available to the general public with an integrated shield, and like the Wingspan, was developed in collaboration with Cobb. As Andy Potts put it in our recent interview, “I feel like a fighter pilot when I wear it.”

2014 – Between the Wing57 and the Wingspan, Rudy Project dominates the Kona Count for the 4th consecutive year.

According to Craig, Rudy Project has another breakthrough product in the pipeline for the coming years that “will change the whole way people see helmets.” What will the next Rudy Project innovation be?? I guess we’ll just have to wait and see.

TripleThreatTriathlon.com is a rapidly growing triathlon site centered around a US national team. Age group triathletes are selected as representatives of their individual states and local ambassadors of the sport, while contributing to the team's collective, national goals.

Rudy Project designs and manufactures performance-oriented helmets, sunglasses, goggles and Rx/prescription eyewear solutions by applying advanced science, cutting-edge technology and innovative aesthetics. Designed and crafted in Italy since 1985, Rudy Project has grown quickly as a premier brand throughout North America. Rudy helmets were recognized as the #1 most worn aero / time-trial brand at the IRONMAN® World Championships Presented by GoPro™ in Kona, Hawaii for the last four consecutive years, and have been designated the Official Helmet of IRONMAN® for North America. Rudy Project offers unparalleled customer service backed by a Lifetime Replacement Lens Guarantee and an industry-leading three-year frame warranty. Learn more about Rudy Project at www.e-rudy.com.